Wimbledon 2018 Highlights Day 9: Roger Federer crashed out of Wimbledon while Rafael Nadal set up a semis date with Novak Djokovic

The Wimbledon 2018 men's singles semi-finals are set! Kevin Anderson reached his first Wimbledon semis and he will now face John Isner. In the second semi-final, Rafael Nadal will take on Novak Djokovic!

Nadal serving for the match

Rafael Nadal is up 5-4 in the final and deciding set. He needs a hold and he will advance to the semi-final of the Wimbledon

Quite possibly the best game of the Championship. Nadal and Del Potro go back and forth in a game that stretches to ten minutes, Nadal holds with a divine forehand down the line. Plenty of zip and punch on it to get it to swerve and land in. Nadal 5-3 in the fifth set. Del Potro to serve to stay in it

John Isner is into the semi-finals of Wimbledon 2018 after beating Milos Raonic. The American wins the third fourth set. With a 6-7 7-6 6-4-6-3 win over Raonic, he is into the last four where he will face Federer-slayer Kevin Anderson

John  Isner of USA has won the third set against Milos Raonic 6-4. He is up two sets to one and is now one set away from the semi-final

Rafael Nadal forces a decider against Juan Martin del Potro! He wins the fourth set 6-4 and we are going for the fifth set at Centre court

Raonic and Isner are tied one-set-all in the quarter-final! Both set went into a tiebreaker. Raonic won the first one and Isner was good to win the second

Juan Martin del Potro is giving Rafael Nadal a hard time! He takes the third set 6-4 and now leads two sets to one 5-7 7-6 6-4 in the quarter-final

Rafael Nadal and Juan Martin del Potro are into a second set tiebreak! Del Potro is already a set down in this game and needs to win this

Roger Federer is not going to the Wimbledon semi-final despite winning the first two sets. He lost to Kevin Anderson in a five-set thriller. His record after being two sets up is 266-3 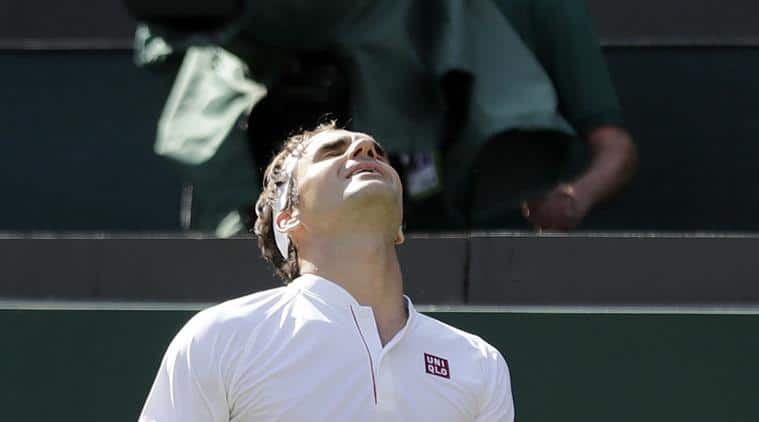 Defendin champion Roger Federer crashes out of Wimbledon 2018 after loss to Kevin Anderson in the quarter-final. He holds his serve and goes up 13-11 as Federer's return is out. What a win for Kevin Anderson

Kevin Anderson breaks Roger Federer for the fourth time in the match! This is the most important break for him as he will now serve for the match. He leads 12-11 in the decider

Its back to 11-11 as Anderson smashes a brilliant forehand. The South African produces two love holds in a row.

The Federer-Sachin love-in continues. Both being given a torrid time by Anderson ... #wimbledon— Andrew Miller (@miller_cricket) 11 July 2018

Anderson ties it back

Anderson comes back with a very easy service game. Once again they are both tied at 10-10 in the fifth.

Five sets and this time Federer holds to love & makes it 10-9.

Kevin Anderson manages to keep himself alive. Holds on for 9-9.

Anderson holds and it is now 8-8 in the fifth. Thrilling match... which way will it go?

Being scheduled to play last on Court One on ‘Manic Monday’ is something Novak Djokovic is getting rather used to – and also getting rather fed up with. A year after his 2017 fourth round match was postponed by 24 hours into what is a designated ‘rest day’ for the men, he narrowly avoided suffering the same fate again. With South African Kevin Anderson taking almost 3-1/2 hours to tame French showman Gael Monfils in a four-set thriller in the previous match, Djokovic was left with about two hours of daylight to complete his match against Karen Khachanov if wanted to avoid coming back on Tuesday again. It was not until he walked off court after booking his place in the quarter-finals that he heard how close he had come to being bumped off Monday’s schedule. “Post-match I heard that the organisers were planning to cancel my match if Monfils and Anderson went to a fifth. Luckily for me it didn’t happen,” Djokovic said after he romped to a 6-4 6-2 6-2 win to reach the last eight for a 10th time.