Exponent of the red surface finds transition to grass difficult, going out in Rd 2 of Major for first time in 4 years. 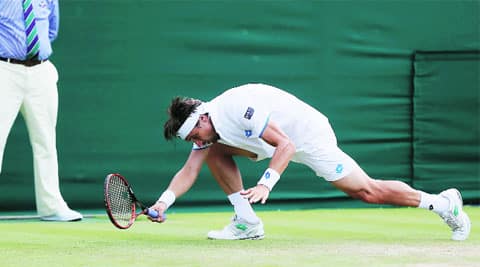 David Ferrer’s streak of reaching at least the third round at 17 consecutive Grand Slam tournaments ended Wednesday at Wimbledon with a 6-7 (5), 6-0, 3-6, 6-3, 6-2 loss to 118th-ranked qualifier Andrey Kuznetsov of Russia. The seventh-seeded Ferrer’s loss was his first in the second round at a major since the 2010 Australian Open.

He made the quarterfinals at the last 10 Slams, including being the 2013 French Open runner-up. In his other 46 career Grand Slam appearances, Ferrer only lost once to a player ranked lower than Kuznetsov — No. 126 Kei Nishikori at the 2008 U S Open.

Andy Murray gave Slovenian Blaz Rola a painful lesson in what it takes to be a grand slam winner, when he blasted the former college champion out of Wimbledon’s second round 6-1 6-1 6-0. While the British No.1 was winning Wimbledon last year, Rola was winding up a successful college tennis career for Ohio State University. The contrast in quality was stark on Wednesday

Some of the biggest cheers on an otherwise partisan Court One were reserved for Rola’s two winning games, the crowd willing him to avoid further embarrassment. But Murray, blasting winners from both sides of the court, put the 23-year-old firmly in his place to set up a third round clash with Czech Jan Hernych or Roberto Bautista Agut of Spain. Li Na proved too powerful for Austrian Yvonne Meusburger as she eased into the Wimbledon third round with a 6-2 6-2 win on Wednesday.

Also advancing was five-time champion Venus Williams who overcame a slow start to beat Kurumi Nara 7-6 (4), 6-1. The win meant that Williams reached the third round of a major for only the second time in her last 10 Grand Slam tournaments.

The 30th-seeded American won six straight points in the tiebreaker and ran off six straight games in the second set to beat Nara on Court 3. Williams served seven aces and had 43 winners. Nara took a medical timeout and received treatment from the trainer on her upper left leg. Williams, winner of seven Grand Slam titles, lost in the first round in her last appearance at Wimbledon in 2012.

In women’s play, eighth-seeded Victoria Azarenka was eliminated by Serbia’s Bojana Jovanovski, 6-3, 3-6, 7-5. Azarenka, a two-time Australian Open champion and former No. 1, was playing in just her second event since the Australian Open after being sidelined with a left foot injury.

The man who shocked Roger Federer at Wimbledon a year ago, Sergiy Stakhovsky, pulled off another surprise Wednesday. The 90th-ranked Stakhovsky used the same serve-and-volley style that worked against Federer in 2013 to beat 12th-seeded Ernests Gulbis 6-4, 6-3, 7-6 (5) and get to the third round at the All England Club.

Novak Djokovic showed that Wimbledon was no place for a 35-year-old warrior as he beat battle-scarred Czech Radek Stepanek 6-4 6-3 6-7(5) 7-6(5) in a hugely entertaining contest to reach the third round of Wimbledon on Wednesday.

Bidding to become the oldest man to reach the third round at the All England Club since 2007, Stepanek tried practically every shot known to mankind, and then some, as he tried to topple the top seed.

Left-handed Divij and his Chinese Taipei partner Lu squandered a comfortable two-set lead to lose 6-2 6-2 6-7 (3) 3-6 2-6 to Briton Jamie Delgado and Luxembourg’s Gilles Muller in the first round, which lasted two hours and 29 minutes. Raja and Demoliner suffered a 2-6 4-6 4-6 loss against 15th seeded pair of Juan-Sebastian Cabal from Colombia and Marcin Matkowski from Poland.

Li Na dreams of being a housewife

LONDON: Li Na looked at home on the grass of Wimbledon as she powered into the third round on Wednesday, but the second seed revealed that she dreams of becoming a housewife. Though the Australian Open champion eased to a routine 6-2 6-2 win against Austrian Yvonne Meusberger with a display of athleticism and aggression belying her 32 years, she is prepared to embrace a more relaxing environment when she finally calls it a day. Not for her the well-trodden path from tennis professional to coach or media pundit.

“You know, my dream for after I retire, I want be housewife,” the two-time grand slam winner said when asked whether she plans to put her journalism degree to use after she ends her playing career. Li, who suffered a first-round defeat at the French Open last month, secured her place in history by becoming the first Chinese grand slam winner when she was crowded champion at Roland Garros in 2011. That served to raise the hopes and expectations of the millions of fans in China who follow her matches across the globe.

Li has handled that pressure with aplomb, but she is clearly undaunted by returning to a more normal life at home with her husband, in spite of her past complaints that his snoring has cost her sleep ahead of matches. “He’s getting better,” she laughed. Li’s opponent in the third round will be unseeded Czech Babora Zahlavova Strycova, a 6-4 6-2 victor against 32nd seed Elena Vesnina.