After a strong start by Halep, winning the opening four games of the first set, breaking twice against the 7-time-Wimbledon winner, the Romanian set the pace of the game. She eventually won the set without dropping serve, 6-2. In the second set, Williams started off brightly making it 2-2, but Halep soon broke in the fifth game of the second set. Dropping her levels from there, she fell again to another break. Halep won the set and the Championship by 6-2.

She won her second ever Grand Slam title after winning the 2018 French Open, and that too under an hour.

Scroll below for Highlights:

Serena loses her first point, and it's visible that she has lost some spirit. Halep takes the opportunity and makes it 0-30. But Serena is made of sterner stuff, as the 23-time-Grand-Slam-winner makes it 40-30 with three points in a row. But after a brief rally, she hits the net and it's deuce. And she hits the net again! But Serena hits a return straight at Halep and makes it deuce again. Another winner, then another net from Serena. Third deuce, which Serena follows up with another net. Advantage for Halep. And the 27-year-old doesn't let go of that advantage and breaks again for a second time!

Serena knows that she has to do something soon, and she does it in the first serve itself. But Halep with her pinpoint serve in the final so far, makes it 15-15 in the next serve itself. Halep makes it 40-30 soon, and after getting a bit of a help from Serena's overpowered forehand, she wins the game.

Halep wins the first point, and after a brilliant rally with Halep running around the entire court she makes it 0-30. She fails to hit a return in the next serve and it is 15-30. But Serena is forced to let out a shout to return a Halep backhand, but it fell in the Romanian's favour as she won two break points. And after another brilliant rally, Halep breaks first in the second set. Serena completely misses the court with her backhand, almost nightmarish. What a match this is!

Halep wins the first point, and after a brilliant rally with Halep running around the entire court she makes it 0-30. She fails to hit a return in the next serve and it is 15-30. But Serena is forced to let out a shout to return a Halep backhand, but it fell in the Romanian's favour as she won two break points. And after another brilliant rally, Halep breaks first in the second set. What a match this is!

Halep is not going to let her serve down. And she makes sure of that with a brilliant start. She wins the second point with a groanful backhand, and then the third, tricking Serena with her dropshot first and then her smash. Serena is clearly on the backfoot. Halep wraps up the set soon after.

Serena is controlling her serve so well. Won the first point quickly, even the second one owing to a Halep slip. And then, tricks Halep with the direction of her backhand to make it 40-0. And, she holds to love. Serena knows the stakes, and she is fighting back.

Wow 😮 Halepeno rolls Through the 1st set vs SW23, 46 of last 50 slam winners in women’s finals won the 1st set, the last time someone came from set down to win @Wimbledon 🏆 was 2006 Mauresmo

After winning the first point, Halep loses her cool and hits the net and makes an unforced error back-to-back. 15-30. Halep is giving it all, as she groans to return a Serena forehand, and wins the next point. Her hunger is clearly showing, as she wins the game straight after the comeback.

Serena serves and Halep replies back perfectly winning the first point. Serena and Halep engage in a brilliant rally, pushing each other's levels and after making it 15-15, Serena shouts out load in excitement. The crowd is excited. Serena soon wins the game after Halep troubles her with a point. She is seemingly playing at her best now.

Halep serves and wins the first point. Serena fights back and fights back well. Halep makes her work very hard and makes it 30-15 after Serena is made to stretch and she hits the net. 30-15. Another unforced error from Serena and it is 40-15. Two set points for Halep. Serena's powerful forehand reduces it to just one, but another unforced error and she loses the set. Halep's foot has been on the gas and she hasn't let go from the start! She wins the first set.

Serena's serve and she does what she does best. First point and then second. A brief glimpse at Venus watching her, and she wraps it up quickly owing to Halep hitting the net at 40-0. Serena holds to love.

Halep wins the first point, but Serena is not letting it go easily. She follows each point with one of hers, and soon makes it deuce with a great forehand which Halep fails to return. From there, Serena wins her first break point, but loses the advantage due to an out. Halep makes the mosy of the second deuce, and gains advantage. After a brief rally, Halep finishes the game with a magnificent forehand keeping Serena standstill.

Serena serves and picks up the first point, and then forces Halep to commit a mistake to make it 30-0 soon after. Serena finds Halep on the backfoot on her third serve and makes it 40-0. And, she holds to love. Serena wins her first game of the final.

Halep doesn't make too much of a big deal about it, as she is helped by a Serena unforced error. Again. Five winners for Halep so far and no unforced errors. She is in the mood.

Dream start for the Romanian

Dream start for Halep, break and a hold in just four minutes

After Serena wins the first point, Halep is stretched to her limits and she wins the point with a brilliant backhand. Serena just stands still. After Halep makes it 15-30, Serena brings her power into play which makes Halep cover quite some ground. But, soon after Halep gets another break point. An exquisite return to a Serena serve, and Haleps breaks again!

Halep starts brightly and wraps it up quickly. Halep holds to love. Quite dominant from the start.

After Serena's first point from her serve, Halep levels it.  Serena's power makes it impossible for Halep to return and it is 30-15. But after a brief rally, Halep gets her first break point. And because of a Serena unforced error, Halep breaks in the first set.

Serena Williams and Simona Halep both come out on the Centre Court and warm up. While Serena has dropped two sets in the tournament this year, Halep has dropped only one. But, the Romanian has lost each of her past five meetings against the American. Marijana Veljovic is the Chair Umpire, and Serena Williams is serving first.

“Of course, I respect a lot what she has done and what she’s doing, but now I feel stronger mentally facing her. I think it’s a great feeling to face Serena in a grand slam final. If you are able to win, it makes it sweeter.”

“[Halep] finished the year No 1 twice in a row. I feel like she’s back. She wants to prove that she can do it again. You can’t underestimate her. She’s like a little powerhouse.”

Throwing it back to 2011, when a 19-year-old @Simona_Halep pushed @serenawilliams to three sets in the second round at The Championships

Eight years on and they're about to contest the #Wimbledon final... pic.twitter.com/ZZd6HIbOVW

Serena Williams has the upperhand on her 27-year-old opponent, Simon Halep, as in the 10 times they have met each other, the 37-year-old American has triumphed 9 times. But Simona Halep (7) is seeded higher than Serena Williams (11) though, owing to her maternity leave last year.

Time for the final

With the title on the line, expect the unexpected... #Wimbledon | @serenawilliams | @Simona_Halep pic.twitter.com/pl2sCjAsNM

Hello and welcome to the women's singles final of 2019 Wimbledon Championships between Serena Williams and Simona Halep, who would be meeting each other for the 11th time in history. Both of them have their eyes on winning the final, with Serena aiming for her eighth title and Halep aiming for her maiden title. Serena has her eyes set on equalling Margaret Court's record 24 Grand Slam wins. 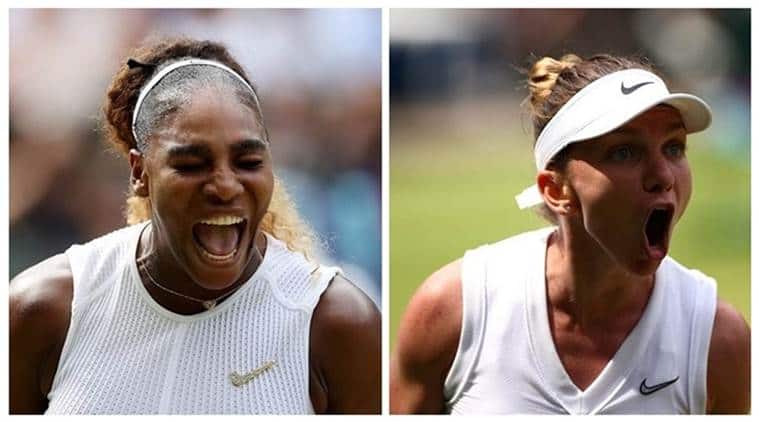 No matter who wins the title decider on Centre Court, the one thing for certain is that it will be a historic occasion. The 37-year-old Williams is chasing an eighth All England Club singles crown which would see her match Australian Margaret Court’s all-time record of 24 major singles titles.