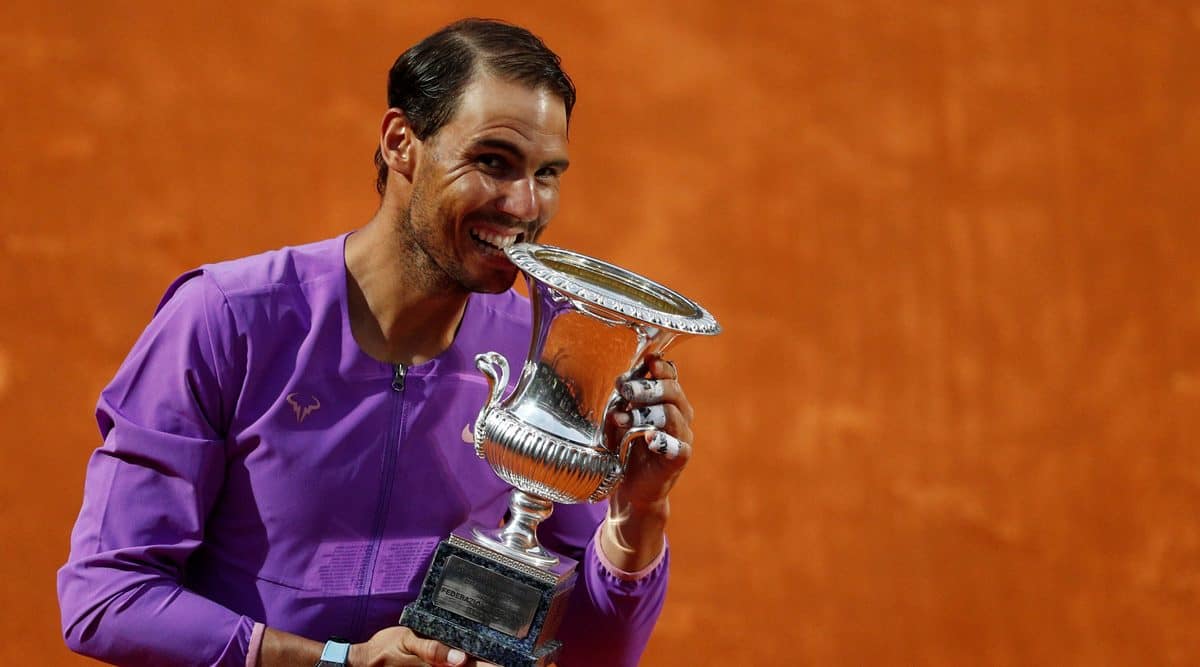 The heavy topspin. That lefty spin. The loopy trajectory.

Whipping forehands that produced an average of 54 revolutions per second — to Djokovic’s 45 revolutions — Nadal’s biggest weapon was in top form.

Another round of La Decima for Nadal, this time in Rome! 🏆

“I have been playing better and better with my forehand the last couple of weeks, getting to the confidence point,” Nadal said. “That’s a huge improvement for me, very important shot. Especially on clay it (gives) me confidence.”

The title also re-established Nadal as the overwhelming favorite for the French Open, where the Spaniard will be aiming for an even harder-to-believe 14th title starting in two weeks.

But Nadal preferred to focus on his achievement in Rome — at least for the moment.

“To have this trophy in my hands for the 10th time is something hard to believe,” Nadal said, recalling how he won his first title at the Foro Italico in 2005 as an 18-year-old, when he beat Guillermo Coria in a match lasting more than five hours.

“Now, 16 years later, to play in the final again is incredible,” Nadal said in Italian during the trophy presentation. “It’s difficult to describe. Without a doubt this is one of the most important places in my career.”

The top-ranked Djokovic spent nearly five hours on court Saturday, when he had to rally for a rain-delayed quarterfinal victory over Stefanos Tsitsipas before winning another three-setter over local favorite Lorenzo Sonego in the semifinals. Nadal played only once on Saturday, beating Reilly Opelka in 1 { hours.

“He managed to break my serve and played better. That’s it,” Djokovic said. “I had my shot to win it but wasn’t meant to be. I didn’t feel fatigue. Actually, I was very happy with the way I felt on the court. I could have gone for another few hours.”

Swiatek lost just 13 points. She said that every time she broke Pliskova’s serve she visualized that she was starting the match over “from the beginning.”

“I did that so well that I didn’t even know that it was 6-0 in the first set,” Swiatek said. “So that was kind of funny, because I asked my coach what was the score after the match. Mentally I was really in good shape today.“

It was the first double bagel in a WTA final in five years, since Simona Halep overwhelmed Anastasija Sevastova in Bucharest.

It was the 57th meeting between Nadal and Djokovic, which is the most matches between two men in the Open era. It was also their ninth meeting in Rome, where they have played more than anywhere else.

Djokovic now holds the slimmest of edges in the all-time series, 29-28, while Nadal holds a 6-3 advantage in Rome overall and 4-2 in Rome finals.

The 10,500-seat Campo Centrale stadium was only a quarter full due to the coronavirus pandemic. But those lucky few in attendance on an overcast day at the Foro Italico made themselves heard, shouting Djokovic’s nickname, “Nole, Nole,” on the big points, or “C’mon Rafa.”

There was a moment of concern in the first set when, for the second time this week, Nadal tripped over a line that appeared slightly raised. The incident, which resulted in a couple of bloody scrapes on his left leg, made Nadal livid.

“It’s dangerous,” Nadal said. “The other day was close to (having) an important injury. Today was the same. … The line was higher than the clay.

Nadal chased down a short ball from Djokovic and whipped a cross-court passing shot for a winner. Then his momentum made him slide into the doubles alley and his left foot tripped over the outside line, causing him to roll over onto the clay.

Nadal got up immediately and jabbed his arm into the air angrily and had a word with the chair umpire, who called on court workers to hammer the line further into the clay court.

Nadal had a similar fall in his quarterfinal victory over Alexander Zverev.

“I was upset,” Nadal added. “The problem is clear. The lines are plastic and sometimes the lines are moving around and they are a little bit higher than the clay.”