Ons Jabeur streak of 16 consecutive points, tied for the second-longest run at Wimbledon in more than 40 years. 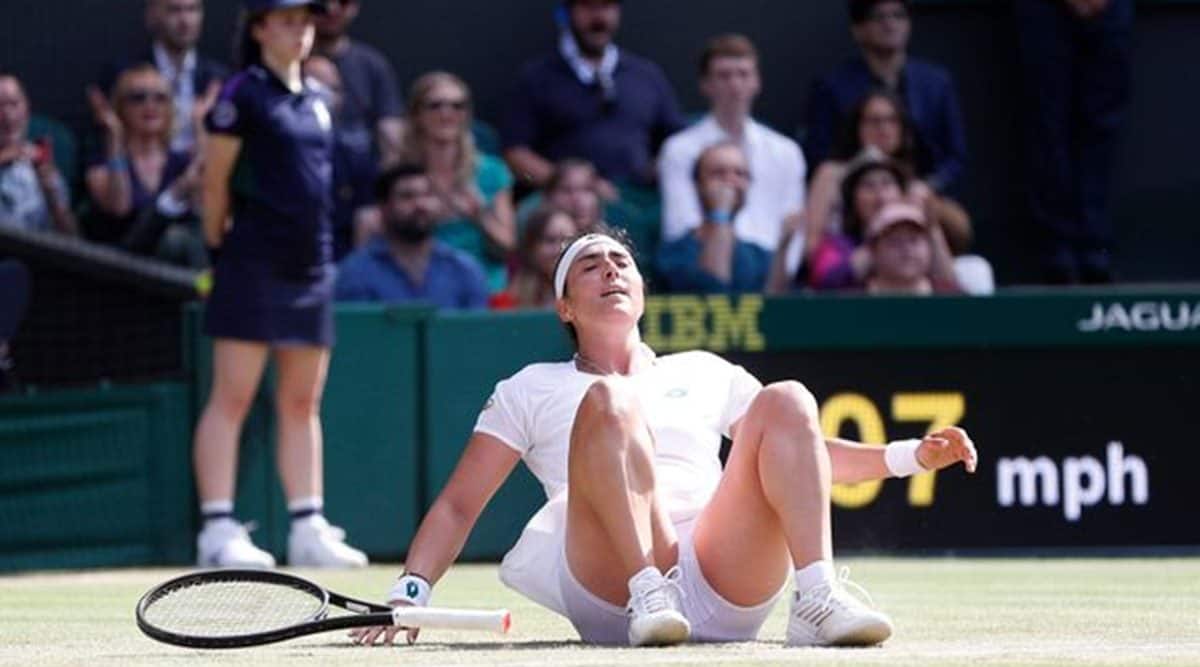 Sure, some of the little details of Ons Jabeur’s victory over 2017 champion Garbiñe Muguruza at Wimbledon are worth recounting, because they were far from mundane.

Her around-the-net-post winner. Her streak of 16 consecutive points, tied for the second-longest run at Wimbledon in more than 40 years. Her 29 break chances (yes, 29). She crouching down to vomit beneath the Royal Box because of a stomach issue (yes, you read that right, too).

Let’s instead follow Jabeur’s lead, though, and focus on the big picture. By beating the 11th-seeded Muguruza, a two-time major title winner, by a 7-5, 3-6, 6-2 score on Friday, Jabeur became the first Arab woman to reach the fourth round at the All England Club.

This comes two weeks after the 26-year-old from Tunisia became the first Arab to win a WTA title; she earned the trophy at a grass-court tuneup at Birmingham.

“It means a lot. Especially (with) so many Arab people watching me and supporting me. I’ve received a lot of messages from different people. It’s amazing. But I don’t want the journey to stop here. I want to continue,” said Jabeur, who is seeded 21st.

Tunisia’s @Ons_Jabeur comes from a set down to beat 2017 champion Garbine Muguruza 5-7, 6-3, 6-2 – Iga Swiatek awaits in the fourth round#Wimbledon pic.twitter.com/cGwkaOmc41

“I’m doing amazing. I’m getting more and more confident on the court,” she continued. ”I mean, hopefully, whoever is watching, I hope that so many (of the) young generation is watching, and I can inspire them.” Jabeur will try to get to the second Grand Slam quarterfinal of her career by defeating 2020 French Open champion Iga Swiatek on Monday.

And why not? Jabeur already has eliminated a pair of players who own multiple major titles this week: Muguruza and, in the second round, Venus Williams.

“Honestly, she’s just breaking down barriers. The first woman from her country to do anything that she’s doing,” Williams said about Jabeur. “She’s inspiring so many people, including me.”

One match — and one win — into their mixed doubles partnership at Wimbledon, and Nick Kyrgios is already learning from Venus Williams.

During their crowd-pleasing 6-3, 3-6, 7-5 victory over Austin Krajicek and Sabrina Santamaria at No. 2 Court on Friday, the fiery Kyrgios did the sorts of things he often does during matches: argue with the chair umpire and let real or perceived wrongs linger in his mind.

Kyrgios got agitated by a late line call early in the third set.

“I was, like, getting so mad at, like, past points, things that were a bit unlucky, and she was like, I don’t even remember that.’ She has such a fast memory. I think that’s one thing I actually have to take from her,” he said afterward. ”When a point is done, she completely moves on. She doesn’t dwell on anything that’s happened in the past. I guess that’s what’s helped her have so much success. That’s why she’s such a great champion.” They talked strategy (presumably) before points and shared celebratory fist bumps, and the occasional laugh, after many of them.

“I felt a bit of pressure playing with Venus. I just wanted to — not put on a good show or anything — I really wanted to win. Like, I’ve never really wanted to win a mixed doubles or a doubles match that much before. I was really trying hard,” Kyrgios said. “It was just a lot of fun. She’s iconic to the sport and she’s an absolute legend. She’ll go down as one of the greatest players ever to pick up a racquet when it’s all said and done.”

The Duchess of Cambridge took a bit of a detour away from the tennis during her latest visit to Wimbledon: She lent a hand in the one of the kitchens at the All England Club.

The duchess, formerly known as Kate Middleton, helped prepare some of the tournament’s famous strawberries and other desserts that will be served during the fortnight. Friday’s visit was meant to highlight the work of the club’s kitchens in preparing and distributing meals during the coronavirus pandemic.

Wimbledon was canceled last year because of the COVID-19 outbreak, the first time since 1945 that the grass-court Grand Slam tournament was not held.

Middleton, who is a patron of the All England Club, also spent some time at Court 14 with four-time Wimbledon semifinalist Tim Henman to watch Jamie Murray of Britain win a men’s doubles match.

After a stop at the Wimbledon Lawn Tennis Museum, she sat in the Royal Box on Centre Court, where British players Andy Murray and Daniel Evans were scheduled to play in consecutive matches Friday.

Just a few days earlier, the duchess went with her husband, Prince William, and their son, Prince George, to watch England beat Germany 2-0 in soccer’s European Championship at Wembley Stadium in London.

After 15 years together, Kiran Rao and Aamir Khan announce divorce