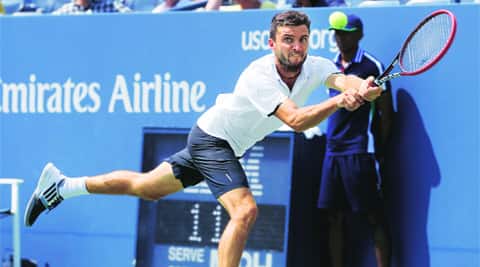 Frenchman Gilles Simon delivered the first big surprise in the men’s draw at the US Open, taking down fourth seed David Ferrer of Spain 6-3, 3-6, 6-1, 6-3 to move into the fourth round on a sweltering Sunday at Flushing Meadows.

With the loss Ferrer earned the dubious distinction of becoming the first top-10 men’s seed to be shown the exit while Simon moves on to face either big serving Croatian Marin Cilic or South African Kevin Anderson who clash later on Sunday.

A well-rested Ferrer, who reached the third round in a walkover after Australian Bernard Tomic withdrew with a hip injury, got off to a sluggish start but fought back to take the second.

But by the end of the nearly three-hour clash a distressed Ferrer was hunched over the courtside timing board between points dripping in sweat with the 26th seeded Simon finishing off the exhausted Spaniard on his third match point. “David is always fighting until the end,” said Simon, after earning just his second win in seven meetings with Ferrer. “We were 5-1 he destroyed me five times. I just stayed relax today and had nothing to lose. I had a good start and then you know how it is.”

Twice Australian Open winner Victoria Azarenka secured her spot in the last 16 with a 6-1, 6-1 win over Russian Elena Vesnina. Eugenie Bouchard, a semifinalist in the previous three Slams, including a runner-up finish at Wimbledon, had to fight to keep from joining the list of upsets, the seventh-seeded Canadian holding her nerve to earn a 6-2, 7-6(2), 6-4 win over Czech Barbora Zahlavova Strycova.

Serena Williams is the last American standing at the US Open after the remaining home-grown hopefuls said goodbye to Flushing Meadows on Saturday.

A total of 29 Americans (12 men, 17 women) started the year’s final Grand Slam on Monday and by the time the gates to the US National Tennis Center closed on Saturday only the World No.1 was still in the hunt for a singles title.

The last two hopes of the men’s draw, 13th seed John Isner and Sam Querrey, both bowed out in the third round, while Nicole Gibbs and Varvara Lepchenko also made third-round exits, leaving home fans pinning their hopes on Williams heading into the second week.

Five-time US Open champion Williams played her part in the American demise, dispatching three of her compatriots in rapid succession.

After dismissing Taylor Townsend in the opening round and Vania King in the second, Williams chased the 52nd ranked Lepchenko with a 6-3, 6-3 victory.

Williams, who has failed to reach the quarterfinals of any of the previous three Grand Slams this year, was just happy not to be one of the US casualties.

“I’ve been a casualty this whole year at Grand Slams,” said Williams, who will next face Kaia Kanepi of Estonia, a 7-5, 6-0 upset winner over 15th seed Carla Suarez Navarro.

Djokovic, a US Open finalist the last four years and winner in 2011, has also done his part to spoil America’s Grand Slam party. The Serb squashed another American hope on Saturday, pounding Querrey 6-3, 6-2, 6-2 to reach the fourth round for the eighth straight year while improving his record to a perfect 8-0 when facing US opponents at Flushing Meadows. Isner bombarded Philipp Kohlschreiber with 42 aces and never lost his serve but still dropped a 7-6(4), 4-6, 7-6(2), 7-6(4) decision to the German.

Australian Open winner Wawrinka was given a walkover into the fourth round when Blaz Kavcic of Slovenia defaulted because of a right foot injury.