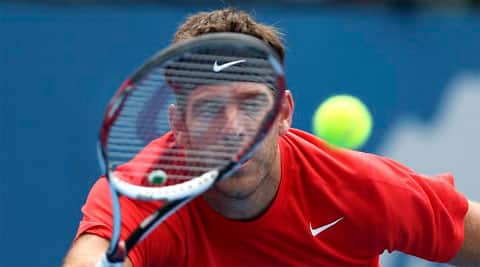 World number five Juan Martin del Potro began his 2014 season with a win, albeit a scrappy one over Frenchman Nicolas Mahut to advance to the quarter-finals of the Sydney International on Wednesday.

The Sydney warmup to the Australian Open has proved a graveyard for the seeds this week but the 25-year-old former U.S. Open champion avoided an early flight to Melbourne by coming back to win 1-6 6-3 6-4.

Rated a dark horse to win the title at Melbourne Park and add to his sole grand slam triumph at Flushing Meadows in 2009, the top seeded Argentine will next take on Czech veteran Radek Stepanek for a place in the last four.

The Italian world number seven took a medical time-out in the second set to have treatment on her lower back, raising concerns over her fitness ahead of the year’s first grand slam.

One-time Wimbledon semi-finalist Pironkova will play second seed and former Wimbledon champion Petra Kvitova, who wore down Lucie Safarova 7-6 6-2, for a place in the final.

The invitational Kooyong Classic kicked off in Melbourne’s leafy eastern suburbs on Wednesday, with a smattering of men’s top 10 players warming up at the eight-man exhibition, which offers the same surface used at Melbourne Park.

World number seven Tomas Berdych roared back from a 5-2 deficit in the first set to overhaul Spaniard Fernando Verdasco 7-5 6-2 in his first hit-out of 2014 in brilliant sunshine.

World number nine Richard Gasquet of France nearly suffered an embarrassing defeat to plucky teenager Jordan Thompson, and had to save two match points before fending off the 321st-ranked Australian 7-5 3-6 7-6 (7-4).

Thompson, who won a wildcard play-off for the Australian Open, was a late replacement for defending champion Lleyton Hewitt, who pulled out of the tournament citing fatigue.

Sam Stosur’s stuttering revival after a dismal Hopman Cup continued with a second straight win at the Hobart International in front of home fans.

The former U.S. Open champion had to save two match points against 54th-ranked Frenchwoman Kristina Mladenovic as she laboured through a 6-4 2-6 7-6 (9-7) match blighted by an astonishing 22 double-faults from both players.

World number three David Ferrer, bidding for his fourth straight Auckland Open crown, kicked off his 10th appearance in the tournament with a 6-7 (7-5) 6-3 6-1 win over American Donald Young.