French Open, Novak Djokovic vs Rafael Nadal match highlights:  Is Nadal on course for a 22nd grand slam and a 14th French Open? That would mean Djokovic would need to win three more to overtake him. Djokovic’s game tonight was riddled with errors. The drop shots worked, but points he should have easily put away were instead thrown away.  Djokovic did briefly turn the tables on Nadal by winning six of the last seven games in the second set to go one set all and put the match in the balance. But even with the temperatures dropping and his desired spin missing, Nadal held on and ground out a good win to advance to the semifinals.

"To play against Novak it is only one way. You fight in the first point and the last," says Nadal.

Nadal wraps this up without giving Djokovic the chance to test his luck in the fifth set. Nole immediately heads for the exit. Nadal will savour this one. Vamos!

Five match points for Nadal. A remarkable comeback indeed. But wait, Djokovic pulls back two points. It is now 3-6. Nadal to serve.

These mistakes by Djokovic will haunt him. He gave away several cheap points. Nadal leads the tie breaker by 5-1.

The fourth set will be decided by a tie breaker! Yes, you heard it right. Djokovic needs this to stay in the game and Nadal to wrap this up early and call it a night.

Did I say earlier that this fourth set was a breeze in comparison to the first three? Forget it. We just hit the four-hour mark and we are yet to wrap up the fourth set or, perhaps, match.

Oh! That drop shot again from Djokovic! Lovely, lovely soft hands from the Serb, who majestically slices the air to angle his bat in anticipation for that Nadal return shot.

Nadal stages his own mini comeback

Nadal makes it 5-5. He has a determined look on his face, unlike Djokovic who looks somewhat deflated at the moment. Remember the World No 1 was leading 4-1 at one point in this set.

And Nadal survives and how? How I tell you, it is Djokovic unforced errors hurting his game again. He needs to convert these tight points into winners to have any chance of taking this to the fifth set. Djokovic leads 5-4. Nadal to serve.

Djokovic nervously taps the ball for what seemed like forever after a faulty first serve. The nervousness is visible. An enforced error by the Serb makes it 30-30.  Then he goes on to throw away a set point bringing Nadal back into this game.

Nadal has an edge over Djokovic, it is still his match to lose. 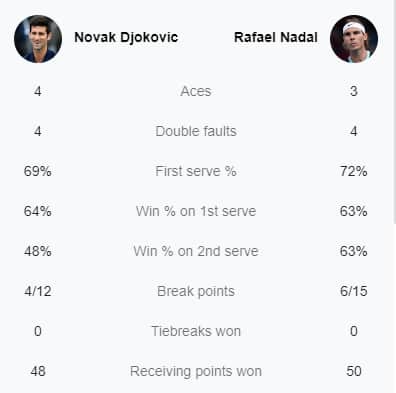 Fans of both players briefly got into a cheering contest before the umpire intervened and asked the raucous crowd to settle down. So far Djokovic is running away with this fourth set unless Nadal finds something in his reserves.

Will this go to the fifth set?

The good news: this set has progressed quickly without any lengthy rallies. The bad news: This is likely to go to the fifth set. As things stand, Djokovic is leading 4-1 with Nadal to serve.

Nadal drops serve, giving Djokovic a 2-0 lead. The Serb will look to tighten the screws after getting a head start in the fourth set. Once again there appears to be a shift in momentum. He stays true to his form and wins the third game too. This match has five sets written all over it.

Oh my! Djokovic is angry with himself after nearly coming close to returning a cross-court smash from Nadal. The Serb angrily lashes at the net with his racquet.

Djokovic holds serve for the first time after losing the first game of the last three sets. One of his drop shot winner even impressed Nadal to the point that he applauded with his racquet in one hand.

Unforced errors are hurting Djokovic's game. Trailing 30-40 in the eight game, he hits the ball wide and outside the line. Nadal takes the third set and leads the match 2-1.

Nadal makes a quick work of that game and extends his lead to 5-1. This is almost an unassailable lead, he is poised to comfortably take the third set. Nadal will serve for the third set.

A double fault hands Nadal a break point. And Djokovic then hands him a double break. Nadal leads 4-1 against Djokovic.

Did I just see Nadal do a tennis version of the helicopter shot? A ferocious forehand sent the ball racing down the line and the swing saw his racquet whip back behind his head.

French Open 2022: Night scheduling of Djokovic-Nadal blockbuster may tilt the scales in the Serb’s favour

Djokovic would prefer the slower and cooler conditions of the night, while Nadal would rather play in the day.

Following the conclusion of his third-round victory at Roland Garros this year, Novak Djokovic was clear in his preference for the scheduling of a potential quarterfinal clash against Rafael Nadal. “All I’ll say is that Rafa and I might make totally different requests,” the Serb said.

The scheduling of the biggest showpiece tennis match of the year has come into question considering it can be hugely significant in declaring a favourite. Djokovic would prefer the slower and cooler conditions of the night, while Nadal would rather play in the day. In fact, the Spaniard does not believe claycourt tennis should be played at night at all. “I don’t like night session on clay. I am very clear with that,” he told reporters following his third-round win last week. (READ MORE)