By rallying for Peng Shuai, WTA hits a winner against China

It is a welcome change when a global sports body puts human rights and well-being of a player over a billion-dollar sponsorship deal. 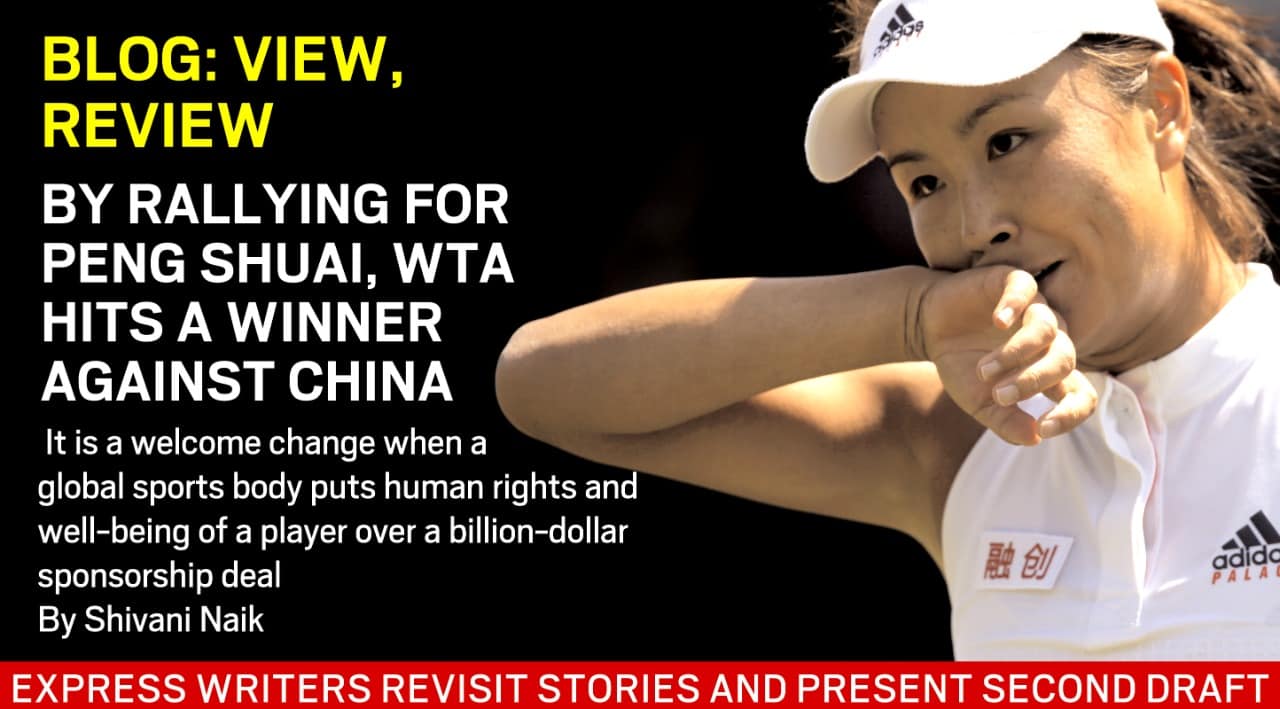 By rallying for Peng Shuai, WTA hits a winner against China

The biggest tennis stars around the world currently, might not be well-versed in a law graduate’s threadbaring of personal liberty.

They might not have heard of Thomas Jefferson’s impassioned insistence on the unremitting spirit of the Habeas Corpus writ, which bodily safeguards an individual _ often wrongly condemned. But they don’t shy away from a baseline slugfest, when drawn into one, no matter how mighty an opponent. And they’ll rally around a peer as a fraternity, if one of them is in peril.

Those like Serena Williams and Novak Djokovic have been at Slams and walked the same locker rooms and courts as Chinese former Wimbledon and French Open doubles champion, Peng Shuai.

So when the Chinese champion went missing, after posting about sexual assault by a high-ranking Chinese government official, the tennis world, with authorities like WTA and ATP at the forefront, found the precise vocabulary for their concern. They demanded that Peng Shuai be brought out in the open, from what appears to be a forced disappearance, following her revelations.

Shuai had posted on Chinese social media on November 2 that a former Vice Premier, Zhang Gaoli, now 75, had sexually assaulted her one afternoon at his home. “I never consented that afternoon, crying all the time,” she wrote. An alleged subsequent consensual relationship between the two – mentioned in unverified, translated post which surfaced – could not allay fears, which are growing about her safety.

The most recent post, a confrontational one with WTA – credited mysteriously to Shuai – barely convinces anyone, considering it gives no assurances of her re-appearing in public. And it ends with a staple “commitment to help Chinese tennis,” almost a giveaway of forged authorship. Nothing addressed the serious allegations that were first made.

A Tweet from Chinese journalist Shen Shiwei’s Twitter account allegedly showing recent photos of Chinese tennis player Peng Shuai, which have not been independently verified by Reuters, are seen in this screen grab obtained via social media on November 20, 2021. Shen Shiwei/Twitter/via REUTERS

So trust Naomi Osaka to say it as it is when she tweeted out support starting with: “Censorship is never ok at any cost….” The WTA runs 11 tennis tournaments in China, and had in 2018 signed a mammoth $1 billion deal over 10 years, according to SportBusiness Journal, that made Shenzhen hosts of the women’s flagship year-end event. In doubling the prize money to $14 million, pipping cities like Manchester, China had dwarfed all other sponsorship deals in women’s tennis. When WTA chief Steve Simon made clear their intent to pull out if Peng Shuai’s safety status was not determined, the governing body showed it was willing to junk big money for one of its leading players.

Such an adamant stance has not always been taken vis-a-vis China. The NBA previously were compelled to lie low and pull back one of their franchise’s remarks that emanated around Hong Kong pro-democracy protests. However, the Shuai matter isn’t just a political opinion expressed on a remote subject. It gets very personal, as one of the most celebrated players of recent times – tennis’s own, remains in jeopardy. And for once, a sporting body is refusing to simply look away after shaking hands with China over a stash of a billion.

Peng Shuai, who Djokovic said was someone who he had seen on Tour in previous years, who Serena Williams hopes will be ‘found as soon as possible’, and support for whom is gaining in decibel with Kim Clijsters, Patrick McEnroe, Martina Navratilova, Stan Wawrinka, Chris Evert, Alize Cornet, Nicolas Mahut and Agnieszka Radwanska speaking out, is a flesh-and-blood person, a peer, forcing the big names to snap out of their insular world.

I am devastated and shocked to hear about the news of my peer, Peng Shuai. I hope she is safe and found as soon as possible. This must be investigated and we must not stay silent. Sending love to her and her family during this incredibly difficult time. #whereispengshuai pic.twitter.com/GZG3zLTSC6

It’s completely in line with tennis turning the mirror inwards and opening transparent dialogues on issues of mental health and post-partum and generally enabling a voice for women.

At the other end of the spectrum is China, turning more opaque by the day while cracking down on what is being called “chaotic celebrity fan culture.” Business leader Jack Ma was ofcourse the most high-profile instance of what is a troubling phenomenon in China: mysterious disappearance from public view after criticism of the ruling party.

Movie female actor and director Zhao Wei, a darling of the nation since her TV series ‘My fair princess’ of 90s, also a Burberry and Fendi brand ambassador, was “scrubbed” off the internet, and evidence of her career and fame literally wiped clean, by the regime.

Into this cauldron, went Peng Shuai’s revelations. She, though, is at a frightful intersection of having accused a Chinese politician of appalling wrongdoing, and at a time when the #MeToo movement is being stubbed, and feminism being throttled, in the country. The belligerence of the state cracking down on celebrities and billionaires, understandably, sends shivers down spines.

Tennis spines, led by Naomi Osaka and Serena Williams, have been gloriously ramrod over the last few years. Women’s tennis might not boast of a definitive Number One or be mesmerized by a Big 4 with their sublime games. But it has thrown up some remarkable personalities, diverse and courageous, pushing the limits of self-assertion in women’s sport.

A country that treated the 2008 Olympics as a nationalist showcase, and is heading into the frozen-cream variety of more of the same coming February at the Winter Games, has run into a sport that prizes a women’s right to speak, above what is mechanical backhand-forehand precision. Sport has historically worn blinkers to keep out uncomfortable truths at the altar of sponsorship money, and almost all countries have viewed medal success as an extension of their foreign posturing. Tennis, always free-spirited and fiercely individualistic, doesn’t typically lend itself to this bespoke nationalism.

Women’s tennis today exists in perhaps the most articulate of progressive environments. It is more visibly international in its reach than China’s entertainment industry and businesses. And serious accusations of sexual assault won’t just be allowed to slide. Tamping down on voices of female tennis players demanding that their fellow player be heard, China is about to find out, might not be as easy as to make one of their celebrities vanish.