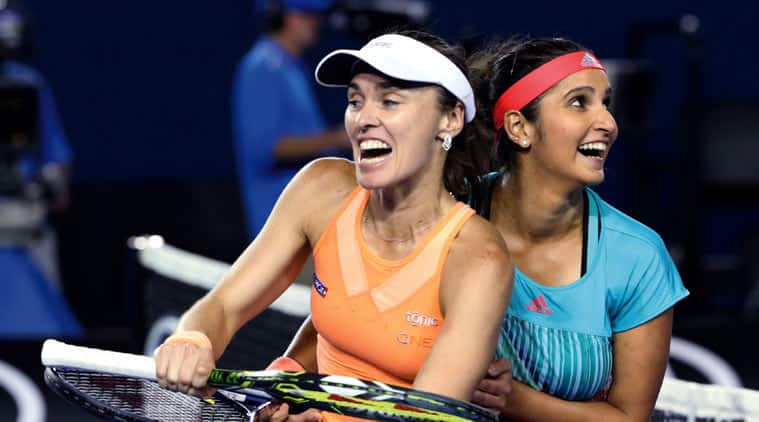 The Santina juggernaut rolls on as Sania Mirza and Martina Hingis win their 3rd Grand Slam title, 36th match on the trot. The top seeds were challenged in the opening set but sealed the second in emphatic fashion.

The match, as it happened!

1250 hrs IST: 5-2, and Sania-Hingis will now serve for the set, match and CHAMPIONSHIP

1245 hrs IST: Hradecka-Hlavackova are up for a fight. Break serve to make it 4-2 in the second set. They have switched gears and are very aggressive in the middle

1240 hrs IST: Meanwhile, here’s what Andy Murray is upto ahead of his semis clash

.@andy_murray‘s making some last minute touch ups to his serve ahead of his #AusOpen semifinal. pic.twitter.com/bijheK6Zw9

1236 hrs IST: Sania and Hingis back to doing what they do best – dominate. In complete control of the title clash, lead the second set 4-1

1223 hrs IST: Sania-Hingis back to dominating ways in the second set. Take a 2-0 early lead

1212 hrs IST: Sania-Hingis seal the tie-break 7-1, opening set 7-6. The top seeds were pushed in the opening set but Santina found their rhythm towards the end

1159 hrs IST: Hingis holds serve for the first time in the match. Top seeds go 6-5 up in the opening set

1154 hrs IST: Santina, as they call themselves, break back! It’s 5-5 in the opening set. Hingis to serve

1150 hrs IST: Hradecka-Hlavackova seal the 19-point rally to make 40-40. Engaging tennis on exhibition during the rally. Hingis was trying to absorb the pace but Hlavackova fired a winner

1147 hrs IST: Sania loses here serve, the pair of Hradecka-Hlavackova to serve for the set at 5-4

1140 hrs IST: Three service breaks a piece and it’s 4-4 in the opening set. Both teams yet to find their feet in the women’s doubles final

1135 hrs IST: Break after break in the women’s doubles final. Hingis loses her serve to trail 3-4

1127 hrs IST: Sania fails to hold her serve. Hradecka-Hlavackova have been impressive so far. Lead 3-2

Not a hair out of place for Lucie Hradecka on court tonight #ausopen Watch more https://t.co/Ek545ZyE1J pic.twitter.com/AyIOBxxPM1

1122 hrs IST: Sania-Hingis reply in style. Break Hradecka’s serve to level it at 2-2

.@mhingis & @MirzaSania already have two Aussie titles in 2016. Can they make it a third at the #AusOpen? pic.twitter.com/29kmkrYWkO

1115 hrs IST: Sania and Hlavackova hold their serves. It’s 1-1 in the opening set

1112 hrs IST: Sania holds her serve without any trouble to go 1-0 up in the opening set

1109 hrs IST: Sania and Hingis have dropped just one set in the Australian Open – in the quarters. They won their semis in emphatic fashion – 6-1, 6-0

1105 hrs IST: Sania and Hingis have won 35 matches on the trot and are a win away from their second title of 2016. The top seeds start as favourites in the title clash

1100 hrs IST: Sania Mirza and Martina Hingis are out in the middle. They are up against the pair of Hradecka and Hlavakova Sania Mirza and Martina Hingis will take on seventh seed pair of Andrea Hlavackova and Lucie Hradecka in the final. Sania Mirza and Ivan Dodig got the better of Leander Paes and Martina Hingis 7-6(1) 6-3 in the quarterfinal.

From February 15, you can book e-tickets on IRCTC only 6 times a month