A stretch too far for David Ferrer

Spaniard ousted in second round at Barcelona, Nadal labours to 7-6(2) 6-4 win over Ramos. 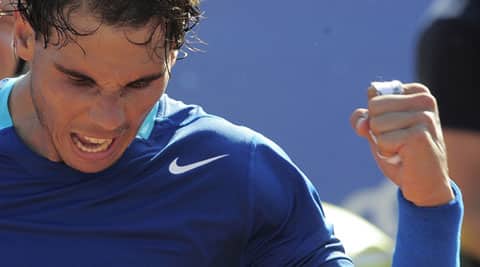 Rafael Nadal who had suffered a surprise loss to Ferrer at last week’s Monte Carlo Masters, was scratchy against Ramos, ranked 103 in the world (AP)

Second-seeded David Ferrer was ousted from the Barcelona Open by a Russian opponent for the second straight year and defending champion Rafael Nadal labored to victory on Wednesday.

Ferrer was unable to find his rhythm in losing 6-4, 6-2 to Teymuraz Gabashvili in his opening match while Nadal struggled past fellow Spanish player Albert Ramos 7-6 (2), 6-4.

Nadal eventually overcame his 103rd-ranked opponent to reach the third round, rebounding from a surprise loss to Ferrer in the Monte Carlo Masters quarterfinals. “After losing in the Monte Carlo I wanted to raise my game here,” Nadal said. “It just took a while.”

Eight-time winner Nadal was made to work against the stubborn Ramos, who broke back in the 11th game to force the first-set tiebreaker. Nadal eventually came out on the winning end of a long rally of baseline shots for a 4-2 lead as he went on to take the set.

Nadal was steadier after that but still could not shake Ramos. He sealed it after a quick talk with the tournament doctor by breaking his fellow left-hander to win the match. “I had to accept that I was going to be made to work today, that I was not playing at my best level,” Nadal said. “But I got through it.”

Nadal will face Ivan Dodig next after the Croatian dismissed Feliciano Lopez of Spain 6-1, 6-4.

Ferrer, meanwhile, will not be facing Nadal in the final for a fifth time after the 55th-ranked Gabashvili dominated Ferrer on his favored clay to reach the last 16.

Gabashvili kept Ferrer running to the corners, and the fifth-ranked Spaniard was surprisingly unable to keep up with shots he normally returns, looking fatigued at times.

Ferrer netted to give his opponent a triple set-point opportunity to close out the first frame, which Gabashvili did by smashing a crosscourt forehand Ferrer couldn’t handle.

Gabashvili maintained his play from the start of the second set to race to 3-0 when Ferrer skied his return high and into the crowd. Ferrer, who lost at this same stage last season to Dmitry Tursunov, slapped a crosscourt forehand long for Gabashvili to clinch it.

“Three weeks ago I lost to Ferrer in Miami but I dominated that first set. Today, I wanted to maintain my energy and keep it going, which I did for (90) minutes, but any more and it might have been tougher to win,” Gabashvili said after winning for the first time on the third try against Ferrer.

Ferrer wasn’t the only significant player to exit early as third-seeded Fabio Fognini retired to injury while losing 6-0, 4-0 to Santiago Giraldo of Colombia. Eighth-seeded Alexandr Dolgopolov of Ukraine was also ousted by Spanish player Albert Montanes 7-6 (5), 6-3.

Somdev Devvarman finally tasted victory after a long while when he won his first round match of the doubles event of the ATP 500 Barcelona Open along with Croatian partner Ante Pavic, here today.

Somdev, who has been enduring rough patch in singles, and Pavic won 6-4 6-4 against local wild card entrants Roberto Bautista Agut and Albert Montanes in their opening round match of the euro 2,127,035 clay court event.

The win is Somdev’s first in almost two months and also first in doubles in 2014 season, having suffered three defeats at the Challenger level.

Somdev and Pavic converted one of three break chances and saved both the breakpoints they faced in the first set.

They lost serve twice in the second set but managed to break the Spaniards thrice to clinch the issue in one hour. They next face unseeded pair of Jesse Huta Galung and Stephane Robert, who knocked out fourth seeds David Marrero and Fernando Verdasco, in the quarterfinals.

Perumal, FIFA’s most wanted, arrested again, this time in Finland