The Indian women's recurve team began India's gold rush with a 5-1 triumph in the Stage 3 event. 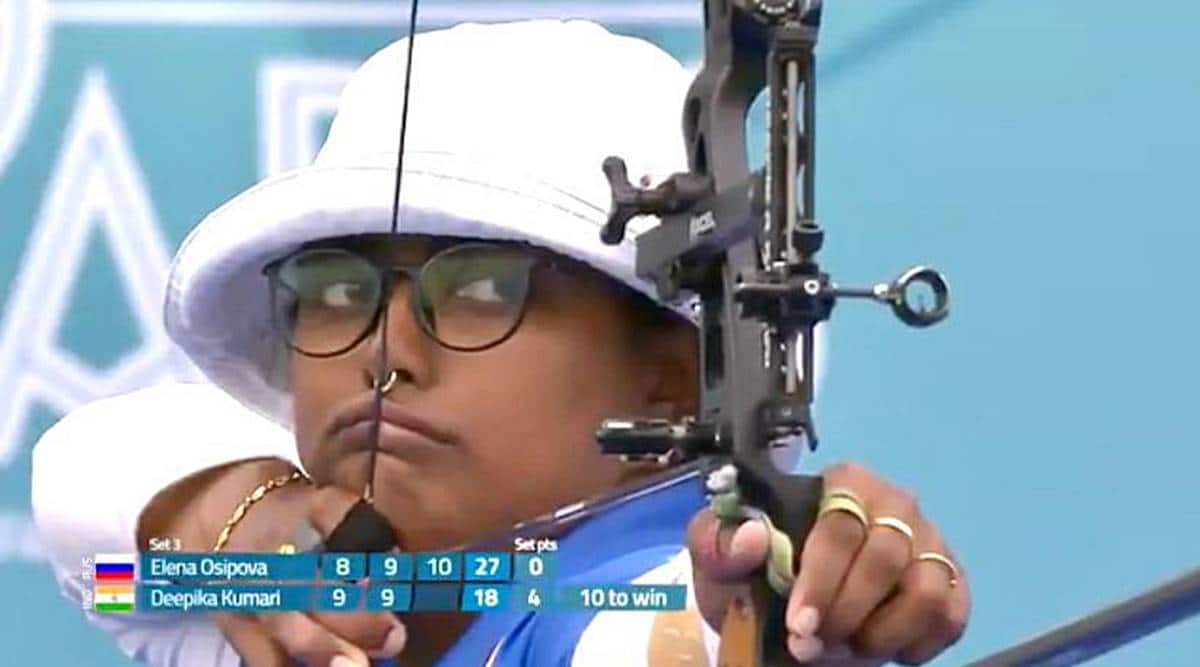 Star archer Deepika Kumari led the show with supreme authority to grab a hat-trick of gold medals as India made an unprecedented clean sweep at the World Cup Stage 3 here on Sunday for a perfect build-up to the Tokyo Olympics in less than a month’s time.

In the absence of the world number one Korea, the Indians faced little challenge to win the women’s individual, team and mixed pair events with Deepika a constant in each of them, playing back-to-back four matches in less than five hours.

This is going to take Deepika to the number one spot in the world rankings on Monday!

Having secured Olympic qualifications, Korea, along with other Asian heavyweights like China and Chinese Taipei, skipped all the World Cups in the build up to the Tokyo Games.

India topped the medals tally with four gold medals as Abhishek Verma had clinched the solitary top medal in the compound section on Saturday.

India’s gold rush began with the women’s recurve team of Deepika, Ankita Bhakat and Komalika Bari notching up a comfortable win over Mexico, shrugging off the disappointment of missing Olympic qualification last week.

In a repeat of the World Cup first stage final where they struggled to clinch the gold, the trio this time did not even drop a set to win their second world title in two months.

Eyeing their first-ever gold medal together, Deepika and husband Atanu Das, who are India’s best medal hope in archery in the Olympics, bounced back from a 0-2 deficit to down the Netherland’s Sjef van den Berg and Gabriela Schloesser 5-3.

Deepika Kumari is in the form of her life. 🇮🇳🔥#ArcheryWorldCup pic.twitter.com/bMdvvGRS6i

That was the only time India faced some challenge on the final day here as they displayed fine composure to reign supreme.

“This is the first time I’ve won all three medals in a World Cup. I’m really happy but at the same time, I’ve to continue improving as we have some very, very important competitions lined up,” Deepika said.

Less than a month from now, the Indian archers will be chasing their elusive Olympic medal dream among the best in the world.

“We do not have any Olympic medal in archery, so it’s really important that we keep improving and keep up the show,” she said.

In the semi-final, Deepika used all her experience to produce two spectacular opening sets to lead 4-0 against 20-year-old Ana Vazquez of Mexico before sealing a 6-2 win.

Deepika shot 29 each in the first two sets, while an under-pressure Ana faltered with two 8s to concede the match.

In the mixed pair final, fifth-seeded Atanu and Deepika complemented each other well as the latter came into her own after a sluggish start to give themselves a perfect anniversary gift in advance.

“It feels amazing. First time we won the final together, it feels so happy,” Atanu said after their win.

The two got married after a two-year courtship and would be celebrating their first wedding anniversary on June 30.

“It feels we are made for each other. But at the ground we are not couple but like just other competitors, we motivate, support and back each other,” Atanu said.

Incidentally, this was also a first mixed pair gold medal for the former world number one Deepika, who has five silver and three bronze medals in the event.

Her last mixed pair final appearance was also with Atanu in Antalya World Cup 2016. The duo had lost to Korea.

They shot a poor 52 to lose the second set by three points.

Leading 3-1, the Indians had another round of consistent shooting with a 55 but the Mexicans failed to equalise and lost the third set by a slender one point to suffer a second successive defeat this year.