Three years after breaking collarbone when a car hit her outside JLN stadium, 19-year-old sprinter wins 100 metres gold in Under-23 championships 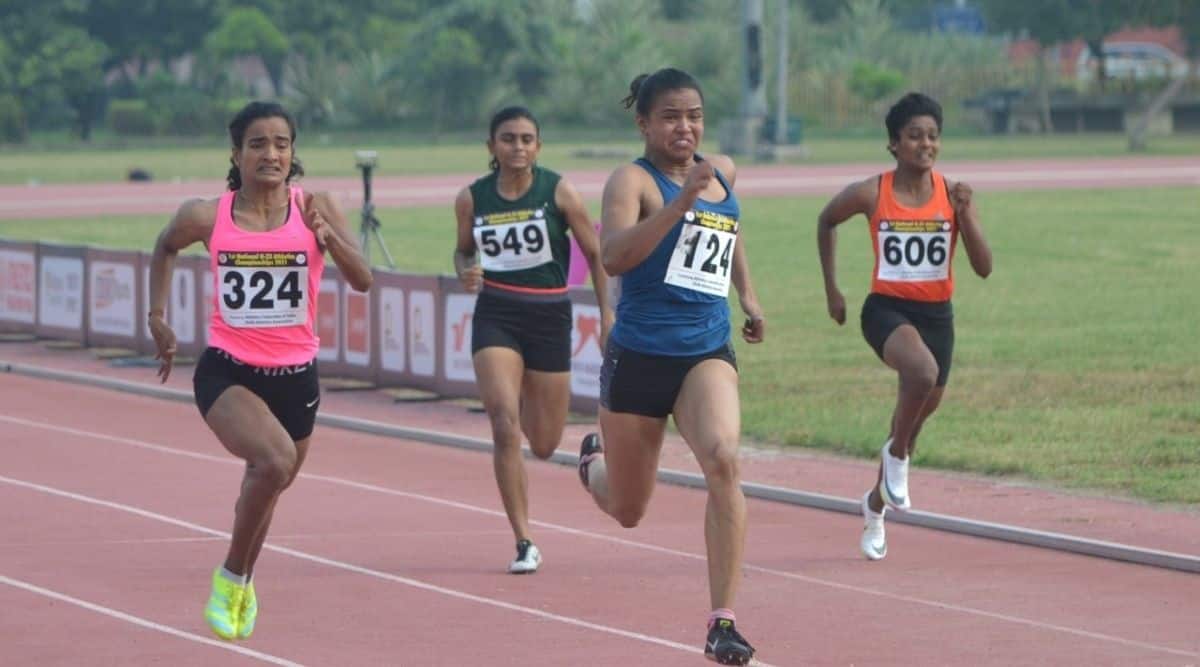 On Tuesday, almost three years later at the same venue, the 19-year-old won the 100m title with 11.54s on the clock at the ongoing U-23 Nationals (Pic: Andrew Amsan)

Every time sprinter Taranjeet Kaur steps out of the gates of the Jawaharlal Nehru Stadium in New Delhi, dread fills her heart. It was in 2018 that she was hit by a car about 50 metres from the main gate, leaving her motionless by a pavement. For the next 15 minutes, Taranjeet stared at a group of onlookers as none of them approached to help.

“An archery coach recognised me and rushed me to the hospital. My collarbone was broken in three. I couldn’t carry out my daily chores without assistance for the next three months and I was almost certain my career would end,” recalls Taranjeet.

On Tuesday, almost three years later at the same venue, the 19-year-old won the 100m title with 11.54s on the clock at the ongoing U-23 Nationals. Daneshwari of Karnataka (11.66s) and Nithya Gandhe (11.90s) took the next two spots. Taranjeet returned later in the evening to top her heats in the 200m.

Taranjeet’s sensational post-accident comeback is due in no small part to India’s greatest wrestler Sushil Kumar.

When Taranjeet returned to the tracks after six months of rehabilitation, she realised that every month away from the tracks took her years back in terms of performance.

“Girls who I used to beat with ease earlier were miles ahead of me. It took me 40 seconds to complete 200m (Taranjeet’s best is 23s). I would sit and weep after practice. I had lost all hope again,” she recalls.

Just when she was about to hang up her spikes, Taranjeet received a pep talk from Sushil at North Delhi’s Chhatrasal Stadium.

“I was crying and Sushil sir saw me. He asked me why I was weeping? I told him about my accident and how I am not able to regain my form. I asked if he couldn’t see the support bandages I was wearing. He said no. He said he couldn’t see it,” says Taranjeet.

“He told me that if I believed that the badges weren’t there then it wouldn’t affect me. He consoled me and encouraged me to fight harder,” says Taranjeet.
Sushil asked the youngster to wipe her tears and stand up. “He said ‘let me welcome you to a new start’ and clapped for me.”

The few minutes of interaction with Sushil changed Taranjeet’s life forever. “This is a second life for me. If Sushil sir hadn’t spoken to me that day I wouldn’t have been here today. I am certain of that.”

Taranjeet took up athletics as a 13-year-old with only one goal in mind: to cut down on her weight. She weighed 75kg when she decided to walk into the Chhatrasal Stadium to meet athletics coach Sunita Rai.

“On the first day, I cried after running just one round. I couldn’t. But Sunita ma’am encouraged me and motivated me. Initially, she tied a rope around another athlete’s hip and mine. I was literally dragged into running,” says Taranjeet.

Coach Sunita says she saw a spark in the teenager and took her under her wing, despite Taranjeet being “unfit for athletics”.

“I knew there was something special about this girl. The first thing I noticed was that she was very strong. I had a feeling she would do something on the circuit and that is why I decided to coach her despite her weight troubles,” says Sunita.

Taranjeet’s gold-winning run of 11.50s run at the recently concluded Open Nationals in Warangal was her personal best.

The Delhi runner won the 100 and 200 double at U-20 Federation Cup earlier this year as well. She was naturally delighted on winning back-to-back national golds but the discomfort in the shoulder area still hampers her performance. “When the workload increases, it hurts,” she says.

But with renewed vigour and steel-like resilience, Taranjeet feels nothing can stop her from breaking idol Dutee Chand’s 100m mark of 11.17s.

“I met her once and told her that I would like to be like her. She told me ‘don’t aspire to be like me but become better than me. Become a Taranjeet,” she says.

DNH bypoll on Oct 30; Wife or son of Mohan Delkar likely to contest