Once refusing to wake up to train, Amit Khatri racewalks his way to India’s first ever U20 World medal in the event. Vacations for Border Security Force (BSF) constable Suresh Khatri meant a trip to the peace of his home in Ismaila village, in the Rohtak district of Haryana. Soon those relaxed mornings would be broken by the commotion of Suresh forcing his young son to exercise with him.

Though on holiday, Suresh would diligently follow a strict exercise routine to keep fit, while he watched his son, Amit, laze around at home.

“I follow the camp’s routine when I am home, so I used to wake (Amit) up early for our morning runs,” he says. “I took him for runs because I wanted him to lead an active lifestyle and then eventually get a job in the armed forces.

“Now he’s excelled beyond anything I’d ever expected.”

On Saturday, Suresh – again at home after taking special permission – watched his 18-year-old son clock 42:17.94 minutes to win silver in the 10km racewalk event at the U20 World Athletics Championships in Nairobi. He trailed the eventual winner, Kenya’s Heristone Wanyonyi by just over seven seconds.

But earning a spot on the podium in racewalk at a world event was a barrier no Indian had breached before. And each of those measured 10,000 steps at the Moi International Sports Centre was watched by his family glued to the computer screen, none dared moving from the spots assigned to them.

Meanwhile in Pune, naik subedar Chandan Singh too watched the race with keen interest. He’s been training Amit since 2018. Chandan’s contribution to Amit’s sporting career has been so immense that Suresh asserts “Chandan ji knows everything about Amit.”

While Suresh once foresaw a future in the army for his young son, Chandan envisioned Amit would fulfil a dream Chandan could not achieve. For the coach, still an active racewalker, who has taken part in two senior World Championships, Amit’s medal is a shot of inspiration to train harder for his own athletic endeavours.

It’s celebration mode at Amit Kumar’s home in Rohtak. The teenager won the 10km racewalk World Championship silver In Nairobi, a while ago. #U20WorldAthleticsChampionships @IExpressSports pic.twitter.com/vKvbsbU5B0

“I haven’t won an international medal yet, but this feels better (than if I had won),” says Chandan, who is training at the Army Sports Institute in Pune for the Commonwealth Games and Asian Games next year.

“I not only feel extremely happy but I am inspired by a student. If this young boy can do it, so can I.”

If Amit’s journey of 10,000 steps started when his father yanked him out of bed to exercise in the morning, Chandan has helped the youngster complete the goal.

The Khatri household also welcomed Gajendra Negi, Amit’s training partner, to their home to watch the race on Saturday. He explains the impact the coach has had on their budding careers.

“I asked him if I could train with him,” Negi recalls of his first interaction with Chandan, which happened to be through social media.

“He reluctantly agreed. He’s very focused and lives in his own world where there’s nothing but sports.”

But Chandan found it in him to guide Negi and Amit under his tutelage. The pandemic stalled their interactions, yet they continued to receive training instructions through WhatsApp. 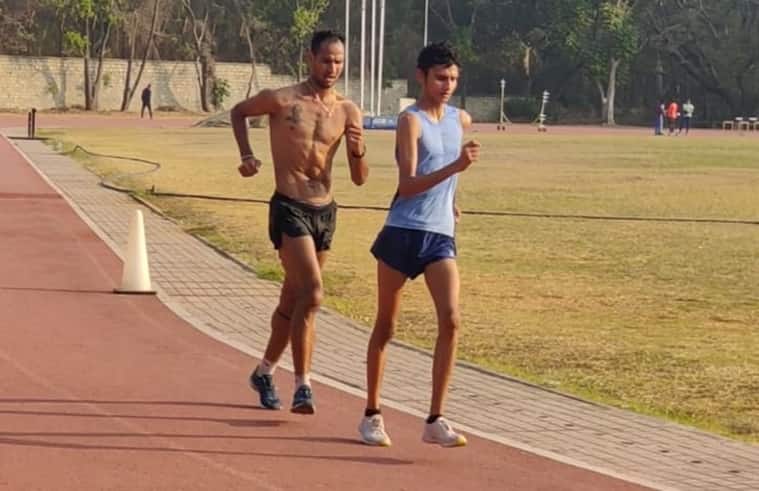 Amit Khatri and coach Chandan Singh (left), who is an active athlete, during a training session.

The coach even invited them to his home in Mukteshwar, in the Nainital district of Uttarakhand. Sitting at an altitude of nearly 2200 meters, in the Kumaon Hills, the adventure sports hub became Amit and Negi’s very own high-altitude training centre.

This was despite Chandan being based over 1600 km away in Pune.

“He takes care of everything. We have all our meals with his family. We are just blessed to have a coach like him,” Negi says.

“We send him our videos and then he suggests corrections. He also sends us a daily training plan.”

What started through reluctance of taking students under his charge while searching for his own athletic avenues, Chandan now looks out for them.

“I train these students because of my passion for sports. I have competed in 16-17 international meets and have learnt a lot from my mistakes. I don’t want these kids to repeat the errors I made,” he says, also asserting his hope that the duo will inspire more to take up the “little known discipline.”

Medal Moment of #India at #WorldAthleticsU20

He feels a tad uncomfortable talking about his own role in their development and quickly changes the topic to Amit’s timings and competition. Moments after the call he sends a few pictures of the youngster during his training sessions. One sees Amit walking through a path carved out by vehicle tyre tracks on the snow-filled roads of Mukteshwar – memories of the few steps taken to get to silver in Nairobi.

In its Wikipedia page, it is described that most of Ismaila’s residents have the surname ‘Khatri.’ On Saturday Amit Khatri laid down a clear distinction.