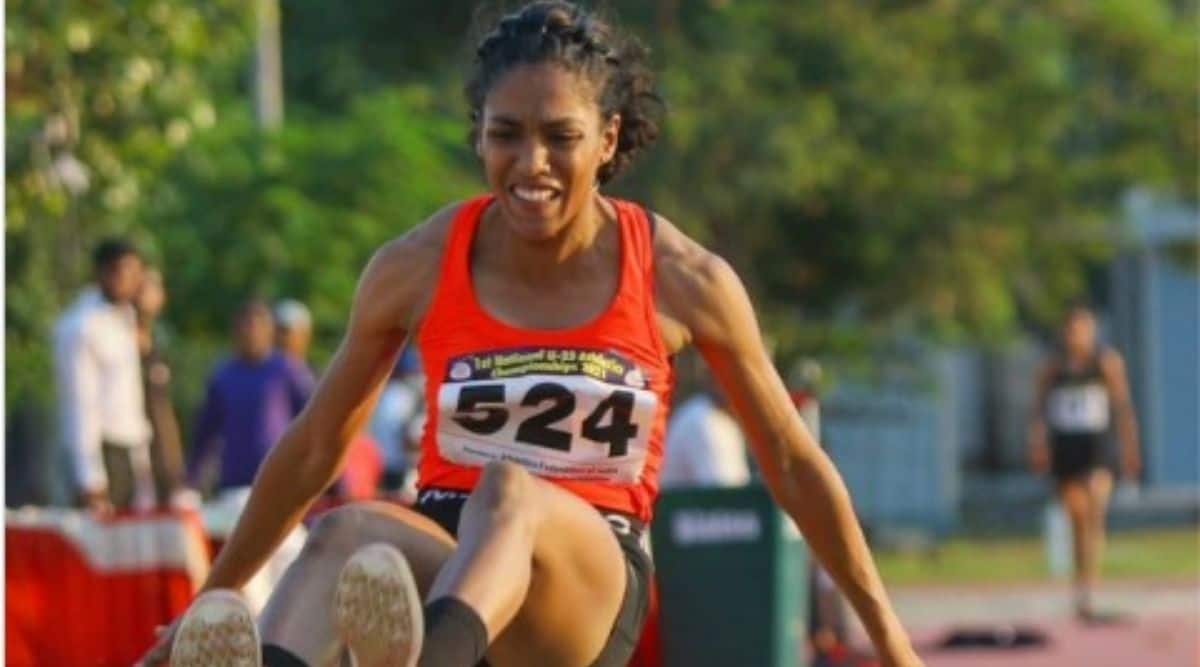 The Chennai jumper bagged gold at the Under 23 National Championship in Delhi on Tuesday with an impressive leap of 6.45m to finish ahead of Sandra Babu (6.29m) and Pooja Saini (6.22m) (Photo: Andrew Amsan)

When 20-year-old Sherin Abdul Gaffoor took up long jump she didn’t harbour dreams of making it big in the sport. She hoped medals would better her chances of getting admission in a medical college through the sports quota. But Sherin didn’t know at that time her tryst with athletics would change the course of her future, including plans to become a doctor.

The Chennai jumper bagged gold at the Under 23 National Championship in Delhi on Tuesday with an impressive leap of 6.45m to finish ahead of Sandra Babu (6.29m) and Pooja Saini (6.22m).

Sherin got so involved in the sport that she felt taking up a demanding course like MBBS could hamper her athletics career. She convinced her parents to allow her to switch to engineering instead.

Chennai jumper Sherin Abdul Gaffoor bagged gold at the Under 23 National Championship in Delhi on Tuesday with an impressive leap of 6.45m pic.twitter.com/DiWK3cQa7O

“When I told my parents they were really unhappy. After lots of arguments they were finally okay with ‘at least’ an engineering degree,” Sherin says.

But just one week into her engineering course, Sherin realised that she would have to make another course correction.

The packed college schedule hampered her training routine. Sherin’s priorities were clear. The bright student decided to quit just one week into her course to take up sociology at M.O.P Vaishnav College in Chennai.

But her parents initially said ‘nothing doing’.

“My parents wouldn’t let me settle for an arts course. I had to literally beg. I am not kidding, my father is right there and you can ask (Father nods). I said please allow me to quit engineering and focus on my sport. It took a while but they realised how desperately I wanted this and finally agreed but reluctantly,” Sherin says.

Sherin’s parents have always had high expectations from her over-achieving daughter. Before finding her true love in athletics, at her parents’ insistence, she tried her hands at the piano, drums, violin, guitar and even Bharatnatyam.

“Long jump is an emotion,” Sherin puts it poetically. “When you stand at the start of the runway it’s like a mental battle between you and the pit. During the jump I go into a different zone, I forget about everything around me for a while. The feeling is surreal,” Sherin says.

Long jump, which started off as a means to improve her higher education prospects, has turned into a passion. “I am not a great jumper right now. I have a lot of areas to improve on. The biggest hindrance at the moment is not having a full-time coach to guide me. It makes a lot of difference,” she says.

Sherin used to train at an academy run by coach P Nagarajan, who is now arrested following sexual harassment allegations by some of his trainees.

Friends off the field

Sherin has been taking guidance from her seniors at the JLN Stadium in Chennai. For the Delhi meet she travelled with her friends and fellow trainees Nandhini and Aishwarya, who bagged the 100m hurdles silver and triple jump bronze respectively.

During Sherin’s final, Nandhini and Aishwarya were sending jump-by-jump clips to their seniors in Chennai and relayed the feedback to their friend.

“Our seniors from Chennai told us what changes to make and then we explained it to Sherin, that helped her a lot,” says Nandhini. On Wednesday, during Aishwarya’s triple jump finals, Sherin took over the camera.

“We are really close and have each others’ back all the time. We not only train together but also go to the same college,” says Nandhini.

Sherin, who is also a talented dancer, was really pleased to see coach Bobby George with his wards at the meet. But the youngster says she hasn’t been able to muster the courage to go up and have a chat with Bobby who had coached Anju to the 2003 World Championships bronze medal.

“He’s such a big coach, I feel very nervous to approach him. He has been on the circuit for so long and there is nothing that he doesn’t know about jumps. I was just about to say hello to him but he got busy with something,” Sherin says.

When Sherin was told Bobby had something to say about her, she was keen to know what he had said. “She’s very consistent,” Bobby had said. That was enough to bring a bright smile to Sherin’s face.