“We have unanimously taken the decision to identify Jog Maharaj Vyayamshala as the main training centre to train women for the Olympic Games of 2020 and 2024." 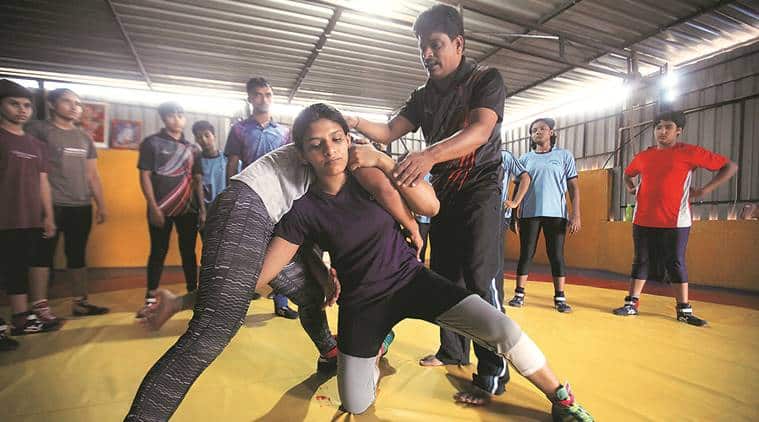 A training session at Jog Maharaj Vyayamshala for girls in Alandi; (below) the hostel for the wrestlers. Arul Horizon

Situated in a small bylane of Ghundare Patil Nagar in Alandi, the Jog Maharaj Vyayamshala, a residential wrestling centre exclusively for girls, has been identified by the Maharashtra State Wrestling Association (MSWA) as the main centre in the state to train women wrestlers for “Mission Olympic 2020 and 2024.” The resolution was passed recently by its executive committee meeting held at Jawaharlal Nehru Stadium in the city.

Balasaheb Landge, secretary of MSWA, said, “We have unanimously taken the decision to identify Jog Maharaj Vyayamshala as the main training centre to train women for the Olympic Games of 2020 and 2024. In November, a specially-appointed selection committee will select women wrestlers for sub-junior and junior categories. In the first phase, in all 36 women would be selected and trained. The selected wrestlers from this group will represent the state in the national championships.”

Landge said that at the centre, the selected wrestlers will be provided free training along with accommodation and food. While the training will be taken care of by the Vyayamshala, MSWA will support the centre, he said.

Dinesh Gund, founder and coach of Jog Maharaj Vyayamshala, said he was proud that his centre has got the recognition from MSWA. “It also means a great responsibility,” he said, adding that the selection rounds will take place on November 10 wherein over 150 wrestlers from all across Maharashtra will show their wrestling skills. “In each weight group category, two girls will be selected. In all, 36 girls will be shortlisted. Though I will arrange training and accommodation, I am in the process of looking for sponsors for their food. In case I won’t be able to find any, I will manage on my own. I am determined that I will train the best players for the upcoming Olympics so that they can win a medal for our country the way Sakshi Malik won at Rio Olympics this year,” said Gund, who founded the Vyayamshala in 2007.

The Jog Maharaj Vyayamshala is the only residential “akhara” (wrestling centre) for women in the entire state.

The centre is part of the two-storey house where the Gund family resides with their two children, who also pursue wrestling. While the Gunds stay on the ground floor, the upper floor houses the residential area for the girls training at the centre as well as the wrestling area where they learn wrestling.

Though Gund started the “akhara” with just three girls in 2007, now it has 42 girls who from various parts of Maharashtra like Beed, Amravati, Ahmednagar, Nagpur and Kolhapur. While the accommodation and training is free-of-cost for the trainees, they bear the mess charges. The girls study in various schools and colleges located in and around Alandi. They follow a rigorous training schedule which includes six hours of training and exercises in a day – three hours each in the morning and evening.

“We need at least three-four professional coaches to coach 36 girls. I have asked MSWA to appoint the coaches as soon as possible,” said Gund.

After wait for months, Maharashtra akhara gets its pending stipend