Abhishek Verma not only won his first gold at the ISSF Shooting World Cup in Beijing, China but also secured the fifth Olympic quota for the country by finishing top in the men's 10m air pistol event. 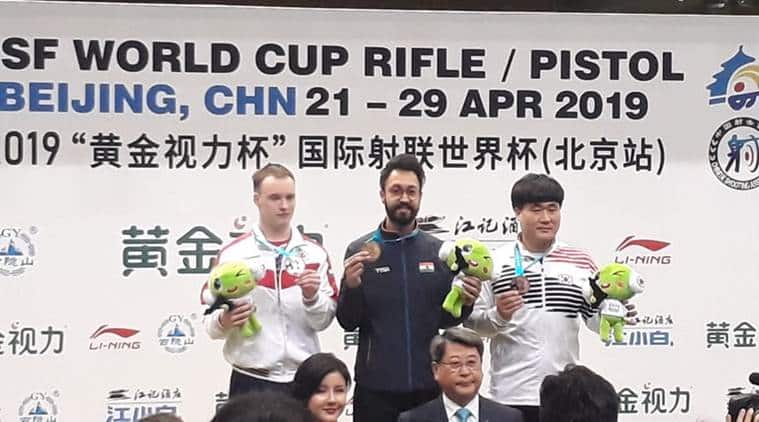 Abhishek Verma at the podium with his gold medal. (Source: NRAI Twitter)

Indian shooter Abhishek Verma not only won his first gold at the ISSF Shooting World Cup in Beijing, China but also secured the fifth Olympic quota for the country by finishing top in the men’s 10m air pistol event.

Shooting in his maiden ISSF World Cup final, the lawyer-turned-shooter led the field throughout to clinch the top spot with a total score of 242.7.

Abhishek led from the beginning to the end of the final, finishing with score 242.7 and giving India their second Tokyo Olympic quota place in 10m air pistol men event.

India have sealed five quota places for the Tokyo Olympics so far with Saurabh Chaudhary clinching one in 10m air pistol event at the ISSF World Cup in New Delhi earlier this year.

Olympic quota for India ⁦@OfficialNRAI⁩ ⁦@Media_SAI⁩ along with a brilliant gold medal by Abhishek Verma in men’s 10m Air Pistol #BeijingWorldCup. Can’t believe this is just his 2nd World Cup. He was so cool & composed. Proud to support you Abhishek ⁦@OGQ_India⁩ pic.twitter.com/8aOR1bM5qB

What composure from this young lad. #AbhishekVerma strikes Gold at @ISSF_Shooting World Cup Beijing in 10m Air Pistol Men. With this 🇮🇳 will field 2 athletes in the event in @Tokyo2020 . @IndiaSports @Media_SAI @OfficialNRAI #IndiaShooting

Russia’s Artem Chernousov took silver with a total of 240.4 points in the eight-man final. Korea’s Seungwoo Han finished with a bronze after shooting 220.0 in the final.

In Beijing on Saturday, Verma shot a total of 585 points to qualify for the final at the fourth spot. He was the only Indian who progressed to the final with Shahzar Rizvi and Arjun Singh Cheema finishing 32nd and 54th respectively.

Competing in his fourth big final in less than nine months and a third international medal in his very first year, Verma was right on the money from the word go, evident from a score of 97 in his first qualifying series. He shot a 100 in the fourth and finished with 98 and 97 for a qualification round score of 585, his best in a short international career. The total placed him in a comfortable fourth place in the 97-strong field. Park Daehun of Korea topped the field with a 586.

Unfazed by the presence of former Olympic champion Pang Wei of China, world championship silver medallist and world number two Chernusov as well as experienced campaigners and multiple ISSF medallists like Oleh Omelchuk of Ukraine and Yusuf Dikec of Turkey among others, Verma shot beautifully.

In the day’s other events, Manu Bhaker was the best-placed Indian shooter after the precision stage of the women’s 25m pistol qualifications round. She shot 291 to be four points behind the leader in 14th spot while Asian Games champion Rahi Sarnobat’s effort of 288 put her in 29th place. Chinki Yadav shot 284 to lie in 57th spot.

All three Indians in the women’s 50m rifle 3 positions (3P) event also comfortably sailed through their elimination round and will shoot the qualifying round on Sunday, which is also the concluding day of competitions.