The 23-year-old, who clocked 20.75 seconds had to give up on his first love, football, before taking up athletics seriously. 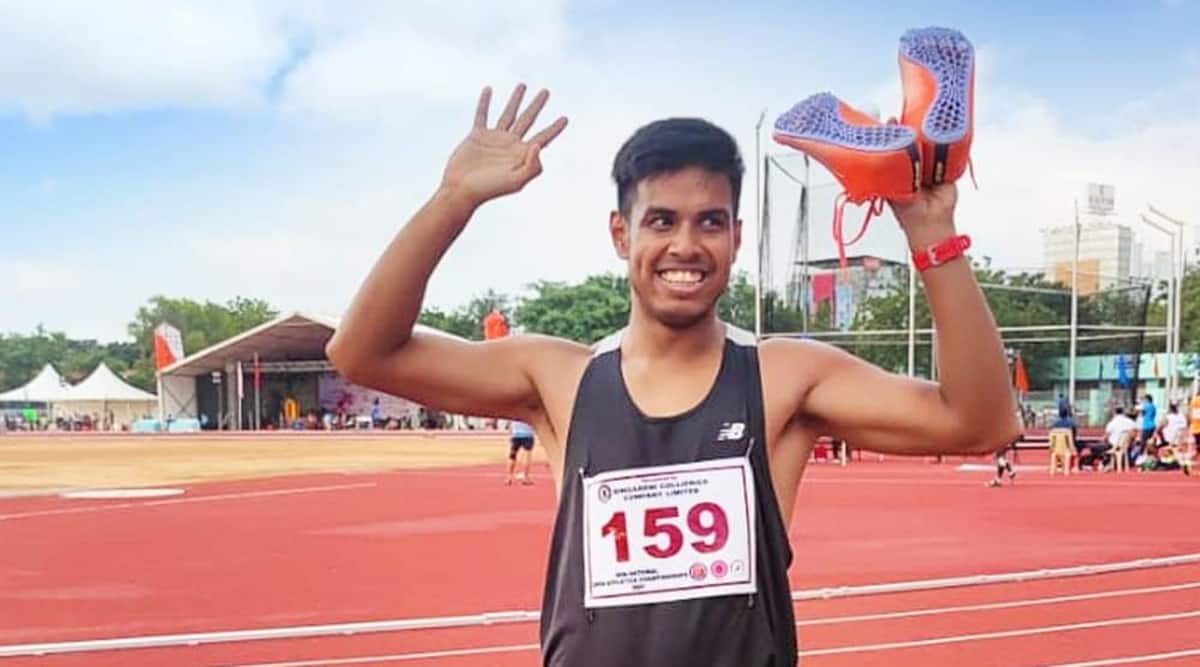 Assam sprinter Amlan Borgohain won the 200m title with the second-best timing on Indian soil at the Open Nationals, Warangal on Sunday but it has come at a price. The 23-year-old, who clocked 20.75 seconds, to finish comfortably ahead of Balakumar Nitin (21.06) and Nalabothu Shamugha (21.12), had to give up on his first love, football, before taking up athletics seriously.

“I was getting injured very often while playing football and my mum did not like it. You know how moms are, right?” says Amlan whose 20.75s is also the fifth-best all-time run by an Indian. Troubled by the sight of her son’s frequently bandaged ankles, she decided it was time to put her foot down.

“My mom asked me to either switch to a different sport or quit entirely. Playing football wasn’t an option anymore. It was a tough decision to make,” recalls the Cristiano Ronaldo and Sunil Chhetri “superfan”. A contactless sport like running was an easy choice to make, and after his first school meet he realised, this new discipline matched the adrenaline kick football gave him.

Just when Amlan was looking for a mentor to help him progress to the next level, he was spotted by James Hillier, the head coach at Reliance Foundation Odisha Athletics High-Performance Centre at Bhubaneswar during a competition in July 2019.

The first thing Hillier noticed: “He was a little chubby.”. But the seasoned Welsh coach, who has mentored the likes of Rio Olympics 400m relay bronze medallist Emily Diamond, saw something special in him. “It is sometimes hard to describe. I just knew there was something special about him. I have been doing this for a long time. His timings were not great but I knew he had potential. I decided to take the gamble,” says coach Hillier.

After further assessment, Hyderabad-based Amlan was inducted into the training centre at Bhubaneswar in early 2020. Amlan, who arrived at the centre with a personal best of 21.89s, has immensely impressed his Welsh coach but Hillier feels there is still a lot of room for improvement.

“He arrived with a 13 per cent body fat and now it’s seven (the same as his idol Ronaldo’s). His muscle mass has also increased. There are no specific areas but I would say we will work on every aspect. I will not give you a number as to how much he can improve because that is like limiting his potential,” says the 43-year-old coach.

During his free time, Amlan likes to knock around the football in his room since playing his favourite sport on the ground is still off-limits due to fear of getting injured. “You can say football is banned for me right now. I but I watch a lot of football,” says Amlan, who also spends a lot of time reading motivational books and watching TED Talks.

“I like to know about people’s struggles and how they come up from them. It inspires me a lot,” says the chirpy youngster, who approves of Cristiano Ronaldo’s return to Old Trafford. “I still have that old Ronaldo United jersey,” adds Amlan, who also bagged the 100m silver on Saturday.

But there’s another jersey that Amlan would absolutely love to add to his collection. “When Sunil Chhetri came to Hyderabad for a match I got to meet him as a fan. I did not get to sit down and talk with him. If that happens that would be like a dream come true. I know everything about him, his story, his struggle. I won’t ask him any questions but just say one thing to him, ‘I’m a big fan’”.

Amlan may not have any questions to ask but rest assured a request for a signed jersey would be on the cards if and when he meets the India football skipper.