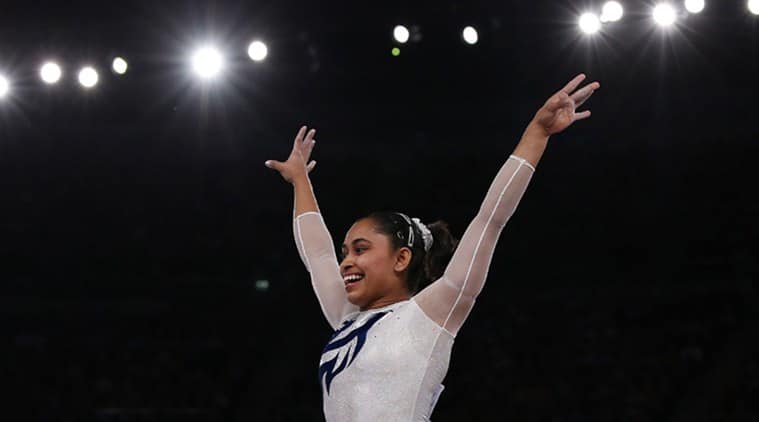 Dulal Karmakar spent a few sleepless nights having taken — what he thought — was a deeply uncomfortable decision: that he would keep his younger daughter Dipa in a Bengali medium school.

His eldest, Puja, four years older, studied at an English medium in their Agartala neighbourhood. He would ask the 7-year-old many times over, if she was alright going to the school she was enrolled into, and not learning English like ‘didi.’ But the girl was stubborn. She used the only English she’d managed to learn, to tell her father — ‘English means no gymnastics practice.’

Having started out on gymnastics just a year ago, the Class 3 girl had concluded that the only way she could devote all her time to the sport she was beginning to like, was by sticking to the Bangla school, which had very few hangups about attendance and which allowed her to spend maximum time at the gymnastics hall where she was quickly learning the basics.

“As parents, we were not sure if we were doing the right thing by keeping her away from English, but she was adamant,” Dulal remembers. Dipa insisted on staying put, and that according to her father was the biggest sacrifice his daughter made in pursuit of Artistic Gymnastics.

English, in the end, would matter very little, as two names — Aleksandr Nikolaevich Dityatin and Yelena Produnova — and other such Russian tongue twisters that enthralled the gymnastics world would get added to her vocabulary oftener than the more common language of upward mobility in the small capital.

“She eventually did her graduation and is pursuing her Masters in Political Science, so that early disadvantage didn’t matter. But the time she got off from needing to attend school all went into gymnastics,” the chuckling father recalls. Fifteen years down the line, the gymnast Dipa Karmakar has become the first Indian woman to qualify for the Olympics.

At Rio, India will be distracted from its usual bunch of 6-7 disciplines where it routinely sends athletes and check the progress of a girl gymnast, 62 years after the sport held the country’s cursory interest at Rome.

Even leaving aside the history of the achievement (first Indian, etc) or the math of gymnastics’ decimal scores (she took the 15th spot out of 34 available at the test event, meaning she was in the top half of the competitors), this is mammoth for the girl who dreamt big in little Tripura and has reached the doorstep of Olympics from where she plans to go bounding off the vaulting table and leap to success.

Indians are still in disbelief about her medal-winning potential, though the girl always knew she was gearing up for something big. “At age 9, on her birthday, she declared she wouldn’t cut the cake till she’d finished her evening practice at the gymnastics hall,” recalls sister Puja. “She was far more mature even back then and focussed about gymnastics. She told father that since I didn’t have sport to do, I could devote time to English. She wanted none of the hassles of school and classes, so she was happy with Bangla,” Puja (25) says.

Dipa was a reluctant gymnast the first few years — not entirely happy about the repetitive drills, but she never really quit on the sport and till date refuses to take more than a day off from practice.

“If she decided she wanted something, she would just not rest easy till she got it, first National championship, then the India team, then the Commonwealth games, now Olympics qualification. I learnt very early not to take what she declares lightly. She won’t say something unless she’s sure in her mind she can achieve it,” her father, a weightlifting SAI coach, says.

“Half the target’s achieved — she’s just qualified, she will aim for the Olympic medal,” he says, even if it sounds outrageous for an Indian to aim so high. “She was in top 6 at World Championships apparatus finals (Vault). I don’t think she’ll travel to Rio in August as just another participant,” he reiterates.

Moments after she qualified, she sent home a text message: “Hum qualify ho gaya.” No wild celebrations, no preening, no exaggerated sound bytes. It had been a nervous wait to get invited for the test event: she was 26th after World Championships, second reserve. When North Korea withdrew, Dipa was back in contention. From not making it to the test event, she went on to being one of the top individual competitors at the test event — a huge improvement from the Worlds, with no falls or major mistakes.

While in India between October’s Worlds and April, Dipa would be caught in a tussle between two rival gymnastics federation factions wanting to invite her for their own nationals.

In India’s grandest hour in gymnastics, the country doesn’t have a unified functioning federation. No matter.

“She approached SAI, told them her focus was the test event, and was told to prepare only for that and skip both nationals at Gurgaon and Kerala. She’d be anxious but continue training, sharpening her Floor, Beam and Uneven bars for 6 hours a day, and listened to coach,” Dulal says.

The only time he’d seen her this upset and anxious was soon after the 2010 Delhi Commonwealth Games where she had failed to win a medal and cried for days on end — a failure that spurred her on to aim much higher.

“That missed medal really pushed her. She wanted to do something bigger,” sister Puja recalls. A medal at the 2014 edition was just the start of redemption — the Olympics dangled on her horizon. Her father’s advice was simple: “As a coach I know that wards need to trust their mentors. I told her to trust her’s unquestioningly. If you don’t agree talk it out. She would argue, scream, get angry, but eventually always arrive at a consensus.” Puja remembers very little of Dipa as a baby-sister. “Yes she loved eating Ilish and never listened to anyone if Chak De! was being aired on TV, always watching it till the end even late into the night. But otherwise she is the bossy one in the family, and very clear about her ambition,” she says.

“The world maybe wondering where this motivation suddenly came from. We always knew. Just watch her on the Vault,” she says.

In a tiny corner of Tripura, an Olympic medal doesn’t seem that far-fetched.