Democratisation of fencing in India

Traditionally a preserve of the elite, fencing is plucking talent from rural belts and fuelling their Olympic ambitions.

A young fencer trains at the Sports Authority of India’s Thalassery centre.

Baby Reddy clucks often during the phone conversation, correcting the details. “No. My father is not a farmer. We have a small house, three buffaloes and grow plants in two pots,” the 17-year-old specifies, slowly.

The fencer, who was at the National Centre of Excellence in Patiala, has been busy correcting a Nationals-score mention against Olympics-bound Bhavani Devi from last month in Rudrapur, Uttarakhand. “It was 4-15. Not 14-15. Anyway she won,” the 17-year-old stresses.

It was an error—the press printed it as 14-15 after Bhavani picked the title, when it was 4-15, but it has fired up Baby’s ambition. “But you must write about the first time I played her. I got 3 points, she got 5. I fought fearlessly. Now there’s fear because she’s Olympics level. Still, I gave her a very good fight,” she says, adding earnestly that the press should call her next when she beats her idol.

A sport that was the preserve of the aristocracy in Europe and posh clubs across the first world, is unearthing talent from India’s remote rural areas.

Three of the five fencers who will travel to Tashkent, Uzbekistan, for the last Olympic qualifying tournament this week, are children of farmers. The group includes sabre’s big hope in men, Karan Singh, whose father tills a tiny patch of land on contract in Alwar, Rajasthan. Th Kabita Devi, looking to pounce on the sole qualifying spot in Epee from the continental meet, has a parent in Silchar police.

Bicky Thokchom of Bashikhong in Imphal, Manipur, is also the son of a farmer. While Radhika Avati, who also fences foil, comes from a farming family in Sangli. Epee fencer Sunil Kumar’s father is an ex-serviceman now farming in Jhunjhunu, and it is India’s silent scouting efforts staking out far-flung areas from 2008-9 that have handpicked these potential winners.

Blades that were once held by princes only for their leisure are now picking targets while wielded by children of peasants and beat police. Bhavani has lit a competitive drive across coaching centres of India. Her own background, she came from a middle class home herself, has meant ambitions are upgraded across the nation to aim at the Olympics, undeterred by the prohibitive costs of the equipment. 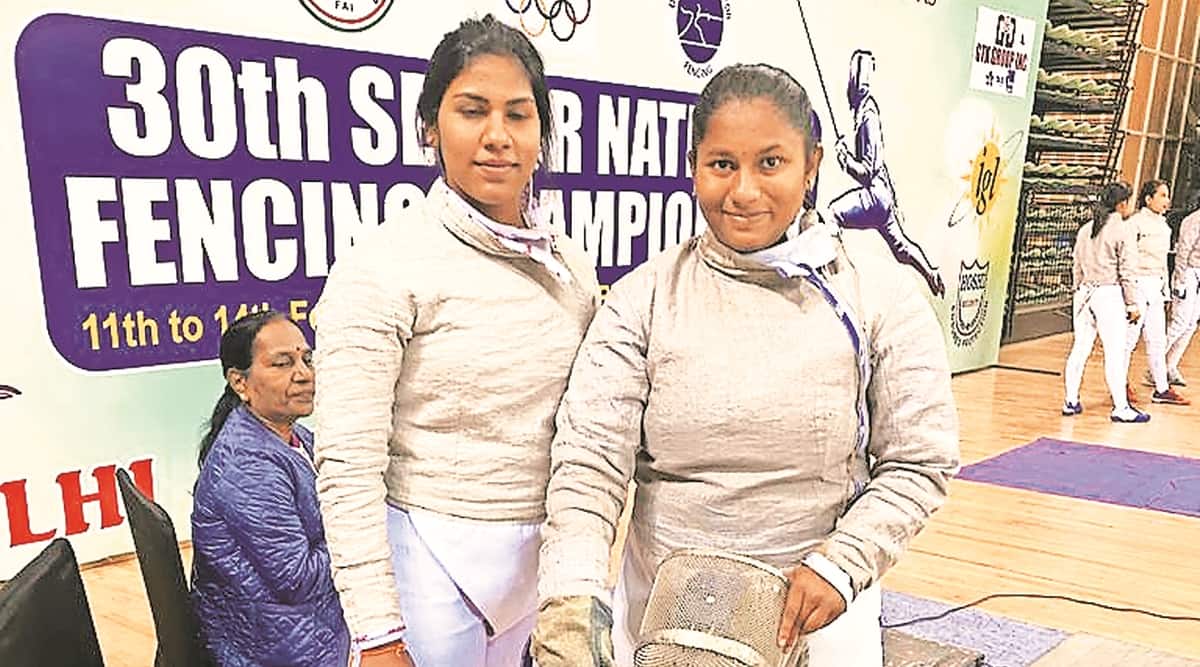 While Baby belongs to Kadapa in Andhra, she was scouted by coach Bhavani Prasad Dhungana for her speed and combative confidence in a football match. “She was chubby in Class 3 too. But she was so fast while running and in football and the first time she held the weapon, there was no fear. Good aggressive attacking and footwork and confident in lunges. So we brought her from Kadapa to Hakimpet centre,” says the coach.

Sports Authority of Telangana would fund her education and training at a sports school as she started picking medals nationally. And now the teenager is biding her time to be assigned her personal gear at Patiala, while dreaming of her next shy at the iconic Bhavani, set to be India’s first fencing Olympian.

As many as 200 fencers are training in the wings at Munnar, Wayanad and Ernakulam in Kerala, besides the two centres at Coonoor in Tamil Nadu.

Sagar Lagu, who started out in Sangli when his local gymnasium owner Rekha Nene went in for a diploma at NIS to coach her daughter in the sport, has pushed the Kerala surge. A topper at NIS himself— “I’m an accidental coach,” he says – Lagu was posted to Kerala. “In 2008 I sent 20 odd coaches to get their coaching certification from Kerala. Then we looked for raw talent from other sports,” says Lagu, who was instrumental in getting Bhavani to Coonoor from Chennai.

A junior Commonwealth and Asian medallist himself, he remembers India’s early days in the sport internationally. It resembled relay-fencing.

Comical outings in the past

“Only one mask and blade would be shared by all. So the board-call announcements would happen somewhere and our fencer would be at another piste waiting for that match to get over and grab his mask and sword. They’d run to where they were to compete wearing the mask on the way and then the next fencer would pick up the equipment and run. It was comical for anyone watching and so many were carded out because a teammate’s match hadn’t finished and the mask wasn’t available,” he recalls.

In the last few years, fencing has been elevated to a priority sport.

And there are grand plans of Excellence centres across the country with foreign coaches to be roped in. The pandemic has put a sorrowful pause on the sport at developmental level. But even before Bhavani’s qualification—a tactical collecting of points was secured—parts of India were buzzing with startup promise.

Like Kerala, state centres have been excellent feeders with diligent low key SAI coaches toiling away in Bhopal, Telangana, Aurangabad to go with the two traditional powerhouses Manipur and Punjab.

A haul of 36 medals at Olympics is the incentive, but some centres throw up natural talent in hordes. Like the Jammu Kashmir State Council centre which is brimming with numbers of talented fencers, nurtured technically by astute coaches.

“For the first 6-7 months, I don’t even give athletes a real blade. They have to be fundamentally strong and disciplined. Immaturity is not permitted in this sport. And whether it’s Aurangabad or J&K, all centres have coaches who drill in basics meticulously,” he says.

Karan Singh was picked for the Army Boys company sports school from Rajasthan along with Chunilal, son of another farmhand. Shiv Mangesh of Kanyakumari was scouted out and quickly got over the shyness he felt as the son of a labourer. Joshna Joseph, Bhavani’s strongest opponent, has a farmer father.

As does foil champion Radhika, who comes from the Thalassery centre. “Initial weapon is Rs 10,000 to 15,000 thousand. But training centres are taking care of that,” Lagu says.

Mumbai though is seeing a mushrooming of fencing clubs in middle class localities of Navi Mumbai and Thane.
“Those clubs also get kids from modest backgrounds. Fencing has no lack of driven athletes, now aiming higher because of Bhavani,” Lagu says.