Breaking the ice: Story of India’s ice hockey team is stuff movies are made of

A ragtag team, an American coach and a Twitter campaign to fund a dream. The story of India’s ice hockey team. 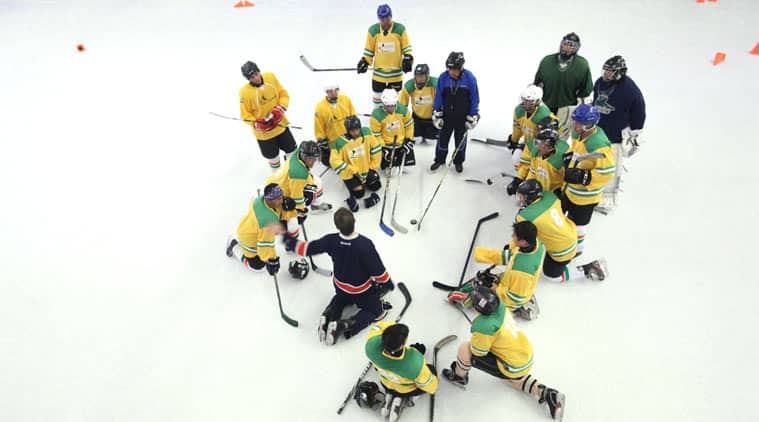 The current team has six members from the Indian Army; the rest are mostly college students from Ladakh. (Source: Express photo by Tashi Tobgyal)

A ragtag team, an American coach and a Twitter campaign to fund a dream. The story of India’s ice hockey team is the stuff movies could be made of.

Armed with a hockey stick, Amit Belwal, 23, fixes his sight on the goal. Seizing control of the rubber puck, he smacks it on the volley. As the puck speeds across the ice and heads towards the cage, goal tender Rigzin Dorjuy, 26, makes a dramatic dive to his right to save what looked like a definite goal just a few seconds ago. Belwal yells in despair; Dorjuy gets a pat on his back from his teammates.

Watching the action from the sidelines, Adam Sherlip, head coach, gestures at his forward. Disgruntled, Belwal moves aside and quickly does 10 push-ups — the price for missing a regulation goal. Belwal takes it in his stride; after all, he is the vice-captain of India’s little-known ice hockey team. Along with 21 men, most of whom are in their 20s, he has been training at a suburban mall in Gurgaon every morning for the past two weeks. The team is preparing for the 2015 IIHF Challenge Cup of Asia, starting in Kuwait from April 18. India is one of seven teams (Kuwait, Kyrgyzstan, Oman, Singapore, Malaysia and Qatar) competing in Division I of the championship. Winning the tournament will take them to Division II, where they could be up against some of Asia’s stronger teams like Korea and Japan.

“When you mention hockey in India, they think it is field hockey. When you say ‘ice hockey’, most people are not aware that it is played here,” says Sherlip. The 31-year-old American, a former ice hockey player from Long Island, New York, has previously coached the youth hockey team in China. In 2009, he shifted base to India. “Despite the lack of facilities, I was amazed by the passion I saw for ice hockey in Ladakh on my first visit, and I decided to stay back and help develop the sport in India,” he says. Sherlip was teaching the sport to youngsters there, when six years ago, Akshay Kumar, director, Ice Hockey Association of India (IHAI), approached him to train a national team.

India’s first foray into the Challenge Cup in 2009 under Sherlip was a disaster. The team went down 0-3 and were outscored 33-1 in three games. So far, the team has managed to register a solitary international win — against Macau — in 2012, in Dehradun. 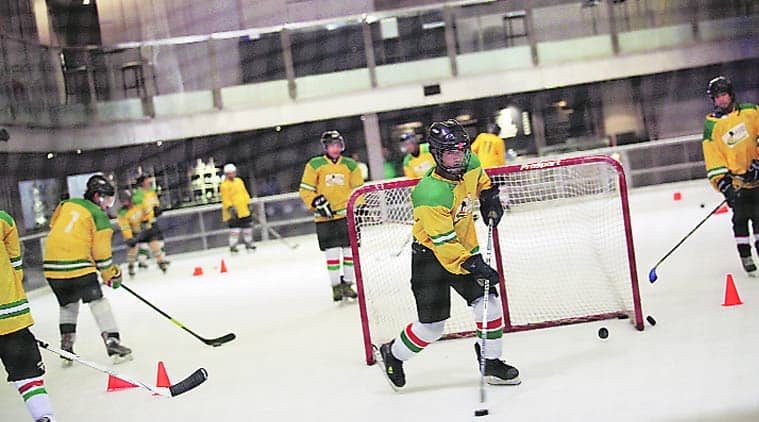 The current team has six members from the Indian Army, four of whom are from the Indo-Tibetan Border Police; the rest are mostly college students from Ladakh. “Ice hockey is the most popular game in Leh. The response from the public for such games is so tremendous that, at times, it would be difficult to even get a glimpse of the action,” says Belwal. The son of a school principal in Leh, Belwal developed a passion for the game by watching jawans play ice hockey.

Despite the encouragement from his parents, lack of proper equipment and the unavailability of a proper rink in Leh deterred Belwal from pursuing the sport. Only after a friend gifted him a pair of skates and a hockey stick, did he team up with friends to practise playing in the dead of winter.

After finishing school, news of the launch of India’s only international ice skating rink in Dehradun reached Belwal; he decided to move there. “I’d heard a lot about the rink which had hosted the SAF games in 2011. However, the rink was shut after the Asia Challenge Cup next year and the Uttarakhand government has been indifferent,” he says.

So why is a national team playing in a mall, when Ladakh is generally considered the home of ice hockey in India? “Winters there end by February, and you hardly find any frozen ponds in Leh. It is imperative that we get time for practice now, so we zeroed in on this rink,” says Kumar. Unsurprisingly, the ice skating rink in Gurgaon does not measure to international standards. The facility here is 30mX15 m — exactly half the size of an international ice skating rink. “It’s not an ideal scenario. But we aren’t complaining,” adds Kumar. 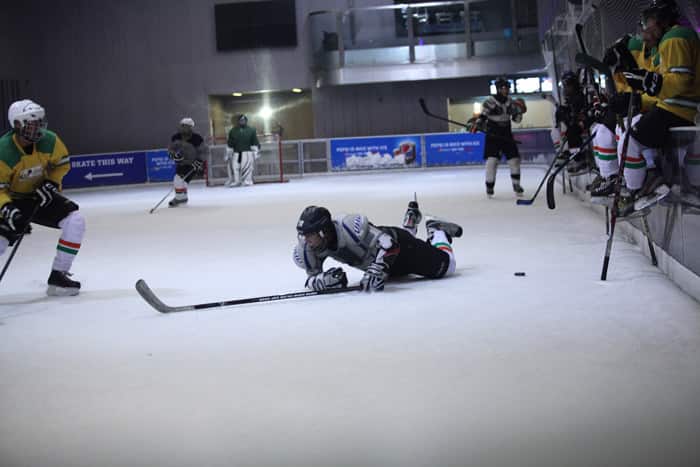 Ahead of the tournament, the players are concentrating on their game. Tsewang Gyaltson, 23, is the team captain and has played the sport since he was a teenager. He was selected for the Asia Challenge Cup in Thailand in 2012. “Being selected from 50 other players, most of whom were regulars with the Indian Army, was a boost for me. I worked harder and constantly looked to improve my game,” he says.

One of the older members, Amir Ali, 34, from the Indo-Tibetan Police Force, gives the team some much-needed experience. “I was barely 10 when I decided that I wanted to play ice hockey for India. The beauty of the game is that it is fast-paced, quick and requires tremendous physical and mental agility,” he says. A defender, Ali’s goal in the third half set the tone for the win against Macau.

In spite of being a national team, they are not paid by the Indian government for representing India in Kuwait. Most of their equipment has been gifted by friends or well-wishers. In a cricket-crazy nation, Indian ice hockey has been crippled by a general lack of funds. Earlier this month, India’s participation in Kuwait looked uncertain — Kumar’s pleas to the centre for financial support fell flat. IHAI had earmarked Rs 20 lakh for the campaign, which fell short just two weeks before the team’s departure. “We needed Rs 12 lakh immediately to take care of our travel and visa requirements, jerseys and equipment. So we launched a crowd funding campaign on Twitter using the hashtag #SupportIceHockey,” says Vedank Singh, digital marketing head, IHAI. #SupportIceHockey began to trend on the social media and the tale of the underdog Indian ice hockey team turned into a high-octane patriotic pitch. The news of the cash-strapped team grabbed prime time slots on the news. Soon, Anand Mahindra and several medium and small investors pitched in to help IHAI fund its campaign. Last week, Gautam Gambhir took time off from playing in the IPL to present Gyaltson with a cheque for Rs 4 lakh.

In addition, the logistics of getting players out of Ladakh has proven to be a nightmare for Sherlip and IHAI. “I’m going to Kuwait without two of my key players since they don’t have passports,” says Sherlip.

Singh is optimistic that the game has a future in India. “In 1983, the BCCI lacked funds to sponsor the Indian team’s travel to England. Back then, Lata Mangeshkar organised a concert in Mumbai, and the proceeds were handed over to the BCCI. Three decades later, we at IHAI are facing a similar predicament,” he says.

But Sherlip is hopeful about their chances at the tournament. “We’ve got a more settled side , and we’ve had enough time for practice,” he says. 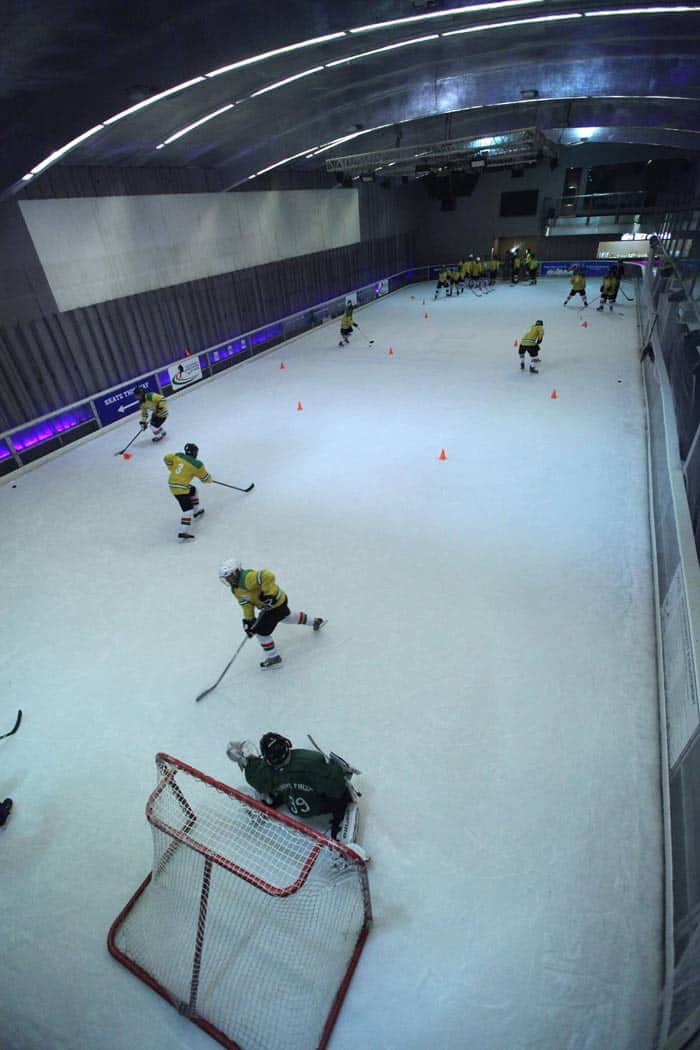 Ali credits his coach for chalking out an intensive training programme. “Last year we didn’t have time to practice much. Despite its size, the rink in Gurgaon will be similar to the one in Kuwait, so practicing here will help,” he says.

A coach from New York leading his ragtag Indian ice hockey team in the tournament of their lives does sound like an inspirational Hollywood sports movie. Sherlip is quick to quash such ideas. “That’s not how I look at it. I have a job at hand and the emphasis is on the execution of our skills,” he says.

Activists ask NGT to halt construction of Statue of Unity