Bihar girl Jyoti Kumari, who put studies over trial offer, to play herself on screen

Jyoti Kumari had cycled more than 1200 kilometres to reach home — from Gurugram to Bihar — amidst a nationwide lockdown, following which she had been invited for a trial by the cycling federation. 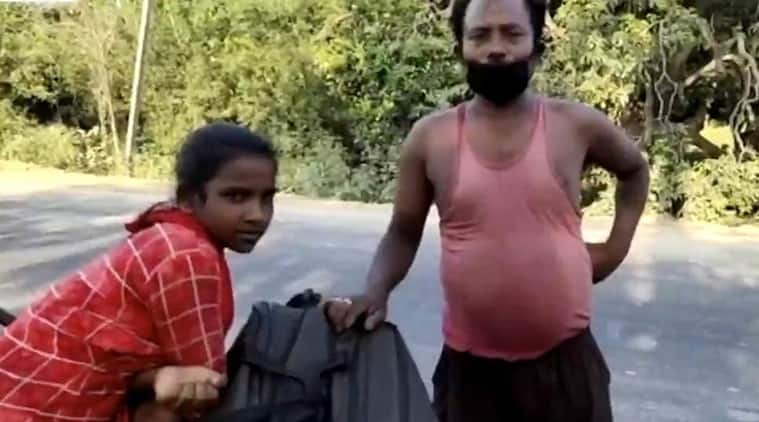 Jyoti Kumari had cycled 1200 km with her injured father sitting on the rear carrier of her cycle to reach home. (Screenshot/BBCNewsHindi)

Jyoti Kumari, who caught worldwide attention after she had been forced to cycle more than 1200 kilometres to reach home amidst a nationwide lockdown earlier this month, and then said she would prioritise her studies over the trial offer from Cycling Federation of India, will play herself in a film called ‘Atmanirbhar’.

“I wish to complete my studies first. I also feel physically weak now after such a long arduous journey,” the 15-year-old had told The Hindu earlier.

Speaking from her home in Bihar’s Sirhulli, where she reached after a seven-day journey — with her injured father sitting on the rear carrier of her bicycle — from Gurugram on May 16, Jyoti said, “Earlier, I could not continue my school education because of my family problems and I was occupied with domestic work… but now I wish to complete my matriculation first.”

In a recent development, the rights to her story has been bagged by a film production venture. The film is set to be shot from August. The role of the protagonist will be played by Jyoti herself, reported PTI.

READ | Jyoti Kumari to play herself in ‘Atmanirbhar’ movie

A second-hand cycle bought with the Rs 2,000 that was left in the house, and a bottle of water, was all that 15-year-old Jyoti Kumari Paswan had when she decided to take her ailing father from Sikandarpur in Haryana to Darbhanga in Bihar. https://t.co/oveu65OZoa

Talking about his daughter, father Mohan Paswan told PTI, “We will surely send her for the trials after the lockdown is lifted. She was enrolled in class nine yesterday. At the moment, we want her to complete her matriculation.

The District Magistrate of Darbhanga has enrolled Jyoti in class nine at the Pindaruch High School. She has also been given a brand new bicycle, school uniform, and shoes for her higher education.

Following the news of Jyoti’s feat, the Cycling Federation of India (CFI) had reached out to her, saying they wanted to give her a trial at the IGI Stadium complex in New Delhi and that they would bear all expenses for her to appear at a trial.

“She must be having the strength and physical endurance. We want to test it,” CFI chairman Onkar Singh had said.

The New York Times reported Jyoti’s story of being invited for a trial as that of a ‘lionhearted girl… inspiring a nation’. US President’s daughter Ivanka Trump had also tweeted the story as a heartwarming one.