With Shikhar Dhawan, it’s not just the lack of runs but the modes of dismissals as well that tell a perturbing tale of his travails. 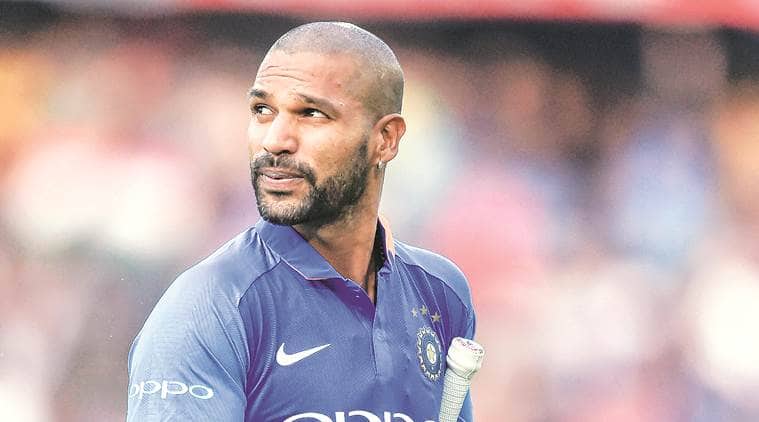 Opener Shikhar Dhawan has gone 17 games without a century. Express

‘A thinking cricketer’ isn’t how Shikhar Dhawan is often described. Those gloriously twirled moustache ends have long been snipped, but their lasting legacy – as too of his frequent thigh-slaps – makes the world misunderstand Dhawan. He does think, actually a lot. Back in the day, he would put those thoughts into words, too.

“It was recommended to me that I start writing down how I feel about my batting. So I began putting into words what I had felt while I was playing. Small stuff, like whether I was feeling active or sleepy. About how I have to focus despite being bored or sleepy or whatever it was that was causing my dismissal,” he once told this newspaper, giving credit to his wife, Ayesha, for coming up with the suggestion.

“All this writing caused me immense sadness – sad about some strokes that I played. Sad about the way I was thinking at that time. But this sadness brought clarity. It was then that I knew that I wanted to be a better cricketer and knew how to go about it. Writing helped me understand the game in a deeper way and enter it more consciously.”

If Dhawan is still similarly self-analytical, it means two things.

Firstly, the last five and a half months must have caused him considerable melancholy. Since his player-of-the-tournament performance at the 2018 Asia Cup in the United Arab Emirates, where he scored 342 runs in five hits with two centuries, it’s been all downhill for the 33-year-old from West Delhi. In the next 16 innings, he has made only 377 runs at an average of 25, with two half-centuries in New Zealand punctuating the worrying slump. In this time, he has also lost his spot in the Test team. To rub it in, on Thursday, he was downgraded to A from A+ in the BCCI central contract list.

His latest failure, one run against Australia in Ranchi on Friday, has triggered a debate over his place in the side. Some say, there needs to be a rethink on his exclusion from the 2019 World Cup squad. There is also the pragmatic view that he at least needs to make way for KL Rahul for Sunday’s 4th ODI here and even for the final game in Delhi next week.

With Dhawan, it’s not just the lack of runs but the modes of dismissals as well that tell a perturbing tale of his travails. Since the series against West Indies in October last year, Dhawan across ODIs and T20Is has been bowled or trapped in front more frequently than at any other point in time over a similar period in his career.

‘Bowled and LBW’ have accounted for 10 out of his last 24 dismissals in white ball cricket. Before that series, Dhawan would fall in these two manners once in every four innings. Since then, it’s a little over once in every two hits.

The mode of his dismissals must annoy him as he had shelved his troubles against the incoming ball earlier in the career. He has an odd, even awkward way, to turn the ball to the on side – he would retain his shape and at the last minute twist his upper body around to deflect the ball. But he had perfected that technique and his real Achilles heel was the delivery that left him late. But now, the older problems have resurfaced.

This trend encapsulates how badly he is judging the line and length of the ball. Dhawan is also losing shape while trying to play shots, with the head falling over. The footwork has never been astute, but this inadequacy looks more pronounced now. While in this duration he has played – and got out to – some really quick bowlers, he does appear a fraction late on the ball. This could be an unintended consequence of an adjustment he made during the Test series in England. In order to counter the prodigious lateral movement, Dhawan slowed down his bat swing, this newly acquired habit perhaps impacted his reaction time against quicks.

His friend Simon Helmot, the batting coach of Sunrisers Hyderabad, and family friend in Australia, talked about it. “You don’t really slow down the bat swing – what he is trying to do is to focus on watching the ball closely and playing it as late as possible. When you don’t pick up the length, you tend to rush and the bat-speed can appear all too quick as you end up pushing out your bat. What he tried to do (in England tour) was how to play late and not push out. When you see the ball well and play late, you can alter the bat speed pace,” Helmot told this newspaper.
Seen in that light, it perhaps means couple of errors have crept in: he isn’t seeing the ball that closely and as a result not playing late. The problems of lbw and bowled has led to more basic errors. Like in the last game. It was a fairly innocuous short of length ball outside off but he was almost frozen at his crease that he ended up just pushing it uppishly, away from his body, to backward point for a catch.

In addition, his old problems against off-spinners appear to have resurfaced. This means, frustratingly, that on some of those occasions that he has seen out the new-ball bowlers, he has been pinned by the offie in the opposition line-up.

Dhawan’s lack of runs have coincided with Rahul, who has had a nightmarish six months or so on and off the field, finding a semblance of form in the T20I series against Australia. It left captain Virat Kohli sufficiently impressed.

“It augurs really well,” Kohli said before the one-day series. “When he plays well, KL is operating at a different level, I feel, and we’ve seen him do that in the IPL last year and in patches over the last season we played as a team. Hopefully, he can keep batting like that. It’s very difficult to find a consistent player who can find good cricketing shots and still win you games and strike at over 140 or 150. He has all the shots and has a solid game as well. Hopefully, he can build on it and get as many games under his belt, playing as much cricket as possible. And then it will be interesting to see what happens in the final World Cup squad. Definitely, he has made a strong case for himself.”

This heaps even more pressure on Dhawan, even though the batting coach, Sanjay Bangar illustrates just why the left-hander remains central to India’s scheme of things for the World Cup.

“In the New Zealand ODIs, he had two really good innings, wherein whatever target we had got, he managed to stay not out with 75 in one game and half-century in another. Even here, he’s been getting starts. In the last game, he was batting really well, until he erred in his shot selection,” Bangar said after the Ranchi loss. “He’s an important player for us, and we know that if he gets going, he can give us that solidity.

It’s also vital to have the right-left combination going, so he’s a hugely valuable player for us, and we are expecting him to come good very soon.”

And that is the thing with Dhawan, just when it seems he has his back against the wall, he turns a corner. That’s the second, and probably more important thing, that his admission about keeping a diary on his batting tells us. He has fought off lean patches in the past and come out shining, often at the biggest of stages that cricket can offer. Be it the Champions Trophy in 2013 and 2017 or the 2015 World Cup. And India has benefited from it. His ‘thinking self’ has contributed to India twirling its ‘taches on the global stage in the fifty overs format.