Pro Kabaddi 2018, Jaipur Pink Panthers vs Haryana Steelers, UP Yoddha vs Telugu Titans Highlights: Jaipur Pink Panthers won their second match of the season with a 38-32 scoreline against Haryana Steelers in the Pro Kabaddi League in Greater Noida on Tuesday. Deepak Hooda was finally used as an all out raider and he proved his resilience by getting a Super 10. Later in the day, Telugu Titans came from behind to hold hosts UP Yoddha in a 26-26 draw.

UP Yoddha vs Telugu Titans

After building a 10-point lead, UP Yoddha let Telugu Titans claw back as the match ended in 26-26 draw. Srikanth Yadav has won the 'Perfect Raider of the match'

FT, and it's a TIE. This match with @UpYoddha was like a psychological thriller. Low on action, but full of twists (and a few scares 😜)!#UPvHYD #EeRanamMaadhe pic.twitter.com/gG7zzjedlt

A failed attempt by Nitesh Kumar and Telugu Titans level the match 26-26 in the second half. Only a minute left!

Great defence by Telugu Titans inflicts another all-out on hosts UP Yoddha after Rahul flicks home a touch point. The gap has been now reduced to just three points. It can go any direction now

Srikanth gets injured in his do-or-die raid for UP Yoddha in the second half. The hosts maintain their strong lead

We score a very satisfying tackle point at Mohsen's hands, but Yoddha Shrikant Jadhav takes a pretty solid hit to the head. 😮
We wish your warrior a speedy recovery, @UpYoddha
22-13#UPvHYD #EeRanamMaadhe pic.twitter.com/HpQrYHnNz2

Narender and Sachin Kumar help hosts UP Yoddha hold a nine point lead going into the half-time against Telugu Titans in Greater Noida.

First all out of the match is inflicted on visitors Telugu Titans. UP Yoddha leading with a six-point difference!

The hosts are desperate for an elusive victory in the home leg. They have begun well with a lead. Can they hold it? Mohsen goes down on his Do Or Die Raid as Telugu Titans are down to three men.

UP Yoddha vs Telugu Titans underway

Deepak Hooda helps Jaipur Pink Panthers defeat Haryana Steelers 38-32 in Greater Noida. This is their second win of the season as they put an end to the four-match losing streak

A great fight but it wasn't enough for our boys. We'll aim to come back stronger and better in our next game. 🙏#ShaanSeSteelers #JAIvHAR pic.twitter.com/0dV8nyYloQ

Vikash Kandola gets a Super 10, a brilliant performance by Kandola keeps Haryana in the lead.

The second half is underway. Naveen starts but returns with an empty raid but makes up for it by earning a tackle point for Haryana, initiated by Mayur Shivtarkar.

Karan Prashant Saxena from Indian Express reports: In an initiative by Star Sports called KBD Raid On, a resident of Greater Noida got a chance to win Rs 1 lakh by making a successful raid in front of a mix of defenders from Jaipur Pink Panthers and Haryana Steelers. Kunal Seth made a successful raid and he won Rs 1 lakh! He scored a point by putting his feet across the bonus line. Speaking to indinaexpress.com, Kunal Seth, a lawyer by profession, said he felt a little apprehension and scared while going into the mat, but he stuck to his strategies by crossing the bonus line and scoring a point against the defenders. 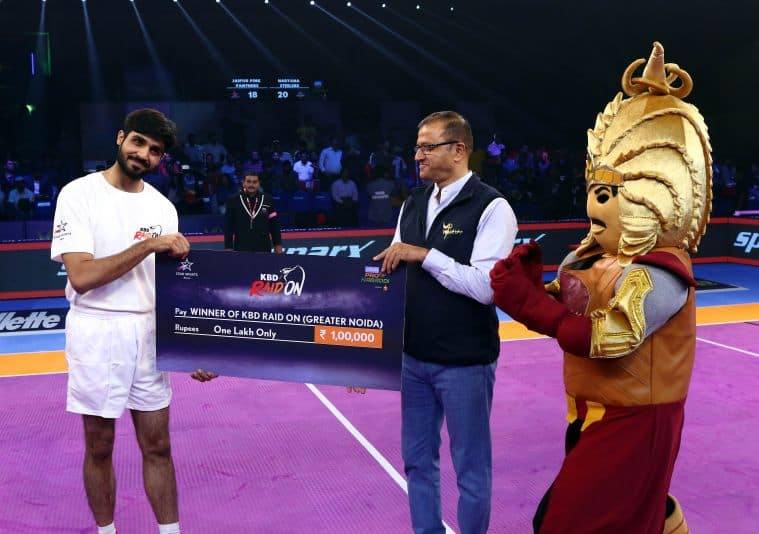 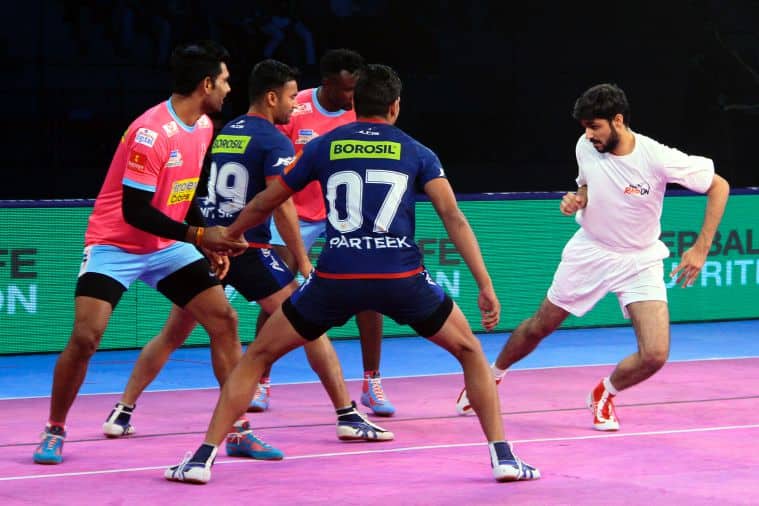 Haryana Steelers go into the half-time with a two-point lead over Jaipur Pink Panthers. Haryana also inflict an all out on the Pink Panthers at the end of the first half.

Naveen, who's been quite brilliant in this season so far, manages to get 3 absolutely glorious touch points and with a bonus. Haryana are now trailing by three points.

Jaipur began very well and continued with the strong lead. They have now inflicted the first all-out of the match on the Steelers. Jaipur with a six point lead.

Karan Prashant Saxena from Indian Express reports: Young raider Naveen, who scored 17 points against Jaipur the last time these two teams met is getting warm up in dugout. He could be coming on the field soon. Haryana coach Rambir Singh Khokhar instructing his players on how to defend Deepak Hooda who has already scored 4 raiding points.