His bent-knee sweep six against Bumrah was a standout shot but behind his fluent batting are years of hard grind, his mentors say 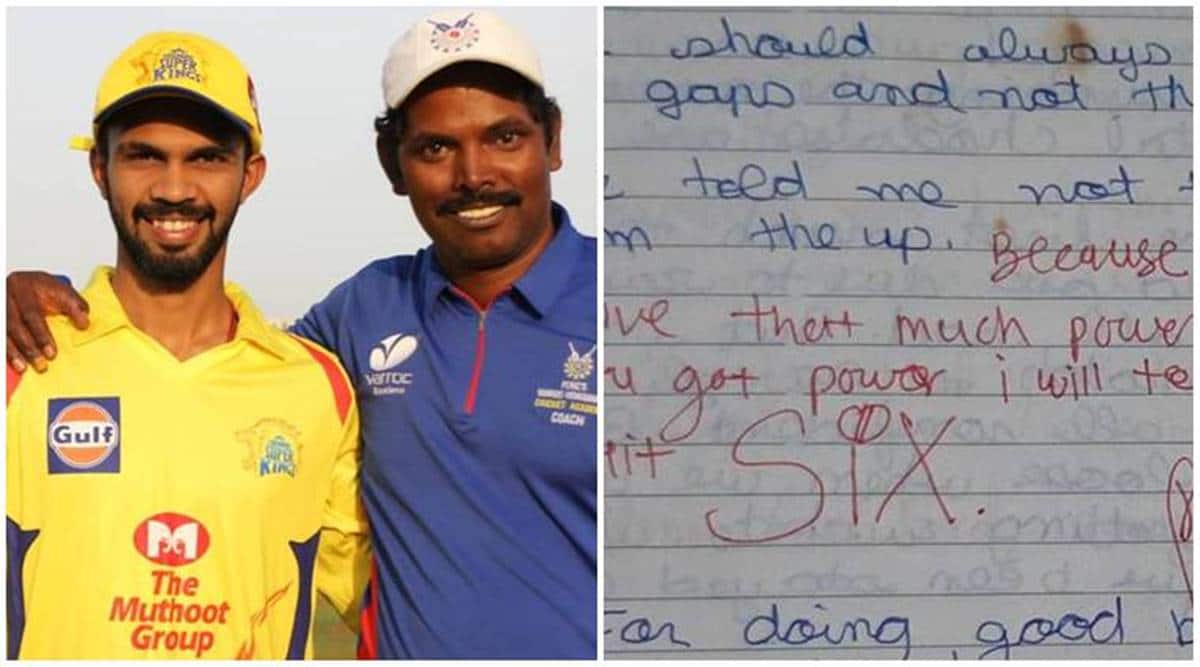 Ruturaj Gaikwad with his coach.

Coach Mohan Jadhav still remembers the moment when a student informed him that Ruturaj Gaikwad was crying in the back of the dressing room.

He was 13 and had failed in two games which would have propped his selection for the Under-14 camp of the Maharashtra Cricket. Young Gaikwad had arrived at that invitational tournament with seven centuries behind him but in the key selection-trial games, his bat had gone mute. “He told his friend, ‘what’s the point of those runs in league games when he failed in the main games’. Mohan Jadhav with a young Ruturaj.

For him the runs in the big games mattered the most,” Jadhav recalls to this newspaper. Jadhav allowed Gaikwad to weep before he pacified him saying that if he does well in the next game, Maharashtra will still pick him. Gaikwad hit 182 and hasn’t looked back since.

He still has had to wait out for his chances. Even with Chennai Super Kings. When he was benched for an entire season a couple of years ago, he dialled Jadhav, a touch upset. “I told him that they have kept you to watch and learn. The day your turn comes, you should be mentally ready. You are lucky that you are not getting a chance to play; imagine if you got and failed, it would take a lot of time to get back (into the scheme of things). Just be ready for your chance,” Jadhav recalls telling him. Just as he waited for the right moment when he was a young kid to start hitting sixes. He was 13 when he joined the Varroc Vengsarkar Cricket Academy in Pimpri Chinchwad in Pune where the coaches had a tradition of asking their players to maintain a daily diary.

Gaikwad’s entry dated 25-11-2009 ran thus: “Sir told me not to hit on the up. We should always watch the gap and not the fielder.” Just below, was his coach’s reply: “Because you don’t have that much power now. When you get power, I will tell you to hit a six.” Even his academy coaches would not have been prepared for the stunning bent-knee swept-six of Jasprit Bumrah he hit in an IPL game. It’s not only others who took time to realise his talent but at times even he doesn’t quite recognise his own worth.

When gifs and raves spread in social media about that Bumrah six, Gaikwad didn’t quite get the fuss. His close friend Naushad Shaikh, who played for Maharashtra, has a chuckle about the incident. “He didn’t even realise what a great shot he played initially. It’s his favourite shot and he actually plays it often. He called me later to say, “sach main yaar, kya shot maara maine! (True mate! What a shot I played!). He is not the one who talks himself up. He is shy,” Shaikh says.

Surendra Bhave, former India selector and ex Maharashtra coach, too was dazzled by that shot. “Bumrah ko maara boss!” But he too wasn’t surprised by the shot selection and in fact says that it might not even have been a predetermined shot. “I have asked him before in the past and he has told me that he sort of instinctively goes for it.” It’s quite a stunning instinct, then. Even as Bumrah released the ball full, Gaikwad crouched, bent his knee, and swept it as if it were a full toss from an offspinner. “Koi Badtameez shot nahi khelta, ”Bhave says says with a laugh before he makes sure it doesn’t get lost in translation. “Not a single bad-looking or any out-of-place shots.” He then perfectly summed up Gaikwad’s batting. “It seems every shot is the most appropriate shot for that ball. And yet, we see him sweeping, charging down the track, pulling, lapping, and the whole array of shots really – and still, each time it seems it’s a perfect shot for that ball.

What it tells you is the clarity of thought and calm temperament. There is no rush of blood or predetermination. And this even in a T20 format. I have seen him in longer forms and can tell you he is brilliant there.”

That clarity of thought has popped up on other crucial off-the-field moments. Sandeep Chavan, a coach at the Vengsarkar academy talks about the important decision that Gaikwad took when his school put him under pressure to choose either cricket or academics.

“His parents- Dashrat a former employee with DRDO (Defence Research and Development Organisation) and his mother a teacher, didn’t know what to do next. But Gaikwad himself said that he will choose cricket because at that age he felt he would do well in sports,” Chavan says. He must have been 14-15 then.

Chavan talks about how Gaikwad kept updating himself as a batsman in his years with the academy with his work ethic. The same attitude was observed later by Bhave as well with the Ranji team. 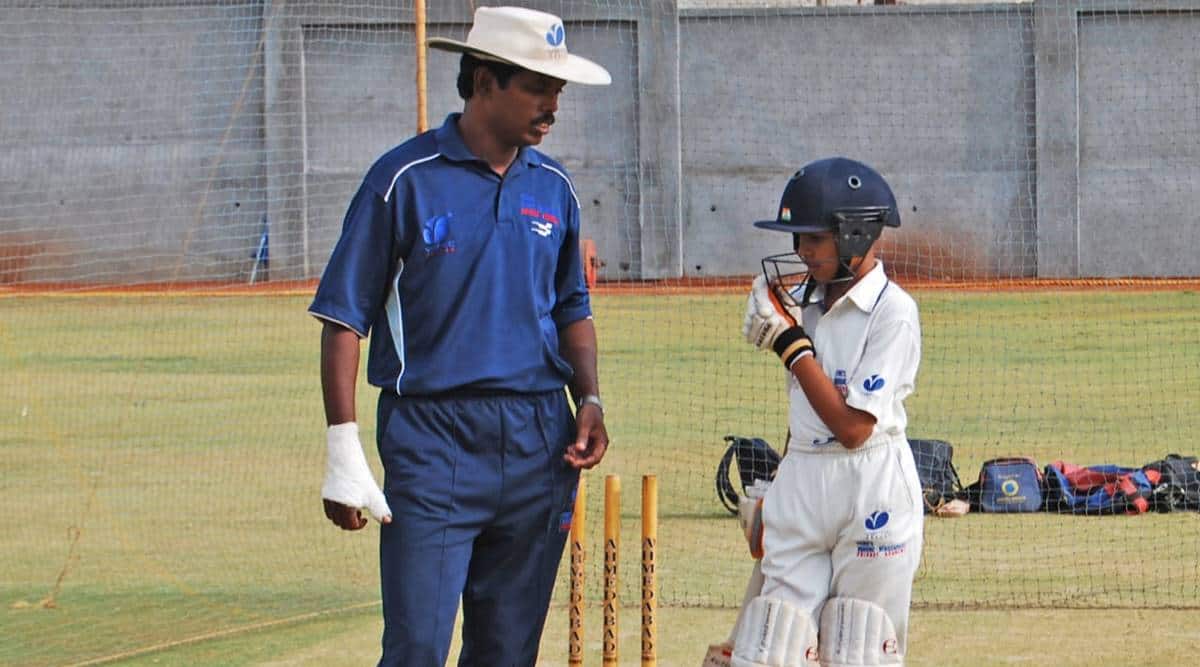 Mohan Jadhav with his ward.

“He wasn’t as great on the back foot as he is now,” Bhave says. “That has come in the last 3-4 years. He keeps updating himself. He is one of the quickest movers down the track and a very good player of spin. He is good with the backfoot-punch and pulls off pacers. A total all-round batsman who keeps things simple.”

Another facet that impresses and amuses Bhave is the earnestness. “He almost plays cricket as if it’s part of a 9 to 5 job, if you get the idea. In control, does his stuff, works hard, goes home. And comes back the next day to do the same! Very sincere and absolutely no airs about him,” Bhave says. “I have told him many times that this game has a great way of rewarding honesty and sincerity and he will get the rewards.”

It has come true this season where he has scored 635 in 16 IPL games and been the main architect for CSK reaching the final.

Eleven years ago, on February 10, Gaikwad had written in his diary: “Sir told us that concentration is very important. Sir also told us that we should not get bored when doing skills or drives. We should become mean, as they say in Marathi. You should become consumed by this activity. This activity should completely obsess your mind because passion creates history.”

His passion has certainly set him on the way to create one in IPL for now. Hopefully greater things await.