Virat Kohli: The king without a title

Kohli on final day as RCB skipper: Anger, disgust and a farewell remark - 'I gave my best .. don't know the response' 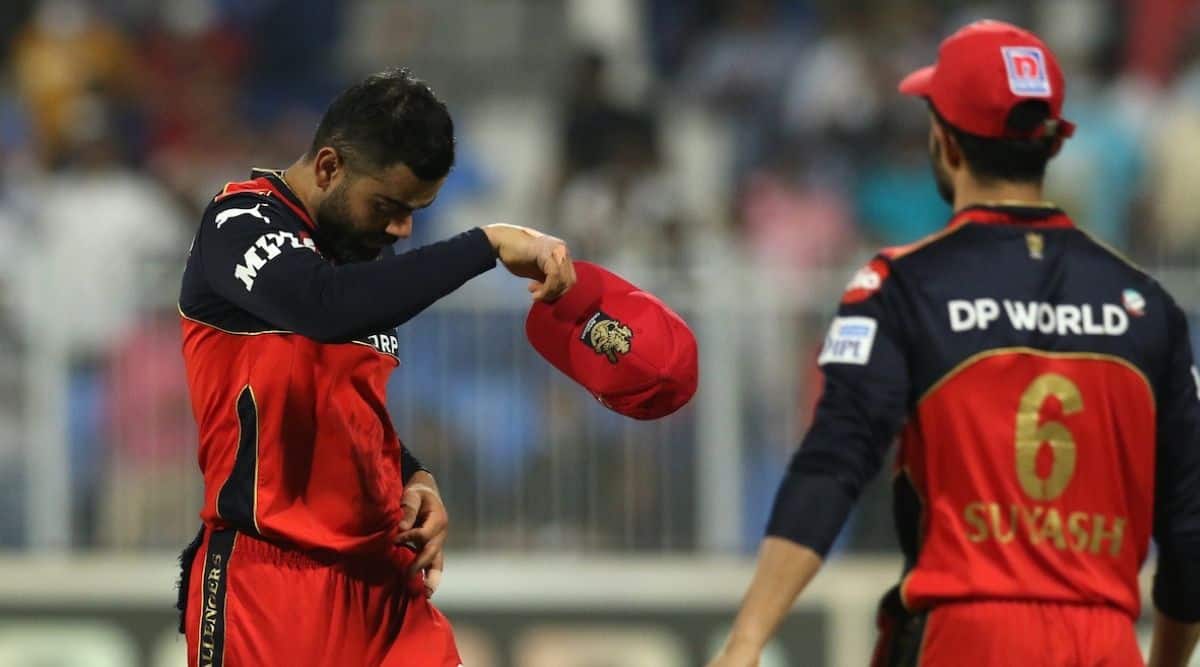 RCB captain Virat Kohli during the eliminator match of the IPL vs Kolkata Knight Riders on the 11th October 2021. (Sportzpics/IPL)

Just as the ball was jammed out for the winning run, Virat Kohli trudged from cover, head down, and glum. He snapped out of his reverie to shake hands with the players, slowly walked towards the stumps, and flicked the LED-lit bail off its perch. The lights went out metaphorically and literally on his last match as Royal Challengers Bangalore captain. No cup e-saala too.

What would the Kohli-cam show on his last day as RCB captain? Anger, disgust, frustration, nerve-popping celebrations, the occasional resigned-shrug-at-fate calmness, an ugly spat with an umpire, a sombre talk at the end about how he tried his best as captain, and a mentor-talk with Shubman Gill before the cameras finally looked away from his dark night.

What a journey this has been! 👏 👏#VIVOIPL | #RCBvKKR | #Eliminator pic.twitter.com/jYU3eydci2

Nothing much went right for Kohli on Monday, after a briefly-bright start. He made a tactical decision to take singles off the coterie of spinners from Kolkata Knight Riders and leave the hitting to Srikar Bharat, who struggled to a 16-ball 9-run knock. When Kohli eventually tried to hit Sunil Narine, he lost his stumps and saw his team meander to a sub-par total.

Virat Kohli walks back after his dismissal during the eliminator match vs KKR. (Photo by Pankaj Nangia / Sportzpics for IPL)

When he led the team on to the field, the instruction to every fielder seemed to be to try to wear out the ball quickly by throwing it on to the ground at every opportunity possible. It seemed he too would go the KKR way and unleash his spinners on a sluggish wicket. But instead, he never used left-arm spinner Shahbaz Ahmed.

Just before the 12th over of the chase, Kohli sought out AB de Villiers and Glen Maxwell for a long chat. It’s not known whether he agreed with or overruled them, but he brought on Dan Christian for a bowl. Three successive sixes flew off Narine’s bat in that over that sealed the game.

"I have tried my best to create a culture where youngsters could come in & play with freedom & belief.I have given 120% to RCB every time, which is something I will now do as a player.”

You have been an inspiration, role model and the torchbearer of RCB. #ThankYouCaptainKohli pic.twitter.com/tlC0uMH2iW

In between, there was an angry confrontation with umpire Virender Sharma, as Kohli flung the ball to the ground in disgust, and later saw his team-mates drop catches. He sighed, shook his head, roared in brief celebration, before the light finally blew out of his campaign.

Virat Kohli with teammates during the eliminator match on Monday. (Photo by Deepak Malik / Sportzpics for IPL)

In the seventh over of the chase, bowled by Yuzvendra Chahal, Kohli’s emotions bubbled over and he had a face-off with Sharma. The umpire had negated an LBW appeal by Chahal against Rahul Tripathi. And when the third umpire agreed with Kohli, scenes heated up. Kohli and Sharma had a chat and Kohli even flung the ball down in anger. He picked it up and continued the discussion till the new batsman arrived.

One has seen captains get into spats with umpires before. Once even MS Dhoni marched from the dugout to the playing arena to have a confrontation with an umpire. Sharma was decidedly having a bad night; not just with that dismissal but there were a couple during RCB’s innings that went against Kohli’s team. At the end of the Chahal over, Sharma walked briskly to Kohli and gestured him to come for another tete-a-tete. This time, it was Sharma who spoke at length and by the end, Kohli had a wry smile. Not long after when the Fair Play table showed RCB at the bottom, Sunil Gavaskar piped up on air to suggest that it wasn’t a surprise after this game.

Man of many moods

The monk-like calm visage also made its appearance. It was on the fifth delivery of the 11th over. Kohli had made visible peace with agitations of the recent past, and stood still like a rifle shooter on a range with his hands crossed behind his back, un-Kohli like, shaking his head. Sometime before that, the umpire had summoned him for a ‘chill, Captain’ lecture, urging him to calm down. Then Venkatesh Iyer was dropped by Ahmed – the ball bouncing off his uncertain palms. Iyer stuck his tongue out with a glint of mischief and replayed the arc of the shot. But Kohli responded to the drop by calmly standing there, shaking his head and willing himself to breathe deep. Not breathing fire, just moving on. Iyer would soon perish, caught behind from a chunky edge. And Kohli would return to his nerve-popping celebration, a bit abbreviated though. Like a roar-lite. A rationed celebration by his standards. He would immediately take a deep breath and adopt a monk’s visage. Until the next wicket fetched up. The calm between wicket-induced storms was growing longer in Kohli-land.

The next over was the game-deciding move to bowl Christian. From then on, a sombreness settled in Kohli with the occasional moment of lung-clearing roars. There was even an ironic moment involving the minister of spirit of cricket Eoin Morgan. Dinesh Karthik had slid his bat in an effort to reach the crease at the non-striker’s end and possibly affected Kohli from collecting the throw cleanly. As the ball scooted away from Kohli’s grasp, Morgan and Karthik took the second run. It was Maxwell who shot a question to Karthik about the possible infringement and the decision to run the second, but Kohli remained mostly silent. Or so it appeared. There was one final nerve-bursting Kohli scream when Karthik was caught behind but the poor man didn’t have the luxury to carry on with his celebration for long as the umpires went upstairs to check the legality of the catch. It took several minutes to finally decide that it was a clean catch but by then passions too had evaporated.

Kohli had one final big decision to make. Should he go with Christian for the final over or bring on Maxwell (two left-handers Morgan and Shakib Al Hasan were batting) or even bring up Ahmed from the cold. He went with Christian and Shakib settled the game on the first ball with a paddled four. Seconds later, Kohli would flick off the bail.

This is not just a team. This is a family. ❤️

He summoned up all the poise he could muster to speak about his contributions for RCB as a captain at the post-match ceremony. “I have tried my best to create a culture here where youngsters could come in and play with freedom and belief. It is something I have done with India as well. I have given my best. I don’t know how the response has been, but I have given 120 per cent to this franchise every time, which is something I will now do as a player. It is a great time to regroup and restructure for the next three years with people who will take this ahead. I don’t see myself playing anywhere else. Loyalty matters more to me than worldly pleasures. I would be in the RCB till the last day I play in the IPL,” he said before wandering off to have a chat with Gill.