IPL 2018: Captaincy is the least of Delhi Daredevils’ worries 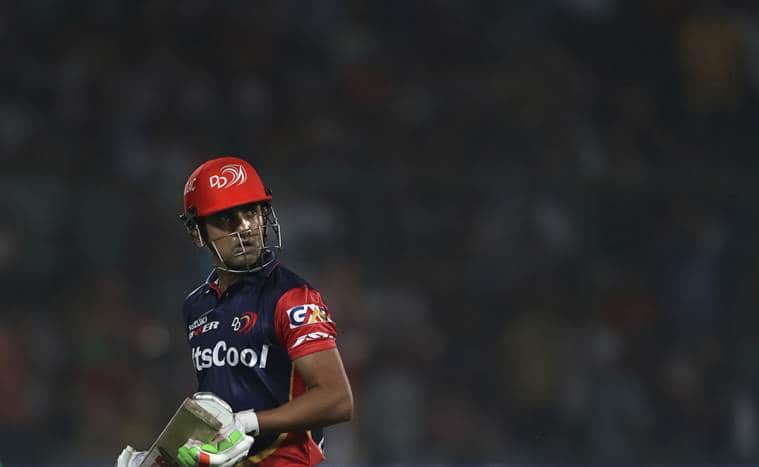 Gautam Gambhir is a symptom, not the ailment, afflicting the Delhi Daredevils. (Source: AP)

When Chennai Super Kings’ Imran Tahir cleverly induced a false shot from Royal Challengers Bangalore’s AB de Villiers to end a rampaging knock at the Chinnaswamy Stadium on Wednesday night, it was easy to picture a drawing room in Punjabi Bagh or Shahdara being traversed by an airborne shoe, belonging to a Delhi Daredevils fan, ready to rattle the TV screen.

On a day when a leadership crisis, triggered by some consistently awful team performance, hit the Delhi Daredevils camp, it wouldn’t have escaped their fans’ attention that both these fine gentlemen once belonged to the Daredevils stable. As did Bangalore opener Quinton de Kock, who made a fifty in the game, and even Sam Billings, who took the catch that dismissed de Villiers.

To spite DD fans further, another former Devil, Umesh Yadav, bowled a brilliant spell up front. Finally, rubbing it in, even Pawan Negi, who became a byword for auction profligacy after Delhi spent millions on him a few season ago, was there in the RCB colours and got smoked for three sixes in an over — a painful recollection of their team’s folly.

This was not a rare alignment of such stars; most teams have a performer or two who once called Feroz Shah Kotla his IPL home. In fact, one can make a formidable, potentially IPL-winning, fantasy team with just Delhi Daredevils discards. It also underlines an issue that runs deeper than the current captaincy issue: The problem of identifying a set of players and persisting with them. Other teams, too, have seen personnel come and go, but the successful ones in the IPL have stuck to a core.

But there’s been neither ‘identification’ nor ‘persistence’ when it comes to Delhi Daredevils. And no one captures it better than Gautam Gambhir, the man Shreyas Iyer replaces as captain after the team has again refused to budge from the foot of the table. In 2011, when he still had a lot to offer, Delhi parted ways with Gambhir. He went on to lead Kolkata Knight Riders to two IPL trophies. In 2018, when it was evident that Gambhir’s batting had become rather slow (a strike rate of 128 in 2017) by ever-evolving T20 standards, they picked him at the auction and handed him the reins.

Gambhir is a symptom, not the ailment, afflicting the Delhi Daredevils. How else could it be explained that Delhi brought up the rear thrice in the seven seasons that he was away from the team?

Evidently then, the higher-ups in the team faced some heat at the hurriedly called press conference on Wednesday. Team CEO Hemant Dua was asked that because Delhi have lost 87 out of 142 matches in 11 years (it’s in fact 84 losses out of 150), would he resign.

Dua shot back: “Do you want me to submit my papers…I will do that and will you join in my place? We knew these questions will be brought up. As journalists, you should, for once, respect when someone (Gambhir) takes a decision and give him the due credit rather than find stories around it… because that’s the problem with us.”

That, as the disgusted fans across drawing rooms in Delhi would agree, is not the problem. 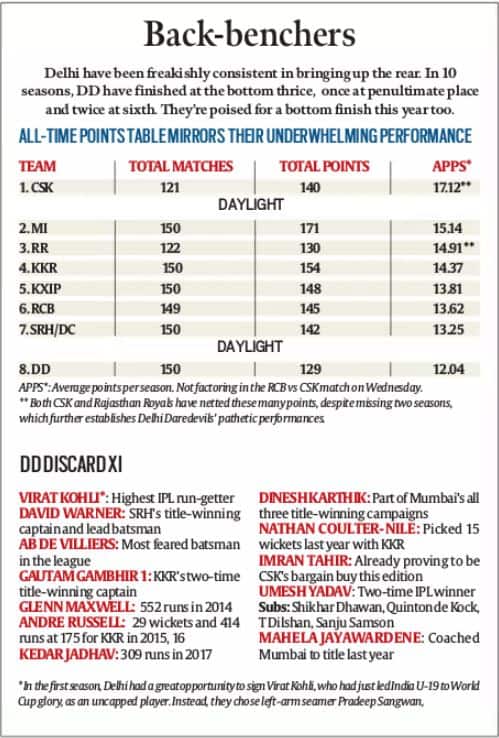 Both CSK and RR have netted more points than DD despite missing two seasons, which further establishes the latter’s pathetic performances.

Virat Kohli: Highest IPL run-getter (In the first season, Delhi had a great opportunity to sign Virat Kohli, who had just led India U-19 to World Cup glory, as an uncapped player. Instead, they chose left-arm seamer Pradeep Sangwan)

AB de Villiers: Most feared batsman in the league