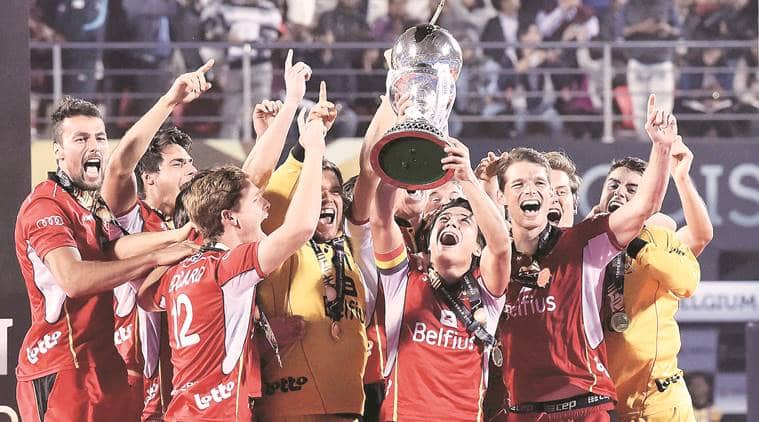 Belgian players celebrate with the World Cup trophy after beating the Netherlands in the final in Bhubaneswar on Sunday. (Photo: PTI)

Arthur de Sloover was sprinting towards the corner, punching the air and yelling like a madman. His teammates, all 17 of them, chased him down and jumped on top of the stocky defender. Shane McLeod, the shy Kiwi who’s in charge of this expressive Belgian squad, threw a bottle of water some 50 yards away in celebration. He teared up and was jumping in joy near the half-line.

The Dutch players, some of them at least, buried their faces in their hands and sank to the ground. The crowd played along and the volunteers appeared on the pitch virtually out of nowhere, carrying the podium with the ‘Champions’ board on which Belgium would stand.

They were the world champions. Or were they?

Amidst the emotionally-charged scenes, everyone almost missed the calm conversation Dutch goalkeeper Pirmin Blaak was engaged in with the umpire. Blaak, once again putting up a heroic performance between the posts, claimed that the ball had touched De Sloover’s foot when the striker was trying to go around him while taking the decisive penalty – a violation of the game’s rules. A TV referral ensued.

McLeod, who had told his players that a Belgian win ‘was written in the stars’, was the first to notice the umpire making a tiny square with his hands, signaling a decision review. The footage was reviewed, and it showed that the ball had indeed touched De Sloover’s foot. The whole night both teams had been so careful, that you could count on your fingers the number of times the ball would’ve touched the feet of players from either team.

There couldn’t have been a more inopportune moment for this foul to take place. And Belgium couldn’t believe they were asked to stop celebrating. “I thought, ‘is this a sad joke’?” McLeod said. “For a split second, we had won the World Cup. And then, it was taken away from us.”

Luckily for them, they won it again. In the sudden death shootouts that followed, Florent van Aubel dug into his years of experience to calmly put the ball past Blaak. The pressure was now on Netherlands’ most experienced player Jeroen Hertzberger to convert the penalty that would keep his team alive. Hertzberger took a couple of steps to enter the ‘D’, went to his left but his tomahawk went flying over the bar.

Once again, the Belgians ran to a corner and huddled over each other. McLeod was jumping again, this time showing more energy. And most Dutch players sobbed uncontrollably.

Belgium were, finally, the world champions. And this time, no one would tell them to stop celebrating.

The shootout was a consequence of a highly technical, but cagey, final that ended goalless after normal time. The Dutch would accuse Belgium of playing ugly – “creating a red wall in their ‘D’”, as a player said. But Belgium had come with just one game-plan – to win the final, no matter how.

They’ve been waiting for this moment for far too long. Just seven years ago, Belgium were ranked 13th in the world, below India and way below powerhouses that Australia, Germany and the Netherlands are.

At the World Cup, every team tried to play like them. But no one could beat them. And after three weeks of high-intensity, tactically superior hockey, they have been crowned world champions and, as the icing on the cake, declared the world’s number 1-ranked team by the International Hockey Federation.

There couldn’t have been a better reward for one of the most gifted hockey sides that has had a sustained period of dominance. This team was an amalgamation of three golden generations of Belgian hockey. One, that includes the likes of Van Aubel, Simon Gougnard and Loick Luypaert, broke the proverbial glass ceiling by winning the European under-18 Championship a decade ago. That team lifted Belgium out of the wilderness and made them a team that everyone started to notice.

Then came the group that includes the likes of Arthur van Doren, the defender who was named the World Cup’s best player. They continued Belgium’s dominance at the under-18 level and added the European under-21 crown.

Faltering in the past

Together, the two batches parachuted Belgium into the world’s top five. This was a squad that promised so much but faltered at the final hurdle again and again – be it the Rio Olympics, where they lost in the final – or the European Championship soon after, in which the Netherlands defeated them.

Just when everyone started to believe that Belgium’s golden generation wasn’t destined for a golden finish, another wave of Belgian wunderkinds took the world by a storm. This batch, which includes players like Victor Wegnez, Antoine Kina and de Sloover, won the silver at the 2016 junior World Cup, beaten by India in the final.

McLeod shepherded this bunch of GOATS – arguably, at least – and made them into a team that was unbeatable throughout this World Cup, overcoming unprecedented adversities.

They were dealt a massive blow even before they could board their flight to Bhubaneswar when Emmanuel Stockbroekx – their key drag-flicker – was ruled out with an injury.

Then, before the group stage ended, their most experienced player John-John Dohmen had to cut short his campaign. What seemed like a routine bronchitis issue turned into something far more serious. Dohmen, considered world hockey’s most cerebral player, was diagnosed with pneumonia and as the team played the final, he was in a hospital in Bangkok – he wasn’t allowed to board a connecting flight due to illness.

And then, the night before the semifinal against England, the team was informed about the death of Gougnard’s father. “All these problems only brought us closer,” captain Thomas Briels said.

On Saturday night, Stockbroekx sent a 50-minute video to the team which had messages from the families of all players. “We saw that and the coach told us, ‘our win is written in the stars,’” Briels said.