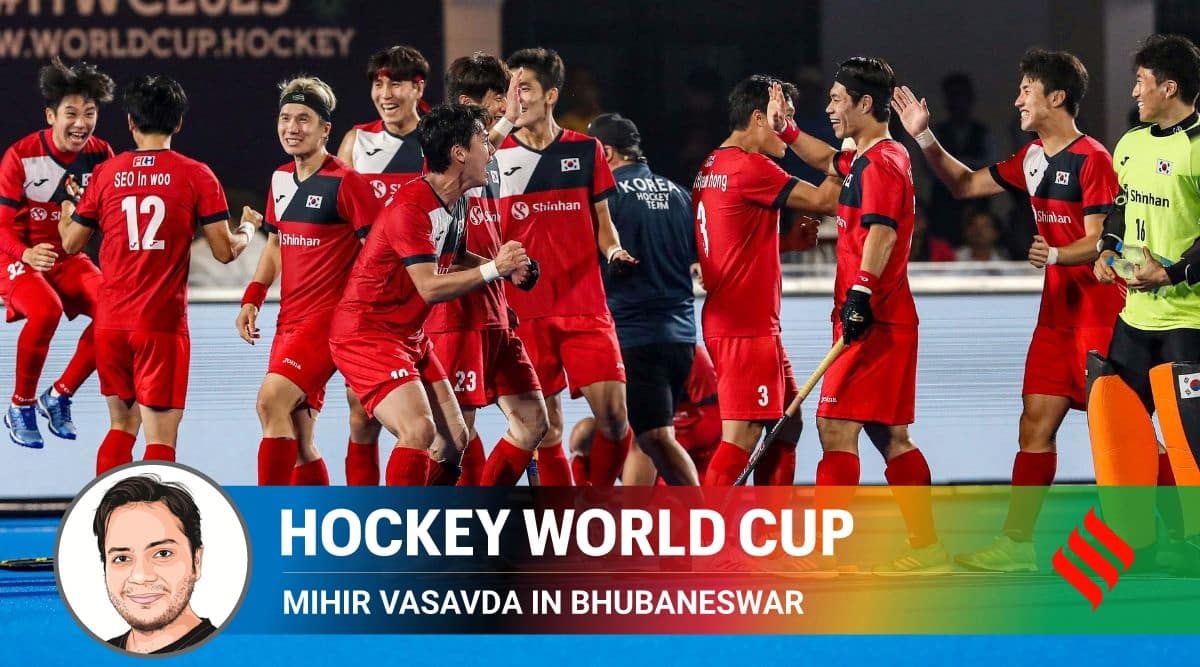 On Monday, there was the first glimpse of the revival of a fallen giant; a team that has been in an Olympic final, won four Asian Games gold medals and clinched the most number of continental titles. And of course, it was ‘Jangbas’ who was responsible for it. (Credit: Hockey India)
Listen to this article
Hockey World Cup: ‘Jangbas’ drag-flicker Jang Jong-hyun is South Korea’s Sohail Abbas
x
00:00
1x 1.5x 1.8x

As far as nicknames go, ‘Jangbas’ is as unconventional a fusion as they come. It isn’t the type that’ll strike fear in the hearts of opponents. And certainly not the endearing kind.

But for Jang Jong-hyun, it is an ultimate honour. In South Korea’s modest hockey circles, the drag-flicker has acquired a legendary status and earned direct comparisons with Pakistani great Sohail Abbas, giving rise to the name ‘Jangbas’. To be sure, Jang’s body of work isn’t even a speck on Abbas. But for two decades, the 38-year-old has been holding together South Korean hockey, keeping it afloat while it teetered on the brink. All, with his sling-shot-like drag-flicks.

On Monday, there was the first glimpse of the revival of a fallen giant; a team that has been in an Olympic final, won four Asian Games gold medals and clinched the most number of continental titles. And of course, it was ‘Jangbas’ who was responsible for it.

DRAMA at the Kalinga as Korea comes back again and again to win against Argentina. Here are some moments from the game.

He scored twice with his drag-flicks and then deceived the Argentine defence with a beautifully-worked variation to set up his teammate as the ‘Red Bumblebees’ stung former Olympic champions Argentina in what will be remembered as a World Cup classic. South Korea came back from two goals down in the final quarter to make it 5-5 and then won the penalty shootout 3-2 to enter the quarterfinals upon their return to the big stage after eight years.

The wild celebrations that followed carried on until the lights went off inside the Kalinga Stadium. They are the only Asian team left in the tournament but coach Shin Seok-kyo wasn’t gloating. “It’s fantastic,” Shin beamed. “There was a lot of pressure on my team. It was very sad that India, Asia’s leader, lost. And then, Malaysia and Japan did also not make it. So, I am happy that an Asian team is in the quarterfinals.”

For Shin, this may be an ‘Asian win’ but there is little doubt that the night belonged to South Korea. He is careful to not go as far as calling this a resurgence but Shin surely is starting to dream. And an affirmation that South Korea is on track to be counted among the hockey elite once again.

Shin, who amassed more than 200 international caps between 1989 and 2002, was at the centre of a golden period for South Korean hockey when they were the undisputed best in Asia – having won the Asian Games (1994 and 2002) and Asia Cup (1994 and 1999) twice each – and a force to reckon with globally, reaching the final of the Sydney Olympics where they lost to the Netherlands.

Nicknamed ‘Commando’ because of his physique, Shin was one of the finest drag-flickers of his era and a year after he retired in 2002, Jang took over the mantle of being South Korea’s set-piece specialist. And although they never could replicate the highs of the 1990s, South Korea remained a continental giant until the wheels slowly started to come off with the team failing to qualify for the last two Olympics and the 2018 World Cup.

It wasn’t a mystery as to why Korea fell from grace so spectacularly. “Korea is not interested in hockey,” Shin said. “It is not a famous sport.”

And so, the sport suffered. Unlike India who have unlimited resources, Malaysia who boast of Asia’s strongest domestic structure and Japan who are still reaping the benefits of fund injection after hosting the Olympics, South Korea – once the gold standard of Asian hockey – fell behind on all markers. They didn’t have the talent pool, domestic structure, or money.

“We have four clubs and five university teams, which put together provide between 150-200 players for national team selection,” Shin says. It’s been like that since his playing days.

To put that in perspective, while Shin has a player pool of 200 to choose from, his team’s opponent in Wednesday’s quarterfinal, the Netherlands, has close to 250,000 registered players. The challenges don’t end there. Three clubs – Seongnam City Hall, Incheon City Sports Association and Gimhae City Hall – largely fund the national programme and nurture the little talent that remains after most of it falls through the cracks at multiple levels.

“They start at middle school and then proceed to high school. At both levels, there are 15 teams each. After that, you progress to University, which has five teams,” Shin says. “After University, some players go to serve the Army for two years, and after they finish the Army service, some go to the clubs and some players retire. It is very difficult to keep the players together.”

The save and then the celebrations!

Getting back on track

Shin, who besides being South Korea’s coach since 2018 is involved with the country’s biggest club Seongnam, says he is focused on sharpening the basic skills of his players. “Ball control, open receiving, how to get that kick while attacking, how to defend…” Lacking any depth to stick to one playing style or philosophy, Shin’s team is known for its tactical flexibility, altering its style as per its opponent.

A stubborn team to break down, South Korea can defend deep against sides that are superior to them and aggressive, can play on the counterattack and are dangerous from penalty corners, with Jang – who has scored 109 goals in 313 international appearances during his 20-year stint with the national team – as the main drag-flicker.

It has worked as South Korea have been making all the right noises in the last 12 months. The team has reclaimed its lost continental glory by winning the Asian Champions Trophy in 2021 and then becoming the Asia Cup winners after a gap of nine years.

Half of the players in their World Cup squad are in the early-to-mid 20s, giving Shin the hope that their best is yet to come and also sounding out a warning for a wavering India with regards to this year’s Asian Games, on which the South Korean coach has firmly set his sights.

Before that, on Wednesday, Shin’s side can gatecrash the party and win back its seat amongst the elite. “Who is in the quarterfinal?” the coach teasingly asks. “Who is it, Holland? Ooh, such a strong team!”

Daunting it may be, but with ‘Jangbas’ – the World Cup’s second-highest scorer from penalty corners – leading them from the back, South Korea will believe it’s not impossible.

Digvijaya Singh: The Diggy Raja who may have dug one hole too many