All pace and no patience: Indian men, women lose to Spain

It’s important for India to realise all that pace is of no use unless they combine it with patience. 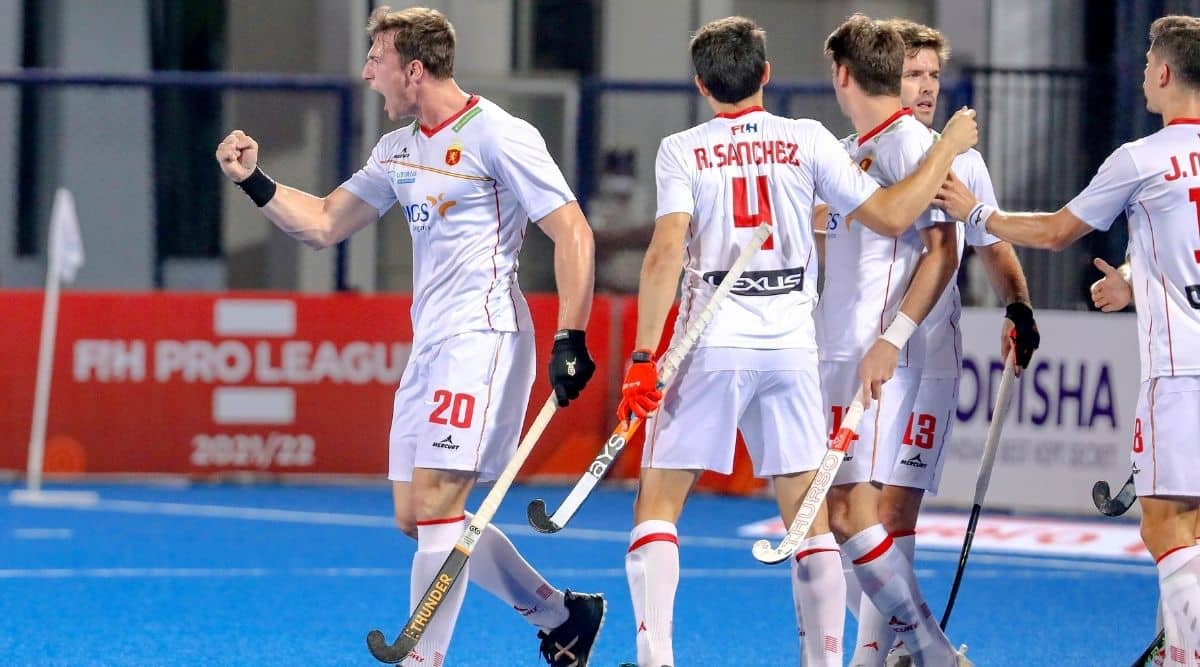 Sunday was the third time since Olympics that the Tokyo bronze medalists allowed five goals in a match. (Hockey India)

Nothing can illustrate the blinding speed at which India played better than the fact that even the high-definition cameras placed around the Kalinga Stadium could not properly capture the move.

If you haven’t already, click here to subscribe and get Sandeep Dwivedi’s newsletter straight in your inbox (https://indianexpress.com/newsletters/sports/)

Down 2-3, India were piling pressure on Spain, making repeated inroads into their ‘D’. One such move came from the left-wing, when a cross was played in but found no Indian stick. As it sailed out of play, India asked for a review, seeking a penalty corner for a push by a Spanish defender on one of the attackers.

Raghuprasad RV, the television umpire, pored over multiple angles and numerous replays. But after five or so minutes, he turned to the on-field umpire, Javed Sheikh, in dismay – the speed of India’s movements and the pace on the cross was so high that it was all but a blur, even in slow-motion replays! If ever there was any doubt about the speed at which India operates, those were put to rest.

However, it’s important for India to realise all that pace is of no use unless they combine it with patience. The 5-3 loss to Spain in the FIH Pro League on Sunday, a day after they secured an unconvincing 5-4 win, underlines this.

Like a sports car that goes from 0 to 100 in the blink of an eye, India unfailingly transitions from defence to attack within seconds. But almost every time, they seem in such a rush that they are unable to pick the right pass, resulting in either the ball going out of play, or them losing possession.

The latter has caused severe problems. Every time India have lost the ball in the two matches against Spain this weekend, they have looked like conceding a goal. One of the biggest concerns for coach Graham Reid, who has been trying new players in different positions, will be the ease with which teams have been opening up his defence.

Sunday was the third time since the Olympics that the Tokyo bronze medallists allowed five goals in a match; France and Japan are the two other teams who have inflicted such miseries on the Indian defence.

READ |Mohammad Shami: ‘Those who troll aren’t real fans, nor are they real Indians. I know what I represent, fight for my country’

India ended its Olympic medal drought by playing with a certain level of calmness, especially in the attacking third, which helped them in making the right decisions in crunch moments. The other factor was defensively, the team looked structured and disciplined. These factors have been missing in the recent games India have played.

Against Spain on Sunday, India would feel goalkeeper Suraj Karkera could have done better in saving at least a couple of goals he conceded, given that the shots in the first and fourth goals almost went right through him. Karkera, however, could have been shielded better by the defence in front of him, which went missing on most occasions.

One of the takeaways for India from this match will be the performances of Sukhjeet Singh, who dribbled past the Spanish defenders to score a goal on debut, and his strike-partner Abhishek, who continues to impress after debuting earlier this month.

In the two youngsters, India may have found players who can score smart field goals. But what the team needs is some cunning defenders, who can stop the team from leaking goals.

Fragility during turnovers is what let down the women’s team as well.

India came back from a goal down three times in the match but Xantal Gine scored the winning strike for Spain with seconds left to play, making another comeback impossible. India lost 4-3, their first defeat of the Pro League.

Despite the loss, there is a lot to build on for Janneke Schopman from Sunday’s match. Savita Punia was once again rock-solid in goal, even saving a penalty stroke, but India made one too many defensive errors, which overshadowed the extra shift put in by the attackers.

Two out of the three goals were indicative of the variety of skill-set the team possesses. Debutant Sangita Kumari opened the scoring for India by picking the ball just around the ‘D’ on the right, turning around her marker, dribbling past two defenders and avoiding a tackle by an onrushing third before slotting it past the goalkeeper. The goal showed why Sangita is rated highly on the domestic circuit for her scoring abilities.

And while her goal was all about skill, Salima Tete displayed another dimension of the women’s team: speed. Salima got the possession in front of her dugout and marched ahead, rapidly shifting gears as she approached the ‘D’. With no player able to match her speed, Salima found herself with a lot of time and space to get a shot in. And instead of going for power, she chose placement as she squeezed the ball past the goalkeeper at the near post.

Unfortunately for them, this wasn’t enough to get a result.

A shelling, a young girl, and hopeless moments in a hospital