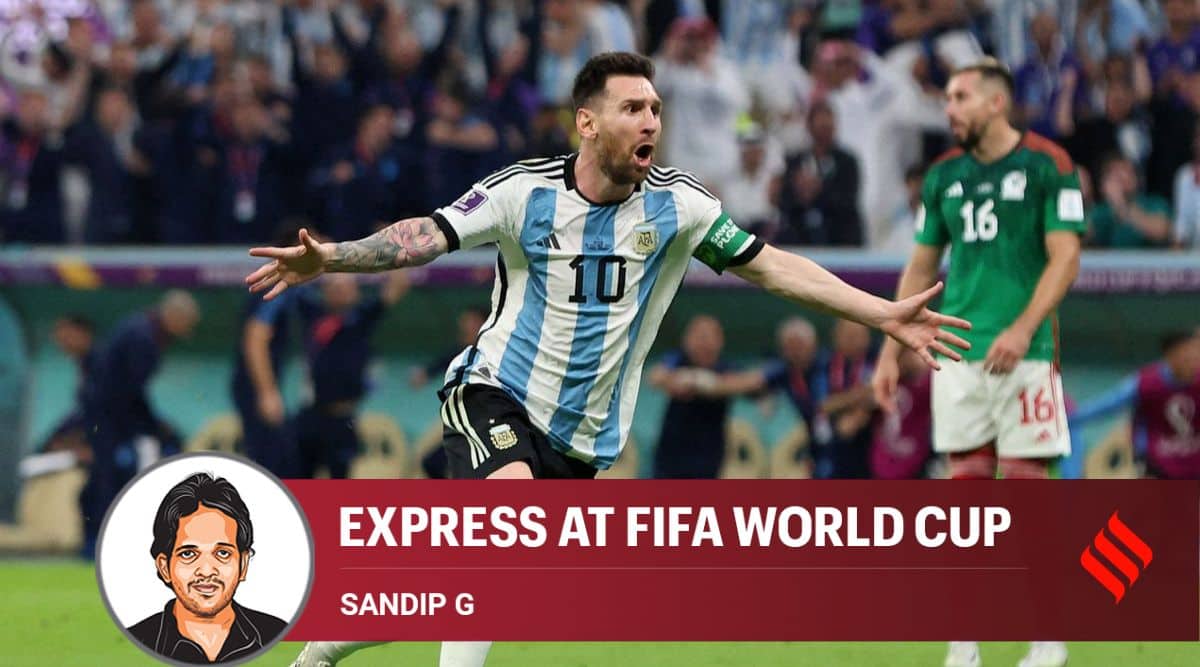 Lurking unmanned, 25 yards from colourfully-attired Mexican goalkeeper Guillermo Ochoa, Lionel Messi picked a pass from Angel di Maria from the right wing. And stopped. The world around him too stopped. It always does when Messi has the ball on his left foot. Eighty thousand pairs of eyes in the Lusail Stadium, no matter where they sat or stood, fixed their gaze onto the most precious left-foot on the earth. So would have millions of eyes around the world. For, the ball falling onto Messi’s foot is an event in itself. It’s a moment pregnant with infinite possibilities, dimensions, scripts and routes, when Messi takes the human form of destiny; or destiny takes the form of Messi.

That world-stopping first touch cannot be glorified more. It was a touch more beautiful than the goal itself. An ounce heavier, the barging Mexican defenders would have hacked it away. A drop lighter, he would not have found the power. With the corner of his right eye traced the perfect path to beat the countless legs and bodies that would intervene and the lunge of Ochoa in the ball’s goal-ward journey. The eyes settled on the bottom corner. The mind settled on a low grass-trimming drive. Twisting his lithe frame a fraction, he let his left-foot rip, a boot-snap at the last second imparted the direction.

Like an artist salivating at the marvel of his craft, Messi watched the ball ripple the nets. The world and eyes stopped again, and at the precise moment, Messi teared away into the distance, hands spread out, a few drops of tears rolling down his eyes, roved for di Maria, the provider of the goal and wrapped him with the tightest of embraces. When the festivities were finally over, Messi looked and winked skywards. He would have found his destiny written on the starless sky. He was the lone star in Lusail.

In the dugout, coach Lionel Scaloni covered the tears bursting from his eyes with his palms. “At that moment, half the world would have wanted to hug him,” he would say. His assistant Pablo Aimar wept uninhibitedly. Even Mexican supporters wept. Messi is the single most unifying force in football. It was such an emotional moment for Argentina, a moment of redemption, a moment of liberation. From the deep abyss of agony and shock, after the Saudi Arabia jolt, Messi has lifted them to the peak of ecstasy. Argentina are not yet assured of knockout tickets, might not even qualify, might stumble against Poland. But here was the moment. Here was Messi. Here was the kiss of life. In Messi’s own words, “Peace of mind.”  He would say after the match: “It is a weight off our shoulders, a reason for joy and peace of mind because it is all down to us again.”

It would not be the most aesthetic of Messi’s goals. It was not the most divine of his goals. But it was, inarguably, the most important of the 93 goals he has scored for his country. A goal that unburdened, if so slightly, the burden of being Messi. A goal that would make himself and the world around him feel lighter and joyous. A goal of pure cathartic relief. It’s the context that makes the goal. Messi in his last World Cup, as for now; his team and country shocked after the Saudi heist, a lot of teams fail to recover from such defeats; a timid, tense first-half when nothing clicked; everything clacked. Messi was heavily marked, his feet tied, inspiration smothered. His attacking colleagues were ponderous and flat, as if the Saudi pain still lingered, as if they felt lost. Argentina and Messi could see the dream and the world crumble in front of their eyes. Lose this match, and there would be no point of return. Messi would slip into the horizon with the eternal regret of not having won a World Cup. A dream Argentina had seen a million times over in the last seventeen years, since Messi first wore the Albiceleste shirt, was to turn nightmarish.

With the fear of a #FIFAWorldCup exit looming, Lionel Messi reflects on a superb performance from his @Argentina‘s teammates and a massive victory against Mexico.

His dream was 25 minutes away from slipping away when Messi found the ball at his left-foot. The pressure and burden that would have weighed on his shoulders might have crushed his shoulders. But saw the lease of light twinkling on the bottom corner. His left-foot would not betray him; his destiny would not cheat him. He then unfurled the shot that lifted a country and more from the depths of despair.

The goal changed the mood. From doubt-ridden wallowers, they transformed into ruthless destroyers. Freedom and joy returned to the game, creating more chances and storming Mexico’s goalmouth. Even Messi, mostly sombre and grim in the game, began to smile more often. Another goal was inevitable, and the 21-year-old Enzo Fernandez uncorked a fizzing curler past the outstretched arms of Ochoa to become the second youngest goal-scorer for his country after Messi. The celebrations were wild, the overpowering emotion was one of triumph and not catharsis. He later dwelled on the importance of the goal: “We can’t give up now. We have all the finals to play – we can’t make mistakes. We knew we had to win, that another World Cup was starting for us, and we knew how to do it.”

The Messi dream has been reignited; the Argentina dream has been revitalised. But the ultimate realisation of the dream would depend on how fast Argentina could revive their 36-match-unbeaten form. But between now and the Poland game, they could dream. And relive the Messi moment, an event in itself. A moment less than a second, but a moment that would live on forever.