Fans played a prank on a Wikipedia page of Chelsea managers and changed their latest manager's name to the Spanish goalkeeper Kepa Arrizabalaga. Chelsea’s Kepa Arrizabalaga protests after he is called to be substituted. (Source: Reuters)

After Chelsea keeper Kepa Arrizabalaga openly defied his manager Maurizio Sarri and refused to be substituted during the League Cup final against Manchester City on Sunday, fans played a prank on the Premier League club’s manager list on wikipedia page and changed their new manager’s name to the Spanish goalkeeper.

Watching Kepa struggle with cramp, and with a penalty shootout looming to settle the League Cup final, Sarri summoned a substitute from the bench. In one of the strangest incidents in in a Wembley final, Kepa refused to obey Sarri for substitution for the penalties.

The world’s most expensive goalkeeper gestured to Sarri he was ready to face penalties with the showpiece locked at 0-0 and extra time about to end. But Sarri was determined to bring on Willy Caballero, who saved three spot kicks in the 2016 League Cup final while in City’s winning side. So Kepa, who joined Chelsea in August for 80 million euros (then $93 million), simply refused to leave the field.

Sarri repeatedly gestured at Kepa to come off, then began to storm down the tunnel in rage before returning to the touchline for the final minutes of extra-time and penalties.

Tha incident became viral on social media and paved way for fans to edit Wikipedia pages. In one of the pages showing the list of the managers till date, Kepa was shown as the current manager of the Stamford Bridge side. 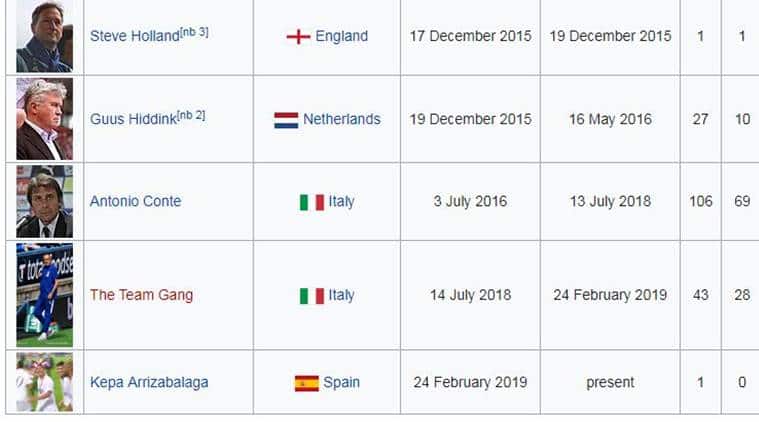 Meanwhile, another Wikipedia page labelled the 24-year-old “the most unprofessional b*****d in the world” and added: “His mum didn’t teach him any manners.” 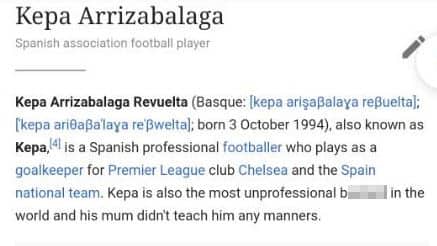 Another change said: “Kepa eventually became manager of Chelsea during the final minutes of extra time in the Carabao Cup final in 2019 and in the same match suffered his first defeat as manager.”

After the match, Kepa took to his official Twitter account to say that the incident was a big ‘misunderstand’. “At no time has it been my intention to disobey the coach or any of his decisions,” Kepa wrote in a statement issued on his Twitter feed. I think everything has been misunderstood in the heat of the final part of the match for a title. The coach thought I was not in a position to play and my intention was to express that I was in good condition to continue helping the team, while the docs that had treated me arrived at the bench to give the message. I feel the image that has been portrayed was not my intention. I have full respect for the coach and his authority.”

Sarri said after the match, “In that situation there was a big misunderstanding,” Sarri said. “I understood there was a problem and we needed a change. I didn’t find out until the doctor arrived to the bench after a few minutes.

West Indies vs England 3rd ODI Live Cricket Streaming: When and where to watch WI vs ENG 3rd ODI