Cristiano Ronaldo was left on the bench by Portugal manager Fernando Santos. 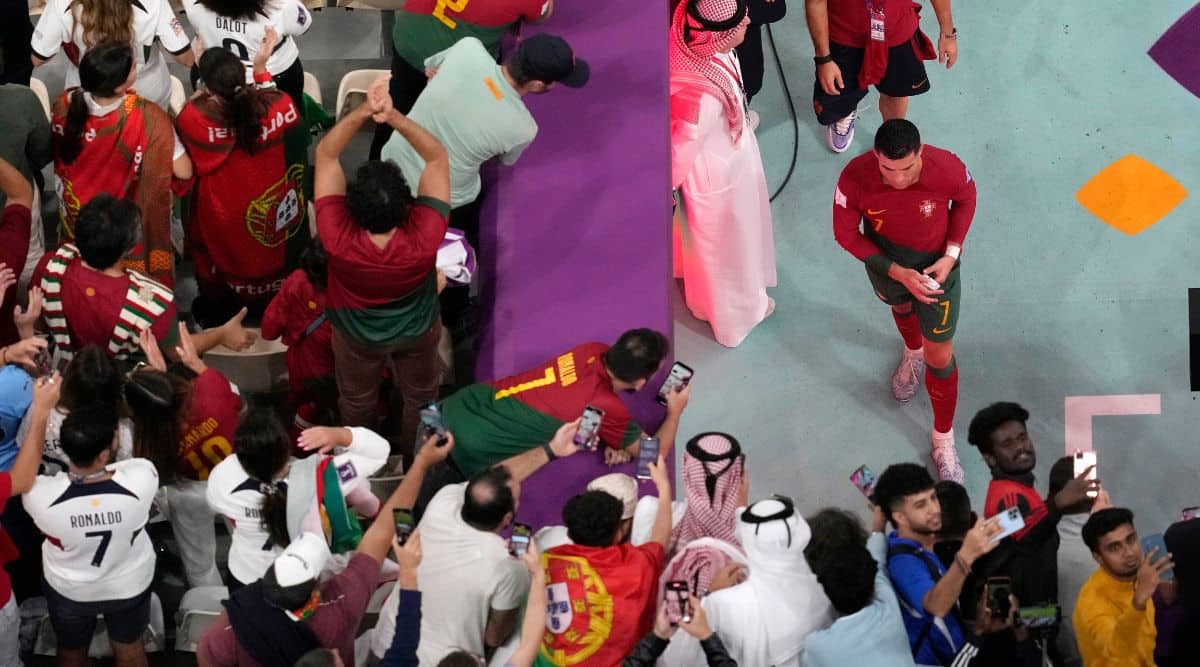 Portugal's Cristiano Ronaldo walks out from the pitch after the World Cup round of 16 soccer match between Portugal and Switzerland, at the Lusail Stadium in Lusail, Qatar. (AP)

While the rest of the Portugal team celebrated after their 6-1 win over Switzerland, Cristiano Ronaldo headed straight for the tunnel after the final whistle.

He’d come off the bench in a 6-1 victory over Switzerland on Tuesday that moved Portugal into the quarterfinals. Ronaldo’s 21-year-old replacement scored a hat trick in the win — a performance sure to raise questions over Ronaldo’s future with his national team.

Ronaldo congratulated Gonçalo Ramos at midfield at the end of the game, then walked toward the Portugal section of fans and briefly clapped in their direction.

Cristiano Ronaldo (left of picture) walks straight off while his teammates celebrate with fans. #FIFAWorldCup pic.twitter.com/W7jB6iGQOO

But as the rest of the squad made had their moment of fan appreciation, Ronaldo left his teammates behind and walked off alone through the tunnel.

Read |Cristiano Ronaldo benched against Switzerland in Round of 16 clash

Ronaldo breezed through the post-match interview area with a huge grin on his face, only responding to one question: Was he happy?

“Of course, of course,” the superstar grinned. “Portugal won.”

Fernando Santos expressed frustration with his 37-year-old star the day before he dropped Ronaldo from the starting lineup.

Santos said the decision was tactical and not disciplinary, but he’d acknowledged Monday he was bothered by Ronaldo’s poor attitude after he pulled him late in a 2-1 loss to South Korea in the final game of group play.

“I think those issues have been solved. I said that in my last press conference and I repeat myself: This is something which is finished, solved,” Santos said. “I have a very close relationship with (Ronaldo). I have known him since he was 19 years old in Sporting.

“I think Ronaldo and I never misinterpret the human and personal aspect with that of manager and player, and what we need to do during the match,” the coach added. “That is what we will do. I will always consider he is a very important player to have in the team.”

Although Ronaldo has scored in five tournaments, he has only eight goals in 20 World Cup matches. His 118 goals in international play is a world record for men, but Ronaldo has never scored in the knockout stage of the World Cup.

Daily Briefing: Winter Session of Parliament to begin today; Centre in talks with states to draw Apple facilities from China; and more