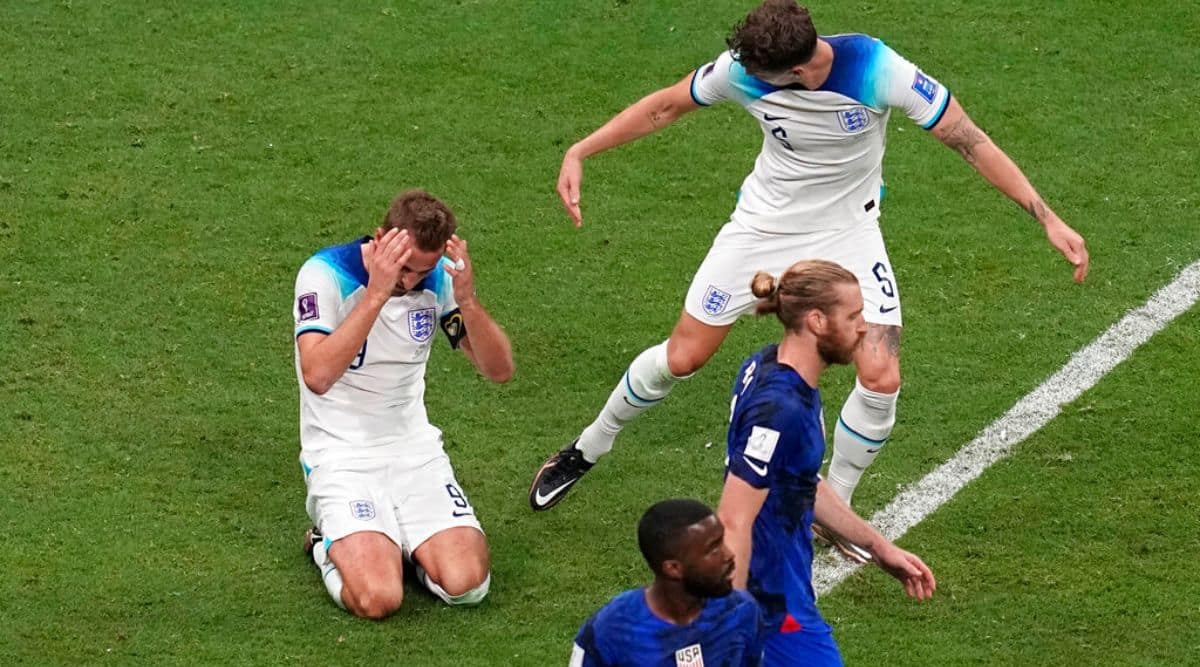 England's Harry Kane reacts after missing a chance to score during the World Cup group B soccer match between England and The United States, at the Al Bayt Stadium in Al Khor, Qatar, Friday, Nov. 25, 2022. (AP Photo/Ebrahim Noroozi)

World Cup 2022, England vs USA Football Match Highlights: England and USA shared points as they played out a 0-0 draw at the Al Bayt Stadium on Friday. Before half time, the Americans came closest to breaking the deadlock in the 33rd minute through Christian Pulisic. Pulisic’s left-foot shot from the edge of the area cannnoned off the bar as the United States enjoyed a purple patch at the end of the half. Skipper Harry Kane had England’s best chance in the 10th minute but his shot was blocked.

In the last match, Ecuador’s “Superman” captain Enner Valencia led a feisty fightback on Friday as the South Americans drew 1-1 with the Netherlands in Group A to keep both teams in the running for the last 16 while ending hosts Qatar’s chances of qualifying.  Qatar lost their second successive game at their debut World Cup earlier on Friday to Senegal and are eliminated. In the early kickoff, in what was perceived as a must win match for them, Iran beat Wales 2-0 to grab three points and rise to the second spot in Group B.

Reyna fouled. Can USA smash and grab this one? Pulisic will take the free kick. Short free kick and time has run out. The two teams share the spoils.

Free kick for England now. Can they do anything from it. Just 2 left of the added 4 mins. Shaw over the ball. It's near the left flank. Ohhhhhhhhhh!!!! Harry Kane gets a head but it's gone wide!!!!

90': Nothing comes off the corner

Corner for England now as Moore clears a lofted ball behind. Trippier to take. Maguire hets a part of his head to it but Turner has it.

A rather hopeful shot from Rashford is grasped by Turner. The move that set the shot up was prertty nice. Grealish takes a bulk of Blue shirts away with him to free up Rashford with a back heel. The Manchester city man looks to be the most creative of the English contingent.

85': Nothing from the Free Kick

England's frustrations continue as Shaw's curling free kick and cleared out by a USA head and Shaw fouls Pulisic to boot.

Substitutions for USA as Reyna and Sargeant comes on for Weah and Wright.

End to end stuff now. Henderson plays a high ball. Too high to be exact. That's claimed by Turner in the USA post. Not what they would have wanted.

Saka has been withdrawn and Rashford is on. Can he make a bit of magic for the Three Lions?

England haven't had a shot on USA's goal this half. All their attacks are getting broken down in front of a resolute defence. Kane has had just one touch in USA's penalty box all match.

End of the evening for Raheem Sterling and he will be replaced by Jack grealish. Bellingham is also going off and is replaced by Henderson.

England getting the ball into the US half now. Kane gets a ball back and plays it to Sterling whose low cross is disappointing. Gathered by the USA keeper.

62': ENG struggle to shake off USA

England can't seem to get away from USA. Wherever their players go, an USA player is there. When they try to counter, USA have a counter press ready. They need a special player to break this USA team down.

Pulisic takes a deep corner. It was coming for Zimmerman but in steps Maguire with a vital header to take it away from him. Foul on an England player now.

England keeping the ball now mostly with Kane coming deep to dicatte play. Sideways passing at the moment as some front passing is breaking down the attacks.

Saka bursts forth but he is marshalled all the way by Robinson. This is turning out to be one hell of a duel on this side. Still all square though.

49': McKennie fires one over

The second half has started cagily but USA are in the attack. John Stones blocks an initial shot and McKennie fires the rebound over the bar.

Now then. The palyers are coming out. USA first, followed by England. Can any of them break the deadlock? Let's wait and watch.

The second half has begun.

Step it up, lads! 👊 pic.twitter.com/gDKAlKQcHA

Mount!!!!!! Lovely touch first time from Sterling to feed Mount who alos hits it first time. Turner comes down quickly and makes an excellent save!!! And we go to half time.

Scoreless at the half between England and USA 👀 pic.twitter.com/wMEWHVc4Hg

Shaw with a diagonal to Kane. That has travelled..... Over the England skipper's head and claimed by the USA keeper. Next minute, Shaw makes a good run from the left and Saka gets under the ball and skies one.

That's one way of drying your palms

Weston McKennie using a photographers shirt to dry off his hand 😂 pic.twitter.com/xKpTD6GNcP

Qatar vs Senegal: Will the hosts be the first to leave the party?

Twelve years and $220 billion in the making, Qatar’s World Cup could end in the first week itself.

The small nation-state has incurred an exorbitant cost, as reported by Forbes,to host the first World Cup in the Arab world. But they could be on their way out – becoming just the second hosts, after South Africa, to be eliminated in the group stage – if they fail to get a result against Senegal on Friday.

After a build-up – including behind closed-doors friendlies that were not allowed to be recorded – shrouded in secrecy and intrigue, Felix Sanchez’s side were an unpredictable force coming into the tournament. Their players, however, failed to show up for the occasion in their underwhelming performance in the tournament opener against Ecuador. [Read More]

FIFA World Cup 2022: Learnings from the first round of matches Perhaps one of the most striking aspects of the World Cup has been the willingness of the so-called weaker teams to advance further up the pitch to win the ball in opposition territory. Arsene Wenger, FIFA’s chief of global football development, had said pressing has become “absolutely universal” across the world before the start of the World Cup. And it has been a technique that has proven useful for teams that have changed their approach to force the issue off the ball when they do not have the individual talent to compete on the ball.