Hosts first to leave party: After Netherlands-Ecuador split points, Qatar out of the World Cup

The sterile Dutch performance would have the critics sharpen their knives at Van Gaal, whose obsession with 5-3-2 is disliked and disapproved in the Netherlands for its defensive inclination. 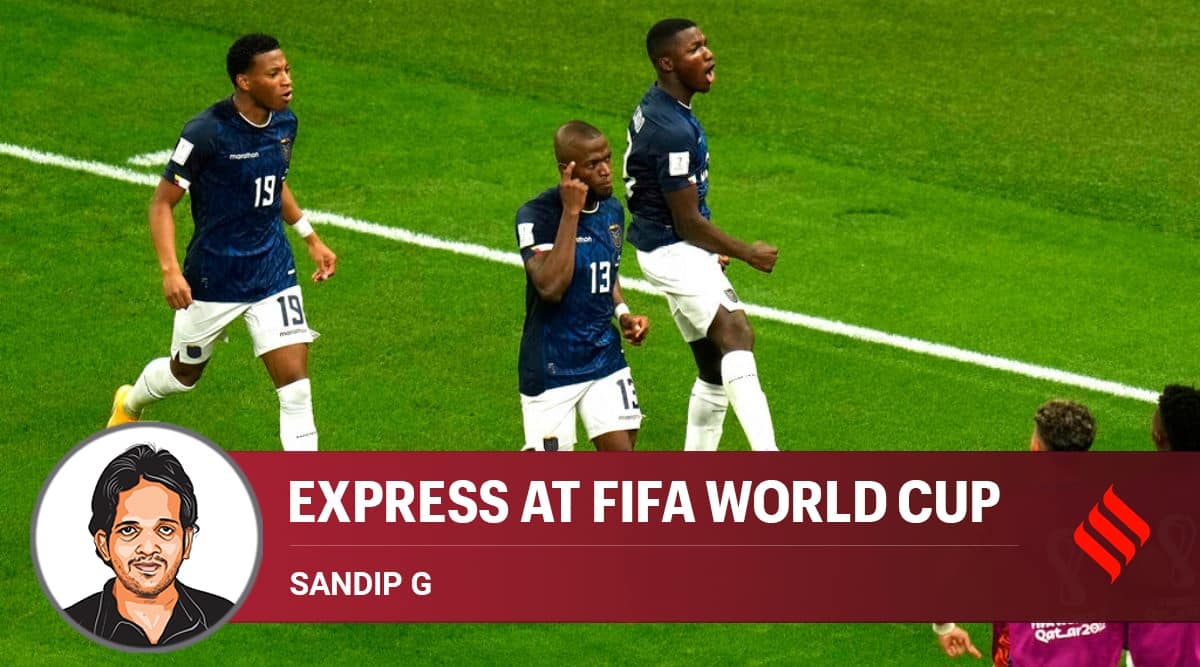 Ecuador's Enner Valencia, center, celebrates with teammates after scoring his side's first goal during the World Cup group A soccer match between the Netherlands and Ecuador, at the Khalifa International Stadium in Doha, Qatar, Friday, Nov. 25, 2022. (AP Photo/Aijaz Rahi)

Two teams locked against each other with a five-man backline is bound to produce a turgid affair, even if both have adequate attacking prowess. So it was only fathomable that the Netherlands and Ecuador produced a colourless, stifled game, in utter contrast to the vibrant colour around the stadium. Several Dutch fans had arrived in their sparkling orange thobes and keffiyeh, Ecuadorians in their flashy yellow t-shirts. Both eked out a point that saw them level with three points, but the result ended all hopes of hosts Qatar progressing to the last 16, after their defeats to Ecuador and Senegal.

Ecuador exceeded their expectations. They were to defend stoutly and counterattack. Instead, they pinned the Dutch on the mat, and but for an unfortunate off-side could have grabbed all three points. But the Dutch, who nurse title ambitions, showed neither adventure nor ambition in the 1-1 draw. The statistics portray a painful picture — the Dutch mustered just a lone shot on goal, and just one off the target. To think that they considered themselves as title-suitors baffles. In contrast, Ecuador had four shots on goal.

Even the one goal the Netherlands scored did not seem like coming. There was no foreboding of a goal, as both teams strove elusively for fluency, both teams jarred in pursuit of dominance. Passes went haywire, possession was scattered, there was no remote suggestion of a goal-bound effort, until the sixth minute when Davy Klassen latched onto a heavy touch from Ecuador’s centre-back Jackson Poroza and cutely laid off the ball for Cody Gapko, who is in sumptuous goal-scoring form. For a fleeting second, he surveyed his options, from the edge of the box and wrapped his left foot over the ball that nestled in the top corner. A classical poacher’s goal, reminiscent of his PSV Eindhoven mentor Ruud van Nistelrooy’s peak. But as much as the attributes of the strike, it was his spatial awareness that resulted in the goal. The moment Klassen reached the ball, Gapko began his run, anticipating the lay off. Klassen, who was immense, didn’t even have to track Gapko’s movement from the corner of his eyes.

Each team takes a point!@adidasfootball | #FIFAWorldCup

But the goal enlivened the match. Ecuador, hitherto blunt, opened up. A more expansive 4-1-4-1 replaced a narrow 5-4-1 and midfielders thrust upfield.

Subsequently, they carved open the Dutch defence a few times before they somehow scrambled to deprive them, hacking and shoving the ball to safety. Alarming for the Dutch was the clumsiness of Julien Timber and Nathan Ake, and often it required the expertise and heart of Virgil van Dijk to fish them out of danger. The Netherlands regained the midfield control but could not alarm the Ecuadorians, or build on their lead. Around the half-hour mark, though, Ecuador began to grow in confidence with Enner Valencia regaining his gusto. A gorgeous no-look cross found Angelo Preciado, but could impart enough power onto his shot. Valencia then crunched a net-bound drive, forcing Andries Noppert to tip the ball from danger.

The slippery Valencia was wreaking havoc on the Dutch defence, jittery and unsynchronised. He would constantly trick, tease and subdue his marker Denzel Dumfries. His night ended in agony as he was stretchered off the ground in the 89th minute. Nippy and tricky, he would throw the Dutch defence off-kilter, running past them with the swagger of a highway truck. Van Gaal’s three-man defence has worked in the past, and he has fostered a fetish for the system, but against Ecuador, it strummed only discordant chords.

An Ecuador goal seemed inevitable, and it did arrive through a corner when Pervis Espupian evaded the markers and ruffled the net. But colleague Poroza was in an off-side position, obstructing Noppert’s vision. Ecuador were devastated, but headed to the change-room having discovered multiple avenues to bother the Dutch.
But just three minutes into half-time, Valencia (who else!) equalised, after the rebound off Estupian’s low drive tricked gleefully onto the path of the Ecuadorian captain. Van Gaal summoned Memphis Depay, his most trusted forward, but still not yet hit his peak fitness, to conjure a heroic act. But nothing came to pass as both teams fought on scrappily, lacking the daring and imagination to break each other’s defensive labyrinth. The game, if any, was a tense and cagey affair, an injustice to the tremendous atmosphere the fans of both nations had produced. Not for a moment did the stadium descend to silence.

The sterile Dutch performance would have the critics sharpen their knives at Van Gaal, whose obsession with 5-3-2 is disliked and disapproved in the Netherlands for its defensive inclination. But Van Gaal has remained staunch in his conviction. “The longer I have been a coach the more I have learned to love the 5-3-2 system,” the 71-year-old said recently. “You can attack with it and you can defend with it. You can put the opponent under pressure everywhere and, if you play it well, there is less risk of the opponent breaking through on the counterattack because you have three central defenders.” But there was little evidence of the attacking dimensions of the formation on Friday.