With Germany needing a win at all costs, the two European powerhouses take each other on in a game of heightened jeopardy. 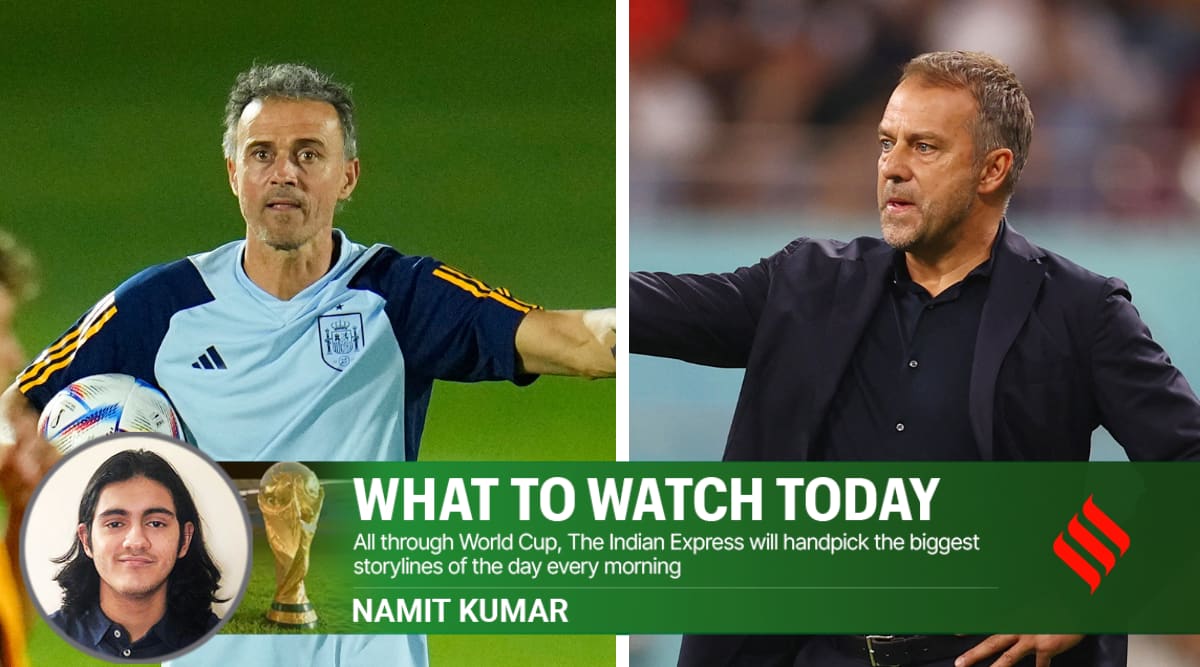 When the draw for the FIFA World Cup was confirmed in April, even a total football novice could put their finger on this fixture to be the match of the group stages.

Add to that what’s on the line. Coach Hansi Flick described the game as Germany’s “first final” of this tournament, knowing another defeat, following their shock 1-2 loss to Japan on Wednesday, would more or less guarantee their elimination at the group stage for the second consecutive World Cup for the very first time. One way or another, this promises to be an unmissable spectacle of football drama.

A generalisation of how these two teams play, both building their systems on the ‘Total Football’ philosophy of the great Netherlands sides of the 1970s and 1990s, may make it seem like they are similar in playing style. But the finer details tell a different story.

Both managers sit in their nation’s hotseat after prolific success in club football – the last two teams to win the European treble were Flick’s Bayern Munich in 2020, and Luis Enrique’s Barcelona in 2016. Having cut their cloth at the most elite level of football, both managers have tried to instil club-like tactics into their teams.

Enrique, in the job a few years longer, has seen more success with his variation, a subtle twist on the classic Spanish tiki-taka. Enrique follows the mould – a strong emphasis on being proactive rather than reactive, holding possession for long periods of time and attempting to break down defences through intricate passing patterns.

But in emphasising space in central areas, rather than relying on width for chance creation, he has prioritised technical ability in his playing squad more than anything else.

Much of the plaudits are grabbed by Barcelona duo Pedri and Gavi, the impulse to compare them to Xavi and Iniesta is evident, but both are stylistically different – better at pressing higher, less helpful defensively, yet equally helpful in breaking down opposition defences.

Spain’s approach can be very effective against teams that defend deep and try to hit on the counterattack, like many international sides do. The 7-0 thumping of Costa Rica in their campaign opener suggests that.

The real test of the effectiveness of this style as a World Cup-winning system will come against teams that close them down in the buildup and try to scramble for control themselves, and in Germany, they have a perfect match.

How is Germany different from Spain in their possession-based football?

Flick’s team is also a proponent of possession-based football, but their method of chance creation differs. Germany like to make the pitch as wide as possible when on the front foot, and overload the opposition half with bodies to win the ball back as soon as they have lost it.

They are proponents of the famed gegenpress, a system of closing down the ball with the most intensity as soon as a team loses it, to catch out the opposition at their most vulnerable.

While technically sound players are in abundance in Flick’s ranks, there is a heightened emphasis on physicality, with strong and quick players with relentless stamina to be able to produce the press, and retreat when their high defensive line is beaten. Spain, preferring to build up slowly from deep in their own half, could struggle against that German press, and could be only one individual mistake away from conceding a goal under that pressure.

Eight of Germany’s squad ply their trade at Bayern Munich and eight of Spain’s team are at Barcelona. In the last four meetings between those two teams in the Champions League, the aggregate score has been 11-0 in Bayern’s favour.

The margin for error in tournament football is finer than a needle, and no team are better aware of that than Germany, their loss to Japan came via late lapses, and some crucial mistakes in a game they largely dominated. The margins on which this match will be decided could be even finer, and even if it is the cagiest of affairs, the matchups on the pitch are likely to be intriguing enough to entertain even a novice football fan.

Why Germany needs to win the midfield battle

There is a possibility that Hansi Flick moves Joshua Kimmich, one of the best central midfielders in Europe, to right back on Sunday. The move comes from the thought process that Germany need to be more assured in the final third in wide areas, but off the ball, it could also see him move into the midfield to unsettle the Spanish midfield trio.
Both Pedri (20) and Gavi (18) are able to stitch the play in Spain’s midfield with maturity and a technical level far beyond their years. But where they struggle is in the more physical side of the game, and need to be tested by putting pressure on them when they are on the ball. Ilkay Gundogan and Kimmich are both more than capable of playing that press, but by moving Kimmich to the right and adding Leon Goretzka to the midfield, they will have enough bodies to unsettle Spain in the middle of the park. If they let Pedri and Gavi play through them down the middle, they could be in big trouble.
Additionally, by pinching balls in midfield, Germany will be able to get their attacking players into promising positions by opening up space for them higher up the pitch.