Croatia on the spot: Defeat Japan via shootouts to enter quarterfinals

1-1 at the end of the extra-time, Livakovic makes three saves as last World Cup’s finalists defeat Blue Samurai 3-1 in penalties . 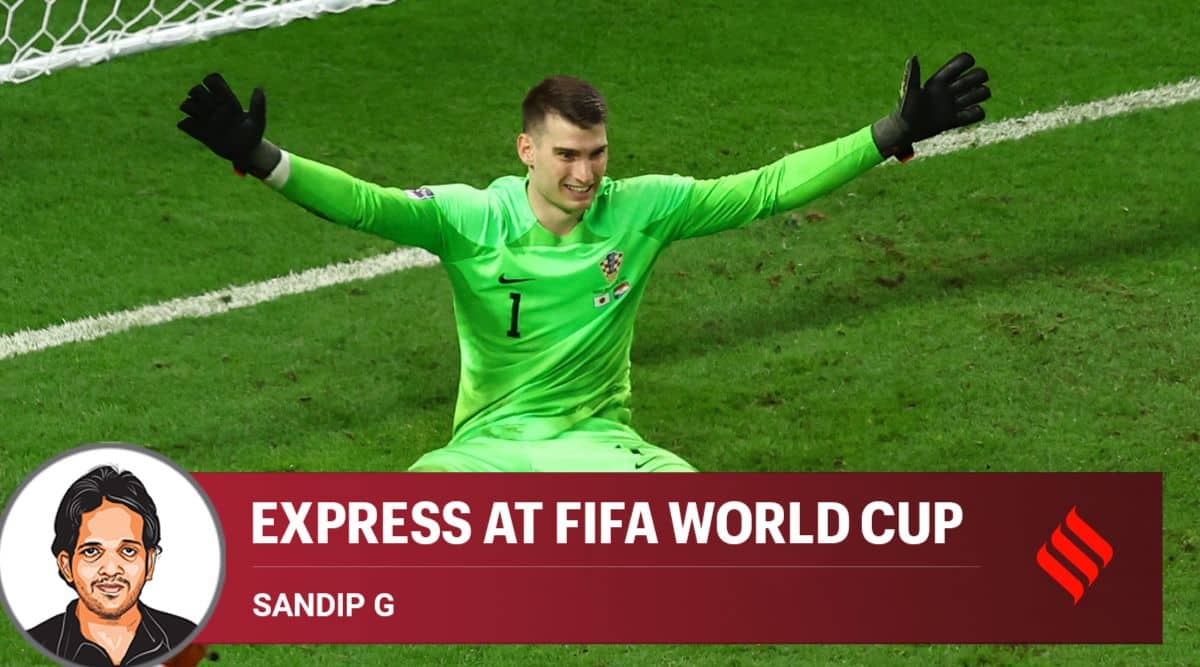 Croatia's Dominik Livakovic celebrates after saving a penalty from Japan's Maya Yoshida during the shootout. (Reuters)
Listen to this article
Croatia on the spot: Defeat Japan via shootouts to enter quarterfinals
x
00:00
1x 1.5x 1.8x

As Mario Pasalic smashed the ball past Shuichi Gonda, the Japanese goalkeeper, Dominik Livakovic wrapped his face in the gloves that did not betray him, slumped to the turf and broke down in tears. He was soon to be buried in a pile of Croatian red and white checks. When he recovered, he barely had the emotional energy to lift his arms and wave at the crowd. But he had the graciousness to search for his heartbroken Japanese counterpart, Gonda. He put an arm of consolation around him, holding his tear-washed face close to his chest. Another day, it could have been him. The unfortunate, tragic goalkeeper in a shootout.

There is often an element of fortune when it comes to shoot-outs. Weary bodies, drained mind, the queasy nerves, and the ridiculous pressure. The miasma of emotions burden the best of keepers. Look up the skies, you could see stars of destiny winking at you. Look into the eyes of your teammates, it drips with pressure. No matter how much a keeper trains, or a hitter practices, it’s all about that precise moment, when football becomes shadow boxing, when you are one on one, just 12 yards separating them. Or 12 yards separating them from glory and pain. Science or lottery, it’s the most cruel denouement to a game of football. Then, neither teams had the verve to nudge the winner in 120 minutes, when the score remained locked at 1-1

The body language of the two goalkeepers was a perceptible giveaway. Livakovic wore a bright smile, waved at a couple of fans and hopped a few times. Perhaps, it was all a mask. He might have been trembling inside. Gonda gazed nervously afar and offered a prayer into the distance. Perhaps he had a quiet Samurai calm inside him. Whatever the emotions that were churning in their head would perhaps matter little. It would all be about the moment. A goalkeeper could endure a bad day, make mistakes and still emerge victorious if the opponent striker hits the crossbar, flings the ball into the upper tiers of the stadium, or scruffs his shots. Those with a philosophical incline to the game would say it’s about luck and chance.

Read |World Cup: For Morocco, Hakim has the cure

Livakovic, if asked, would say it’s all about courage and conviction, desire and daring. Before the game, he must have pored over the pattern of the Japanese penalty-takers a hundred times over. Wake him up in his sleep and he would be able to tell who would hit where. Though nothing is certain. There are no sacrosanct rules. But Livakovic, with his wing-span of an aeroplane chose to dive to the right on three instances. And blocked thrice. This cannot be fluke or fortune. This was courage.

All the attempts were full-bloodied dives. There were no half measures. Not all were piled into his arms or body. The third one, from Japanese captain Yoshida slipped out of his hands into his midriff. It could have easily rolled over his body and into the net. But he lifted his body a fraction so that the ball did not bounce. Such awareness requires honing of skills and fine-tuned reflexes. No reputation preceded Livakovic, a goalkeeper not among the elites of the goalkeeping world and plying in Dinamo Zagreb since 2016. It was not that he was not sought, but he chose to remain there so that he could pursue his diploma in international relations.

In the team, he is called the minister because his father, a construction engineer, was a former state secretary in the ministry of sea, transport and infrastructure. As a child, he did not want to be a footballer, but a basket-baller. But he admits he was not good enough.

But even before he made those three saves, he did his best bit to keep the scoreline 1-1. Minutes into extra time, he blocked a ferocious shot from Ritsu Doan shrieking into the top corner. So powerful a shot that he removed his gloves to see if his palms were fine. Perhaps, there were signs that he was to be the hero on a day the Japanese poured their hearts out and were the better side for much of the game.

On the other hand, Croatia were largely uninspiring. Croatia’s idea-drain was perceptible throughout the game. They would run out of ideas when they reached inside the box, where they ran into a blue Japanese wall of defiance. None of them, barring the evergreen Luka Modric possessed the knack of needle-eye passing.

So they chanced their shots more from outside the box, more in hope than conviction. Invariably, it would bounce off a Japanese body. Sometimes for a corner, and on these set-pieces, invariably executed by Modric, hung their best hopes. Even the goal required a moment of brilliance rather than sustained excellence. Lovren shanked a well-weighted ball into the box for Ivan Perisic, who twisted inside his marker, and headed across Gonda into the far corner. Apart from such stray moments of brilliance, Croatia were blase and over-reliant on Modric to conjure a moment of magic.

The Japan goal, though, originated from sheer persistence. Unlike against Spain and Germany, they did not contend sitting back all the time. Even beneath their defend-first approach, there were visible signs of a progressive mindset against a Croatian side that lacked their characteristic vim and vigour. They created the better chances, they looked the more dominant side and the likelier of both sides to earn the first stripes. Daizen Maeda was all whirring limbs on the left-side, troubling Josip Juranovic with his slipperiness. Often, he would take the ball wider to the pitch, then turn inside out with a simple step-over and then cut sharply inwards, like a drunk bull. He created a brace of glorious chances, had a half chance himself that he could not sweet-spot.

But three minutes from half-time, Japan earned successive corners. The first one was a gift. An over-hit strike from Junya Ito was flying to the embrace of goalkeeper Dominik Livakovic but Juranovic interfered with a thuggish header. The ensuing corner yielded nothing fruitful, perhaps it did, as it earned the goal-winning corner. Japan went for a short corner. Ritsu Doan pinged to Hidemasa Morita, the latter slipped it back. Doan then swept a curling cross to the far post to Maya Yoshida, whose attempt was ricocheted onto the path of Maeda, who could have cursed himself for a life-time had he spilled it. He did not.

The real moment that captured their resoluteness was when Andrej Kramaric found himself, in pointblank range from the goal, but his back to the goal. But six blue shirts and the goalkeeper strangled him like a Boa Constrictor. He was locked in a labyrinth of Japanese legs and bodies. Even in that intense moment, they were wary of a stray push or kick, which could have earned a penalty.

But as is often the case, the night ended tragically for them and triumphantly for Livakovic and Croatians.