The 1-1 draw at relegation-threatened Venezia left Juventus 11 points below Serie A leaders AC Milan, who were also held at lowly Udinese 1-1. 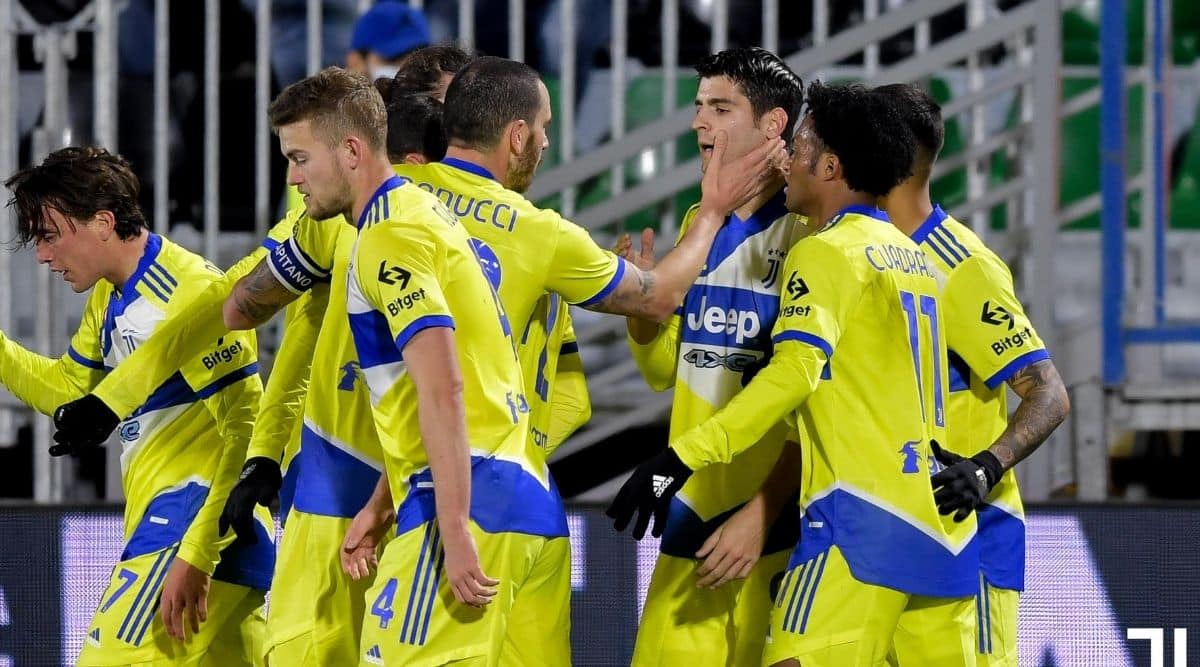 Juventus started well in Venice but took an early blow when Paulo Dybala limped off. (Twitter/JuventusFC)

Juventus’ domestic problems deepened as it was held at relegation-threatened Venezia to 1-1 in Serie A on Saturday.

Mattia Aramu scored in the second half for Venezia to cancel out Álvaro Morata’s opener.

Juventus qualified for the round of 16 of the Champions League as a group winner midweek but it has been a different story in Serie A. Saturday’s draw left Juventus 11 points below league leader AC Milan, which drew at lowly Udinese 1-1.

Juventus is also in trouble off the field as it is being investigated for false accounting. Coach Massimiliano Allegri has said he and his players were not being distracted by that.

Post-game from the Pier Luigi Penzo:

“We played well in the first half, applying ourselves tactically, creating several chances and also finding the goal. At the beginning of the second half, however, we had a blackout,” Allegri said. “I’m disappointed.

“We cannot return to Turin satisfied this evening because we have lost two more points on the road.”

The Bianconeri were six points below fourth-placed Atalanta, which had a game in hand.

Venezia inched six points above the drop zone after ending a run of three straight losses with a significant result for the promoted side.

It conceded eight goals in its past two matches and let slip a three-goal lead to lose 4-3 against Hellas Verona last weekend.

“The team responded to a difficult moment, we were coming off a hefty defeat and we responded as a team,” Venezia coach Paolo Zanetti said. “This is a golden point.”

Juventus started well in Venice but took an early blow when forward Paulo Dybala limped off injured in the 12th minute.

It took a deserved lead in the 32nd minute when Luca Pellegrini crossed in from the left for Morata to flick in at the near post. It was the young left back’s first assist for Juventus.

However, Juventus sat back too much and Venezia leveled 10 minutes into the second half as the Bianconeri failed to clear danger on the edge of the area and the ball came through to Aramu, who fired into the bottom left corner.

Minutes later, Venezia goalkeeper Sergio Romero made a fantastic save to keep out Federico Bernardeschi from close range.

Zlatan Ibrahimović prevented Milan’s week from going from bad to worse. Milan appeared to be heading for defeat in Udine until Ibrahimović netted an acrobatic equalizer in stoppage time. A cross into the area was knocked down and the veteran forward flicked it up and volleyed it in with a scissor kick.

In contrast to Juventus, the Rossoneri were looking to Serie A for relief after an early elimination from Europe midweek.

But a howler from Ismaël Bennacer allowed Beto to spring the offside trap and sprint clear towards goal. Milan goalkeeper Mike Maignan pulled off a desperate save but the ricochet off him and Fikayo Tomori fell kindly to Beto, who fired Udinese in front in the 17th minute.

Milan went close to equalizing several times, mainly thanks to impressive passes from Ibrahimović but his teammates lacked the final touch — to the Swedish forward’s clear irritation at times. Theo Hernández did have the ball in the back of the net on one such pass but it was ruled out for offside.

Defending champion Inter Milan is two points behind its city rival. Napoli is three below. They play Cagliari and Empoli respectively on Sunday.

Elsewhere, Dušan Vlahović scored two to help Fiorentina beat bottom-placed Salernitana 4-0. He has 10 goals in his past seven league matches.