Head coach Fernando Santos was rewarded for some bold call as his side defeated Switzerland 6-1. 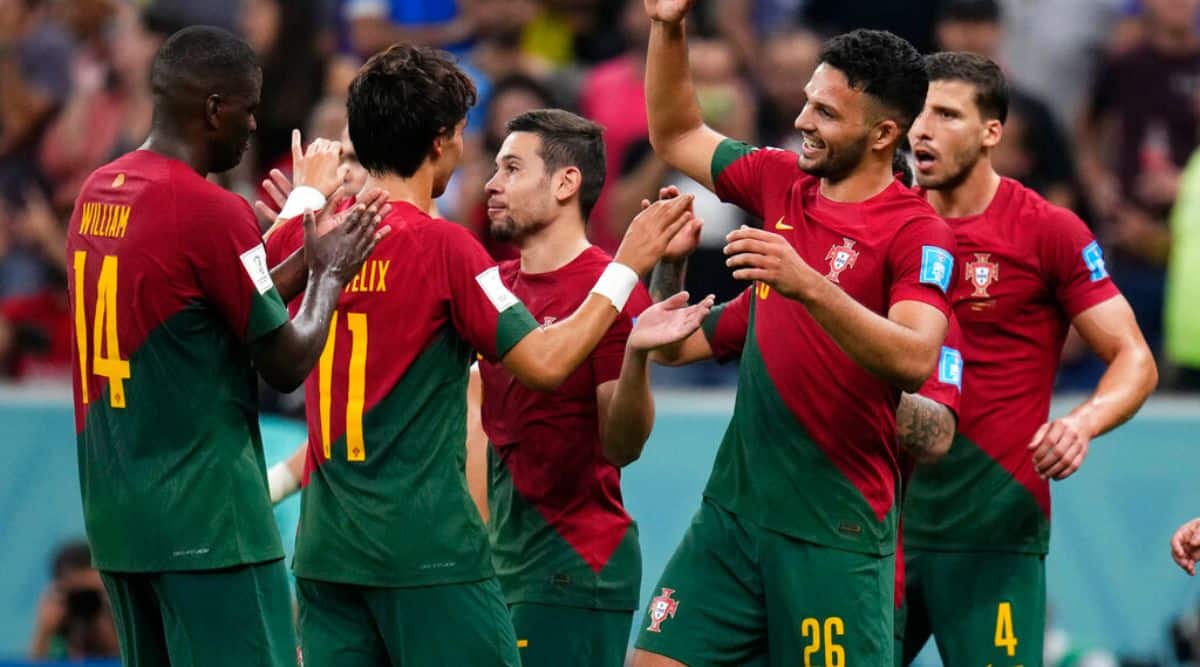 Portugal's Goncalo Ramos, second from right, celebrates with teammates after scoring his his side's fifth goal during the World Cup round of 16 soccer match between Portugal and Switzerland, at the Lusail Stadium in Lusail, Qatar, Tuesday, Dec. 6, 2022. (AP Photo/Manu Fernandez)

He had big shoes to fill. He did so emphatically.

21-year-old Goncalo Ramos replaced Cristiano Ronaldo in the starting lineup to get his first international start, and scored an outrageous hattrick of goals as Portugal smashed past Switzerland 6-1 to set up a quarterfinal with Morocco on Tuesday.

Much of the buildup to this game was dominated by the relationship between Portugal coach Fernando Santos and captain Ronaldo. The 37-year-old is the highest goalscorer in the country’s history and one of the most renowned footballers on the planet, but after a few lackluster performances in the group stage and a sour reaction after being substituted against South Korea, his place in the team had become uncertain.

There were calls to bench the superstar, but most believed Santos will take the more conservative approach and persist with the striker. Not only did he make the bold decision of benching Ronaldo, but also hooked off Joao Cancelo for Diogo Dalot in defence. And Santos was rewarded for his gutsy calls with the free-flowing manner in which his team attacked, and a plethora of goals. The forward players were able to break at pace down the central areas on the transition, and with good interplay with each other, as opposed to forcing the ball out wide and playing in crosses for their talisman.

The future is looking bright for Portugal ✨ #FIFAWorldCup | #Qatar2022 pic.twitter.com/Bd7d6r1OTM

The first goal came out of nowhere, as Ramos took a smart touch down the right-hand side of the box to play the ball into his path, and despite a tight angle, smashed the ball past Yann Sommer’s near post into the roof of the net. Moments later, Pepe leaped high and mighty to score a header off a corner and give his side a two-goal lead at half time, and at 39, becoming the second-oldest goalscorer in World Cup history.

A perfect night for Portugal!

The Round of 16 comes to a close. It’s time for the Quarter-Finals 👀 #FIFAWorldCup | @adidasfootball

Portugal came out of the break motivated to add to their tally, keeping the pressure high up the pitch. Dalot found space down the right after getting past his marker and fizzed a grounded cross, cleverly flicked between the legs of Sommer by Ramos for his second. Four minutes later Raphael Guerreiro scored their fourth, finishing emphatically after receiving the ball down the left from Ramos following a breakaway.

Manuel Akanji got Switzerland a consolation goal off a corner to make it 4-1, and the side did hold the ball for a brief period, before another breakaway led to their capitulation. Bernardo Silva’s won the ball high up the pitch which was picked up by Joao Felix – himself having a brilliant game full of dizzying dribbles, good one and two-touch passing, and two assists – whose clever through ball was met with an even cleverer finish by Ramos, dinking it over Sommer to round out his hattrick.

The boy with the world at his feet 🌏 #FIFAWorldCup | #Qatar2022 pic.twitter.com/MGacSyoi5Y

Portugal were not done yet, substitute Rafael Leao got the ball at the right edge of the box, cutting in on his right foot and curling one into the bottom corner for the goal of the day, and rounding out the 6-1 win.

On the back of the most convincing tournament win for Portugal in many years, and one of the best of the World Cup so far, Santos is likely to keep this blueprint for the rest of their campaign. Ronaldo – who got 20 minutes as a substitute but failed to make much of an impact – may have to spend some more time on the bench.

For investment, UP ministers to explore options overseas