Carles Cuadrat, head coach of Bengaluru FC feels people have to be patient with the professionals and let them work and he has no doubt that Robbie Fowler is a good professional. 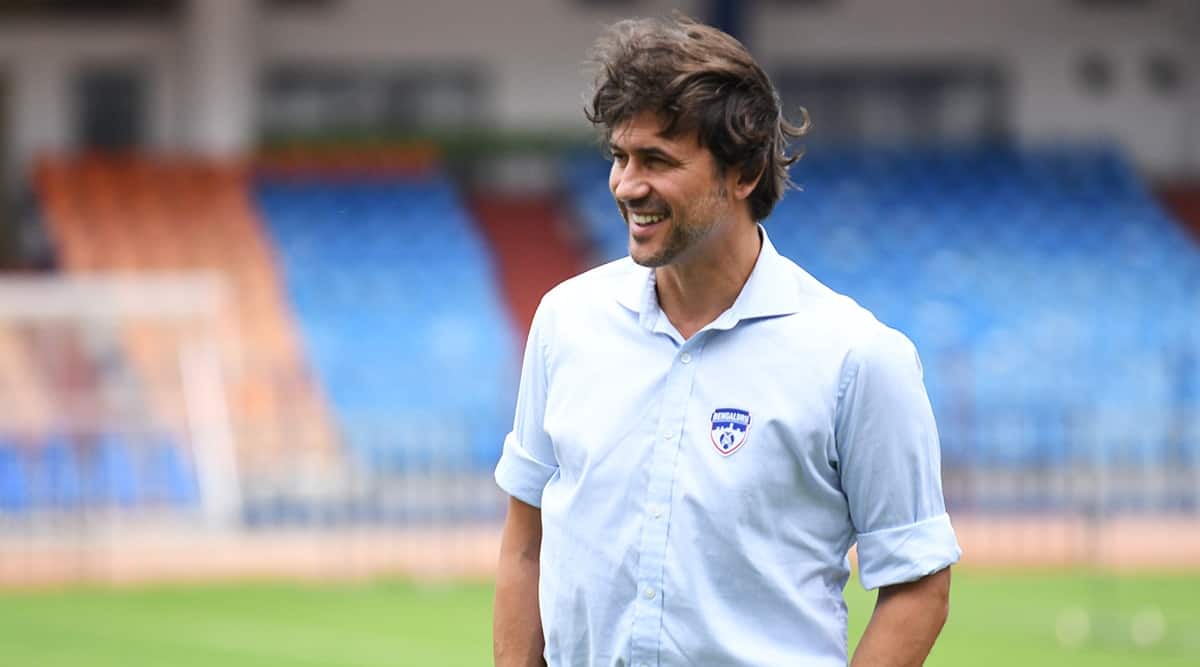 Carles Cuadrat was in his fifth season with Bengaluru FC (two as an assistant coach). (File)

His dreams might have got shattered last time against ATK, but determinations not. He loves to pursue dreams like everyone else but can not ignore the realms of reality at the same time. And to make Bengaluru FC champion again head coach Carles Cuadrat is now banking on his vast experience he gathered while working with his friend, philosopher, and guide, the legendary Frank Rijkaard. Barcelona believed in him, so did Bengaluru FC. In an exclusive chitchat with Indian Express, the beloved Spaniard shares his football journey which would eventually make him fall in love with Indian Football.

1. You are one of the most high profile and successful coaches to have coached in India. What made you come to India?

I came to the country in 2016 as trusted personnel of Albert Roca (currently Assistant Coach at FC Barcelona) and with an exciting project that allowed us to represent Indian football in Asia and win titles. We made it to the AFC Cup Final that year, and since then we’ve been able to lift 3 trophies with Bengaluru FC. The cycle has been extended by 5 seasons because the club allowed me to prove myself as Head Coach, and getting the Indian Super League 2019 confirmed that we were right in taking on the project.

2. You have worked with legendary Frank Rijkaard in Galatasaray and in Saudi Arabia. How was your coaching experience with him? How much do you relate your coaching style with his football philosophy?

I learned a lot working close to Rijkaard all through that time. Above all, to manage the day-to-day with great players (Milan Baros, Harry Kewell, Elano Blumer, Arda Turan), to withstand the pressure that’s always associated with great clubs like FC Barcelona or Galatasaray, and especially in something that later has been important in my work; become an expert in set-pieces. It was Rijkaard who asked me to take care of that aspect of the game 11 years ago, and that lengthy experience has allowed me to get a lot out of it.

3. With three wins and three draws, how would you analysis your team Bengaluru FC’s performance so far in the tournament?

We are showing that we are a consistent project. A team that has competed well for years, and that although it loses players because other teams pay more money for them (Nishu, Subashish Bose, Lenny Rodrigues, Mandar Rao), it integrates new players into their positions and continues to play entertaining football and achieves results. It isn’t easy to keep reaching the play-off stages. Big clubs in the country with massive budgets and huge fan bases have not made it to the semifinal in the last two-three years. We, at Bengaluru FC, have done it every single season and we’re working to achieve the feat for yet another season.

Read this article in Bengali here.

4. As we know Spanish coaches rely a lot on their passing style of football. But Antonio Lopez Habas seems not to play with typical Spanish style as he is making ATKMB play with counter-attacking strategy. Eelco Schattorie had earlier said to Indian Express he is more like Jose Mourinho. What’s your take on that? Do you personally know Habas?

I know Antonio Habas purely from sharing greetings during matches. I respect all the ways to play this beautiful sport. There is no formula that seems better to me than another. Your style is tailored according to the players you have and the football culture of the club you are in. It is clear that my long history of around 20 years at FC Barcelona (half as a player, half as Assistant Coach) allows me to know very well the beautiful game of ball possession and rondo, but having passed through the National Team of Arabia and El Salvador has allowed me to train in other ways of playing football in which you know that you will not be protagonist with the ball and you will have to achieve results with a good defensive structure, fast transitions and also set-pieces. I respect all the ways to get a team to compete well within the regulations.

5. As you have witnessed so far what really has gone wrong with East Bengal this season? Do you agree with their coach Robbie Fowler’s view that some Indian footballers seem not to have been coached before?

Just as I respect the way to play, I also respect the opinions of the Coaches. And if we talk about Robbie Fowler, there is no doubt about his knowledge of the game and his opinion should be heard. Football in India has very special characteristics that are not easy to perceive when you just arrive in the country. People have to be patient with the professionals and let them work. And I have no doubt that Fowler is a good professional. Just remember, without going any further, that Albert Roca’s first year at Bengaluru FC the club finished 4th in the I-League, 4th! And that team had great players like Sandesh Jhingan, Amrinder Singh, Lenny, Eugene, John Johnson, and CK Vineeth in the squad. Projects take time. We laid the foundations for the champion team that has won the titles that we have had later, yes, but that year the BFC was fourth in the I-League.

6. Which teams do you think have the best chance to qualify for the playoffs?

Teams with consolidated projects have more time to work together and to know the potential of their virtues. In this sense, there are 3 clubs that have given continuity to a good number of players and that also have coaches with the most number of matches in the ISL; ATK and BFC with the same coach and players, and curiously a totally new project, that of Mumbai City, but with many of them repeating together although in another club, since before they achieved success for Goa. The other clubs will depend more on their ability to adapt to this football from their core of foreign players and that their playing tactics work.

7. As you are quite experienced in Indian football who do you think has the potential to fill up Sunil Chhetri’s shoes?

The more we talk about seeing who will replace Sunil, the more difficult it is for potential players to fill the gap he will leave. It is very difficult to show the level of consistency that Sunil has shown competing at this height for 15 years. So far, we have seen some young forwards in Indian football showing quality details, but Sunil’s scoring numbers and his contribution to the game will be very hard to come by.