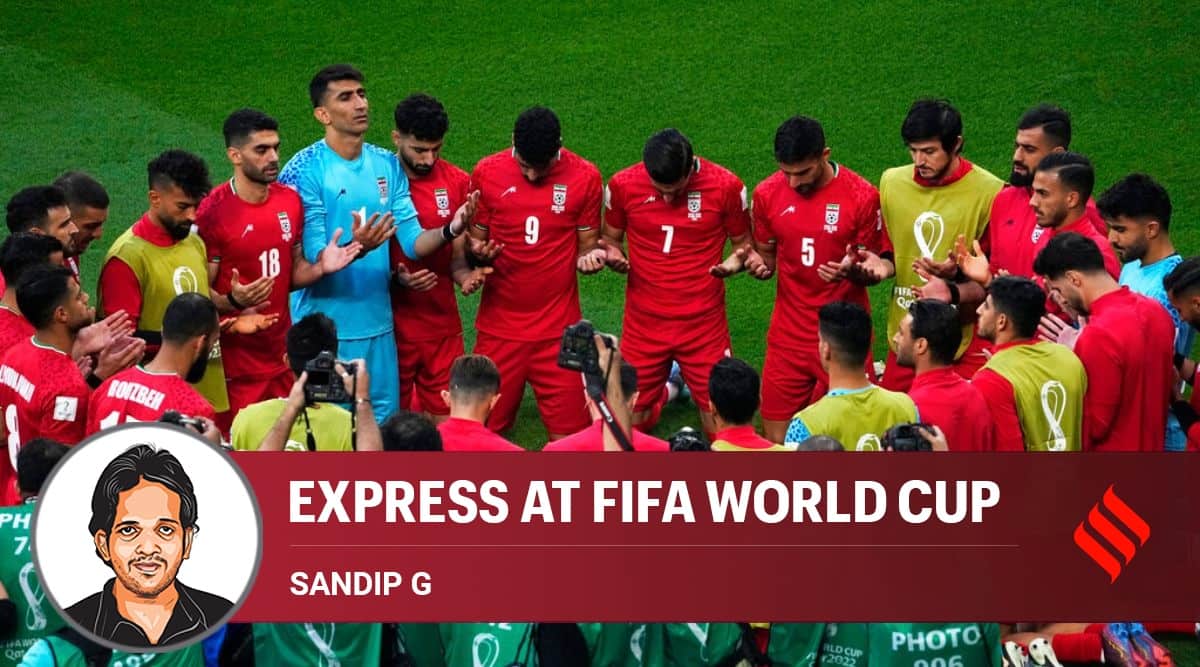 Iran's players pray ahead of the World Cup group B soccer match between England and Iran at the Khalifa International Stadium in Doha, Qatar, Monday, Nov. 21, 2022. (AP Photo/Pavel Golovkin)

AS IRAN’S national anthem rang out inside the Khalifa Stadium before the team’s opening World Cup match against England, the players stood together — in silence. Some looked down at the turf, others gazed emptily into the skies. None of them uttered a word of “Sorude Melliye Jomhuriye Eslamiye Iran”. That silence was the most powerfully eloquent statement by the entire team, as they stood in solidarity with the protests led by women back home against the ruling regime.

Many Iranian supporters, too, abstained from singing the anthem. Some booed and, reflecting the national divide, some booed those that booed. Others held aloft placards in the colours of Iran’s flag with the words: “Freedom for Iran”; “Freedom for women”; “Women. Life. Freedom.” — and, “It’s not Iran’s national team, it’s the Islamic Republic’s team”. Such was the mood that Iranian national television reportedly snapped the live telecast and resumed only for England’s “God Save The Queen”.

In fact, even before Iran’s World Cup rolled out, the predominant narrative around the team was whether the players would protest. Every time an Iranian player or the coach turned up for a media interaction, they would invariably be peppered with this question.

Coach Carlos Quieroz said he was open to players staging a protest. And defender Ehsan Hajsafi expressed sympathy for those who had died in the protests, which escalated after 22-year-old Mahsa Amini died in custody following her arrest on September 13 for “breaching the dress code” for women.

“My condolences to all the mourning families in Iran… We stand with them and share their pain… We must accept that conditions in our country are not right and our people are not happy… My people are sad and our presence here does not mean that we cannot be a voice for them or should not respect them,” Hajsafi said.

Carlos Queiroz shares his support for the Iran team and has a message for Iranian fans that do not agree with the players not singing the national anthem pic.twitter.com/CkYeHbmorM

From an Iranian fan’s perspective, meanwhile, the match was perhaps less about football. Many of the supporters had come to the stadium to show solidarity with the “struggles of the people”, rather than cheer the team. Hours before the game, outside the Sports City Metro Station that leads to the stadium, a bunch of fans, with Iranian flags draped around them and national colours smeared on their faces, were passionately chanting: “Justice for Iran, peace for Iran.” One of them, Bahman Ahmadi, said: “Our struggles, our fight, the world should listen.”

The anger was all the more because their Monday morning was ushered in with the news that the police in Iran had arrested two prominent actors who had expressed support for the protest movement and removed their headscarves in public. “With the mess in our country, we are not in a mood to enjoy a game of football. How can we when the nation is burning?” Ahmadi asked. But still, he decided to watch the match — not for the country, not for the footballers, “but for the people, to show them total support”.

Ahmadi had flown in from Abu Dhabi in the UAE, where he runs a restaurant, along with a friend, Ali Hosseini, who was tooting a horn painted in the colours of Iran. “I am not supporting the team. It’s not a team of Iranians, it’s that of the government. But if they express their solidarity with the people back home, we would support them,” said Hosseini.

The supporters were upset that the country was not unified in the “national cause”. Even the national team was divided at one point.

Sardar Azmoun, the forward, had posted on Instagram: “The ultimate [punishment] is to be kicked out of the national team, which is a small price to pay for even a single strand of Iranian women’s hair. Shame on you for easily killing the people and viva women of Iran. Long live Iranian women!”

Days later, he deleted the post, apologising for the “hasty action” that “caused my dear friends to be annoyed, and some players of the national team were insulted by users”. But Sardar’s popularity only swelled, even though he did not start the game on Monday after failing to recover fully from a knee injury.

Others like teammate Mehdi Torabi had publicly supported the regime. After scoring a goal in a club game, Torabi removed his t-shirt to reveal this message: “The only way to save the country is to obey the leader.”

In Doha, however, the team was one.

Torabi netted two goals but did not celebrate. Nor did his teammates. Not because those goals meant little in their 6-2 thrashing, but because they did not want to.

On the other side, the England players made a statement of their own, too. Before kick-off, they took the knee — the anti-racism symbol that became popular during the Black Lives movement. But Harry Kane did not wear the One Love armband after FIFA clarified that it would sanction captains with yellow cards if they wore unapproved armbands.

In the game that followed, England battered the already battered Iran, pummelling three goals in the first half itself. Iran seemed like they were sleep-running through the game, reducing the match to a sideshow, given the larger context.

Evidently, there were far more pressing concerns at the football World Cup on Monday than a game of football.