‘Normal thing to do’: Japanese fans tidy up at World Cup

The behavior is driving social media posts at the World Cup in Qatar, but it's nothing unusual for Japanese fans or players. They are simply doing what most people in Japan do — at home, at school, at work, or on streets from Tokyo to Osaka, Shizuoka to Sapporo. 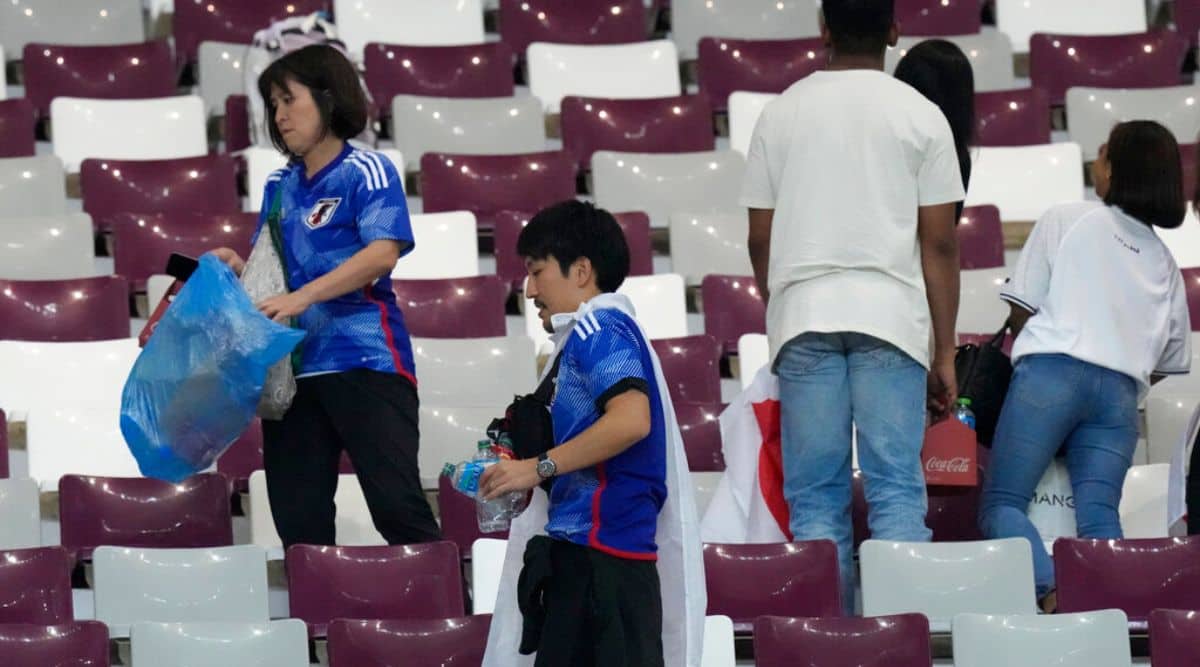 The sight of Japanese fans at a World Cup bagging trash after a match — win or lose — always surprises non-Japanese. Japanese players are famous for doing the same in their team dressing room: hanging up towels, cleaning the floor, and even leaving a thank-you note.

The behavior is driving social media posts at the World Cup in Qatar, but it’s nothing unusual for Japanese fans or players. They are simply doing what most people in Japan do — at home, at school, at work, or on streets from Tokyo to Osaka, Shizuoka to Sapporo.

“For Japanese people, this is just the normal thing to do,” Japan coach Hajime Moriyasu said. “When you leave, you have to leave a place cleaner than it was before. That’s the education we have been taught. That’s the basic culture we have. For us, it’s nothing special.”

A spokeswoman for the Japanese Football Association said it’s supplying 8,000 trash bags to help fans pick up after matches with “thank you” messages on the outside written in Arabic, Japanese, and English.

Barbara Holthus, a sociologist who has spent the last decade in Japan, said cleaning up after oneself is engrained in Japanese culture.

“You’re always supposed to take your trash home in Japan, because there are no trash cans on the street,” said Holthus, the deputy director of the German Institute for Japanese Studies. “You clean your classroom. From a very young age you learn you are responsible for the cleanliness of your own space.”

Many Japanese elementary schools don’t have janitors, so some of the clean-up work is left to the young students. Office workers often dedicate an hour to spruce up their areas.

“It’s partly cultural, but also the education structures have been training you for a long time to do that,” Holthus added.

This is Japan’s seventh straight World Cup, and their cleanliness began making news at their first World Cup in 1998 in France.

Prior to the 2020 Olympics, Tokyo Governor Yuriko Koike cautioned that visiting fans would have to learn to clean up after themselves. However, the problem never materialized after fans from abroad were banned from attending the Games because of the COVID-19 pandemic.

Tokyo has few public trash receptacles. This keeps the streets cleaner, saves municipalities the costs of emptying trash cans, and keeps away vermin.

Midori Mayama, a Japanese reporter in Qatar for the World Cup, said that fans collecting rubbish was a non-story back home.

“Nobody in Japan would report on this,” she said, noting the same clean-up happens at Japanese professional baseball games. “All of this is so normal.”

It may be normal to Japanese, but Alberto Zaccheroni, an Italian who coached Japan from 2010 to 2014, said it’s not how most teams act when they travel.

“Everywhere in the world players take their kit off and leave it on the floor in the changing room. Then the cleaning staff come and collect it,” he said. “Not the Japanese players. They put all the shorts on top of the other, all the pairs of socks and all the jerseys.”