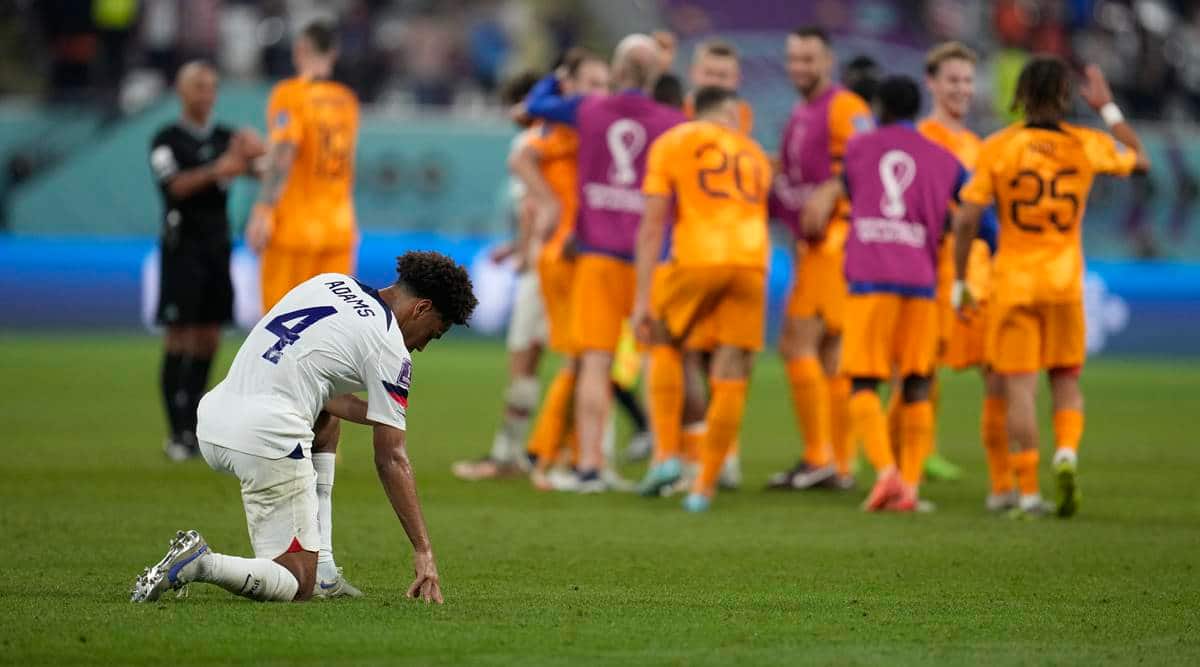 FIFA World Cup 2022 Netherlands vs USA Highlights: Netherlands became the first team to book a place in the quarter-finals of Qatar World Cup 2022 after beating the USA at the Khalifa International Stadium on Saturday. Goals from Memphis Depay and Daley Blind gave the Netherlands a 2-0 halftime lead. Haji Wright pulled one back for the US but Denzel Dumfries put the final nail in the coffin with a brilliant third goal to finish the job and put the Dutch on course for a quarter-final clash with Argentina or Australia.

A 10th-minute effort by Memphis Depay and another from Daley Blind with the last kick of the first half paved the way for the Dutch to set up a last-eight clash with either Argentina or Australia, who were playing later. Substitute Haji Wright scrambled in a reply for the United States in the 76th minute to give the Americans hope but Denzel Dumfries's volley sealed a seventh quarter-final appearance for the Dutch.

The Netherlands are through to the quarter-finals! The USMNT are out of the World Cup in the Round of 16. Denzel Dumfries put in a Man of the Match performance for the Netherlands with two assists and a spectacular volley against the USA. NED 3-1 USA

Gakpo is taken on and on comes Weghorst in his place. That means Gakpo will not be able to register four goals in four games at this World Cup.  NED 3-1 USA

Netherlands vs USA Live: 89 mins - Time to be added on

Six minutes added on. Going to have to be the longest six minutes for the Netherlands! USA are trying to create something here. NED 3-1 USA

Bergwijn keeps the ball at his feet and runs the clock down. The Dutch will be happy to do that. USA win it back and look to break but De Jong stops the move with a blatant foul. Yellow card for the foul on Pulisic. 19-year-old Xavi Simons is on to replace Depay. . NED 3-1 USA

Denzel Dumfries scores the third goal for the Netherlands from an inch-perfect cross from Daley Blind. Mind you that was not an easy finish as he took the ball on his left foot and slotted the volley home. Marking clearly appears to be a problem for USA, once again a Dutch player was left all by himself in the box. The Netherlands will breathe easy. Denzel Dumfries with a proper player-of-the-match performance! Assists and a goal. NED 3-1 USA

Haji Wright pulls one back for the USA! It was a clumsy finish but doesn't matter for USMNT. Another Pulisic assist! He always makes things happen. Can the USA find and equaliser as we head into the final ten minutes? NED 2-1 USA

Matt Turner is somehow keeping USA in the game. He makes a couple of terrific saves after Gakpo takes a shot and the rebound falls to Depay who can't convert. Wouldn't have made a difference though because it was offside. NED 2-0 USA

Time for substitutions now as USA make a couple of changes. Weah and McKennie come off and on come Aaronson and Wright. Antonee Robinson, who was injured sometime back is carrying on for now. NED 2-0 USA

Gakpo's shot falls for Memphis Depay, who shoots from outside the box, but Turner has it under control and tips it over. Meanwhile, the first card of the game goes to Teun Koopmeiners. NED 2-0 USA

The referee signals a free kick as Virgil van Dijk trips Christian Pulisic. Pulisic skipped past Van Dijk and the Dutch defender was rash in his block. Netherlands is slightly under pressure here. NED 2-0 USA

Netherlands vs USA Live: 55 mins - Robinson with a hard tackle

Antonee Robinson makes the tackle and wins possession for his team. In terms of ball possession: Netherlands are at 40 percent while USA have had 60 percent. Meanwhile, McKennie had a chance near the edge of the box but he hit over the bar. NED 2-0 USA

Netherlands vs USA Live: 51 mins - Almost an own goal

Dumfries pumps in a cross into the six-yard box and Zimmerman tries to stop it with his feet but the ball ricochets towards his own goal. But Turner saves the day. Had the Dutch got a third, this game would have been over.  NED 2-0 USA

Reyna has gone through the middle up front, with Pulisic on the left and Weah on the right. But can he get a cross? No! The Netherlands are stoic in defence. Brilliant setup by LvG. His rigid methods might be too boring for Club Football, but it’s perfect for tournaments like these. NED 2-0 USA

Netherlands vs USA Live: Muddled in the middle.

On both occasions where Netherlands have scored, its come from the USA midfield not tracking a late run into the box. For the first goal it was midfielder Tyler Adams who let Memphis Depay and even referee Wilton Sampaio to waltz past him. Depay was unmarked when he struck the ball into goal.  The same happened when left back Daley Blind scored the second for the Dutch. USA midfielder Yunus Musah should have stayed a lot more centrally in the box and allowed for his man to be guarded by Adams. Instead the USA were stuck in an ineffecient defensive formation, with Adams guarding the passing lane of Cody Gakpo, while Musah moved towards the Dutch striker. The result – Daley Blind comes in from Musah's blind spot and directs the ball into the net with almost zero resistance. - By Shashank Nair

They are 2-0 up at half time but don’t think it’s been all smooth sailing back home in Netherlands. A couple of days ago, De Telegraaf, the largest Dutch daily morning newspaper, ran the headline: “Another terrible football evening under Van Gaal” - Valentine Driesssen, the sports editor, had a right royal go.

“It's a shame to deny that beautiful and successful identity on the world stage. The excuse that such an offensive style of play is out of date does not hold. Nor that Van Gaal does not have the players for that. Everyone is used to it from childhood. Against Ecuador you saw the Dutch internationals walking around dazed and lost in the defensive system.’

'Now Van Gaal chose to persist in the ordinary counter system. Against the wishes of the internationals, Van Gaal chose to throw the Dutch football school in the trash after World Cup qualification in November 2021. The 4-3-3 system was exchanged for the much more defensive 3-4-1-2- variant (read 5-3-2 system), with which much is lost of what the Netherlands is known worldwide as a football country: offensive, attractive dominant football with a logical field occupation.”

De Telegraaf would have been pleased with the two goals so far- attacks sealed with one-touch finishes. By Sreeram Veera

The Netherlands double the lead just before the break. Heartbreak for the USA considering they’ve had a lot of the ball in the latter part of the second half. But a really good play from Dumfries, who registers a double assist. USA needs a change of strategy in the next half. NED 2-0 USA

Blind doubles the Netherlands' lead! Moments before the break, a low cross comes into the USA box from Dumfries and this time Blind comes running in and gets a first-time finish. Once again, much like the first goal, it is slotted home into the corner. NED 2-0 USA 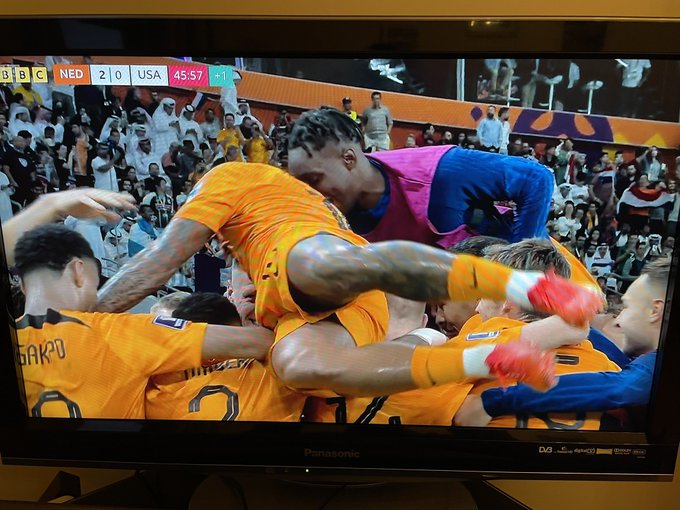 Weah makes a run down the right flank and then Pulisic looks to lay-off Robinson but it goes wide. Then Dest with a great run, gets into the box but runs out of steam and his effort is a tame one.  NED 1-0 USA

The USA enjoying more possession but they're hardly able to do anything meaningful. So many orange shirts in front of them, each one shadowing their man so closely, pressing with such high intensity that the US have no other option but play the ball all the way back to their goalkeeper and start all over again. NED 1-0 USA

Netherlands vs USA: Time for ‘soccer’ to take centrestage 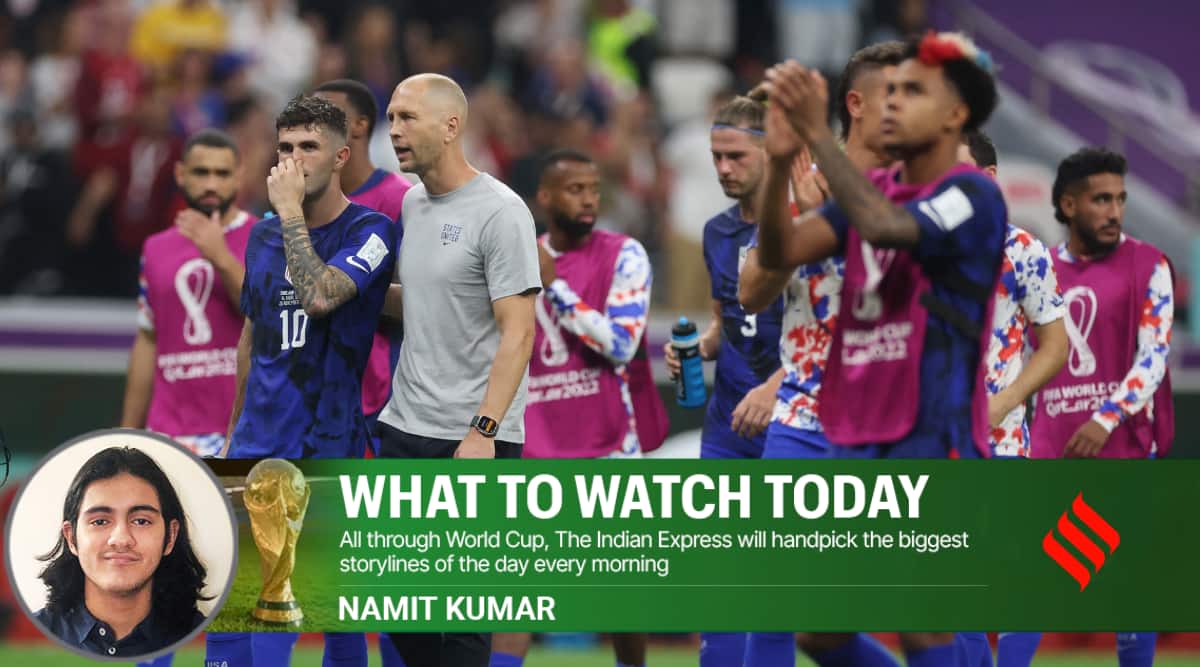 The USMNT have been quietly promising this tournament. They are yet to concede a non-penalty goal, look well-drilled in midfield, have controlled major chunks of games, and have shown bright sparks going forward.

Captain Tyler Adams has been brilliantly assured on the pitch just as he has been off it, and the likes of Weston McKennie and Timothy Weah have shown promise. Even Christian Pulisic, on the fringes at Chelsea, has looked sharp – his bravery came to the fore in getting the winner against Iran that guaranteed US progress to the knockouts. (READ MORE) Socceroos fans celebrate a goal scored by Australia as they watch Australia play Denmark in the FIFA World Cup, at Federation Square in Melbourne, Australia. (AP)

“Your tears of sadness today will be tears of joy sometime soon.”

Those were the words of former Argentina captain Diego Maradona in November 1993, on an Argentinean TV show, speaking to his Australian counterpart, Paul Wade a day after their game. Argentina had managed to win the two-legged World Cup qualifier tie 2-1 courtesy of an own goal from Alex Tobin in Buenos Aires after a 1-1 tie in Sydney. The defeat denied Australia a ticket to their second World Cup and just hours later captain Wade and assistant coach Raul Blanco were invited on a local TV show, as he recalled with the Sydney Morning Herald recently.

Everyone in the studio, who were used to watching their best football stars lead lavish lifestyles, had been taken aback when the Socceroos captain would share that earned only $5000 a season. Which is when the call came from the biggest footballer of that era, and arguably of all time. (READ MORE)