Netherlands vs Argentina: Lionel Messi has carried his side to the quarterfinals. Will his side carry him over the line now?

The 35-year-old’s glittering performances have taken the Albiceleste into the final eight. They will, however, need to be a sum of their parts if they are to go further in the tournament. 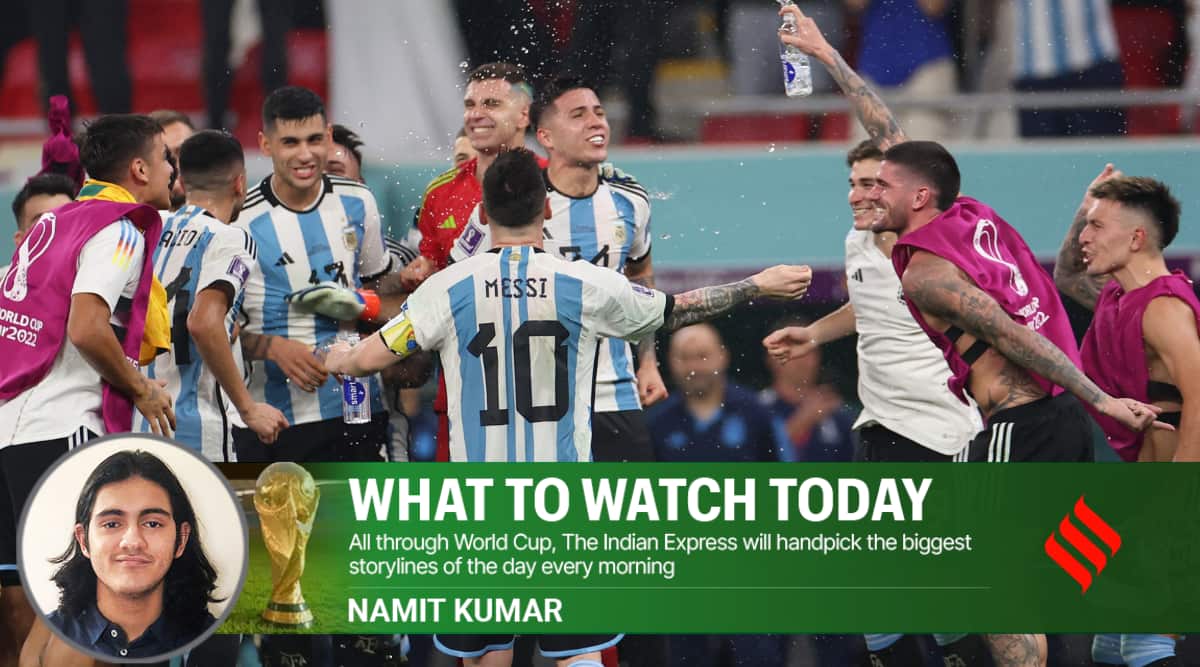 Lionel Messi with teammates celebrate after the match as Argentina progress to the quarter finals. (REUTERS/Pedro Nunes)

For a team that came into the tournament on a 36-game unbeaten run, Argentina look unusually fragile. They opened their campaign with a shock defeat to Saudi Arabia, and have looked uneasy in each of their games since, despite winning all of them.

Invariably, the main problem area seems to be their reliance on Lionel Messi. Tournament football teams are usually well-organised and structured, relying on individual talent to provide moments of brilliance. The problem for Argentina, however, is that with a Copa America triumph and a very solid build-up that led to them gaining favourite status, this is exactly what they had promised not to be. That unlike other versions of the Albiceleste, they are no longer the ‘Lionel Messi team’.

Yet, that is what they have looked like in their four games so far. They were on the verge of an early exit when Messi came up with a moment of magic in their group-stage game against Mexico, scoring a belter from outside the box. Against Poland and Australia – Messi scoring yet another hard-to-execute strike and typically making it look easy in the latter fixture – the 35-year-old was his side’s greatest creative outlet.

#10 – A selection of Lionel Messi and Diego Maradona’s stats at the World Cup. Artists. pic.twitter.com/GzHElSXpJk

He would come deep to receive the ball, spray passes into open spaces in the wide areas, drop his shoulder to beat a few players and create space, and go on a few dizzying runs with the ball. Without him, however, Lionel Scaloni’s side have shown an alarmingly low level of creativity on the ball. So much so that, if the Dutch can effectively mark Messi out of the game, on the evidence of the past four games, it seems almost impossible that Argentina will be able to create any goal threat at all.

READ |Messi, the universal language that unites the world

Their midfield lacked much control, which has been subsequently aided by the introduction of Enzo Fernandez, but Rodrigo De Paul and Alexis Mac Allister have largely played workman-like roles due to that. Papu Gomez was supposed to add a creative spark in the absence of Angel Di Maria – it says a lot that a 34-year-old is seen as so crucial by Scaloni, not only for creativity, but also energy and pace – but failed to make a mark.

Problems in attack and defence

Up front, Lautaro Martinez’s poor form would have been much more concerning had Julian Alvarez not stepped up, scoring two goals and showing energy and hunger, but not solving their creativity problem.

They don’t enforce a high press to win the ball up the pitch, don’t have midfield creativity, and don’t have a big goalscoring presence going forward. At times, their slow build-up has been so frustrating that Messi would drop all the way in front of the defence in his own half to light a spark and create something out of nothing.

Netherlands 3-1 USA: The Dutch put in a professional performance to send the USA home.

The 2010 runners-up? The Netherlands. pic.twitter.com/ZZf6GHoYG0

Even in defence, the centre-back partnership of Nicolas Otamendi and Cristian Romero has looked unconvincing, especially with Lisandro Martinez on the bench. Goalkeeper Emi Martinez has been called upon to make a few last-ditch saves, as well as bail them out of self-inflicted trouble while they play out from the back. They play very narrow, and their full-backs do not have the same incision from wide areas like other teams at this World Cup.

Yet, Argentina have won three on the trot, and in each game looked better than the previous one. As a team of fine balance, they continue to evolve positively. Given the stature of the teams they have played so far, they could afford to go through that process. Relying on one of the best players in the world, and of all time, is not the worst strategy if you are made up of a team of hard workers, if you are a team that is still finding itself.

Against Louis van Gaal’s well-drilled Netherlands, however, their World Cup dream could come to an end if they fail to be the finished product.