Diplomatic tensions, terror threats and Osama Bin Laden: As USA face Iran in the World Cup, remembering the ‘mother of all games’

During training before games, US captain Thomas Dooley says “all they spoke about was ‘when do we blow up, whether it’s now, five seconds or a minute?” 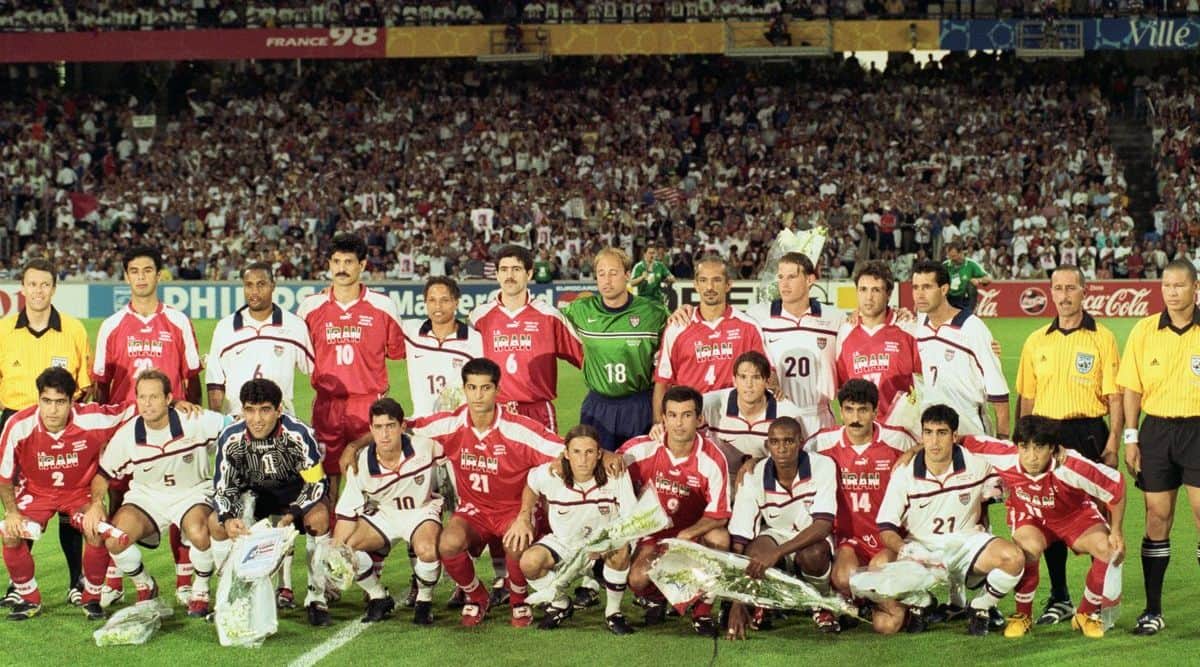 USA and Iran players pose for a Group photo before their World Cup match in 1998. (Source: Twitter)

Hank Steinbrecher was on a bullet train from Marseille to Paris when he got a call from the White House. “We are going to win this game, aren’t we?” the voice on the other side asked Steinbrecher, then US Soccer Federation’s general secretary. It was 1998. “The news is going around the world.”

Mohammad Khakpour, too, received a call; not from a high-ranking government official but from the family members of those who had lost their children in the war between Iran and Iraq. “Fathers, mothers called and said this game really does matter to us,” the former Iran defender says in the BBC documentary, ‘The Great Game’. “You have to go and win this game for us.”

On paper, it was merely a group-stage match of the World Cup between two teams that had lost their opening matches. But a meeting between two nations who had severed diplomatic relations in 1980 was always going to be much more than a mere game of football.

“Others,” the Iran coach Jalal Talebi says in the documentary, “called it ‘the mother of all games’ and the ‘match of the century’.” Or, ‘the Great Satan’ taking on ‘the Axis of Evil’.

As the United States and Iran prepare to face each other in a winner-takes-all Group B match in Doha on Tuesday (12.30 am, Wednesday, IST), the backdrop won’t be as politically-charged as it was when the two teams met the last time – which was also their first meeting – back in 1998.

The fire, though, has been lit. Iran is witnessing mass protests since 22-year-old Mahsa Amini died in police custody in September for allegedly violating the country’s hijab laws. Hundreds, according to media reports, of protestors have since died. There have been demonstrations in the stands in Qatar and on the field, the Iranian football team, as a show of solidarity to the protestors, refused to sing the national anthem during their first match of the World Cup.

Then, to further heighten the tensions, the US Soccer Federation removed the emblem from the Iran flag to show its support to the protestors. In retaliation, the Iranians want the USA banned for 10 games, citing FIFA’s rules, for ‘offending the country’s dignity’.

In midst of all this, it’s easy to forget what’s at stake for both teams: a spot in the Round of 16 of the World Cup.

And yet, the drama is nowhere close to the tensions leading up to their first encounter, 14 years ago.

When the US and Iran faced each other in Lyon during the 1998 World Cup, the circumstances were vastly different. In Iran, students had held more than 50 US citizens hostage for more than a year following the 1979 revolution, which forced the country’s leader Mohammad Reza Shah, seen as a US ally, into exile. Ayatollah Khomeini, seen as an anti-US figure, came into power.

The relations further soured when the US backed Saddam Hussein’s invasion of Iran in 1980, a war that lasted nearly a decade and left, according to Time magazine, ‘at least an estimated 500,000 dead.’

“The Iranian players were aware that the hopes of the country were on them,” Khakpour says in the BBC documentary. “Just imagine being told for six months that this is the most important game in our history,” Talebi adds.

Iran Vs USA 1998, one of the greatest moments in World Cup history. A moment so important it was preceded by an address from the POTUS Bill Clinton.

I cried watching that game and I still well up thinking about it. pic.twitter.com/FfzeS1GIR2

There wasn’t the same level of understanding of the historical context among the American players. In the podcast American Fiasco, an archival clip is played of a reporter asking forward Eric Wynalda about the hostage crisis. “What year was it in?” Wynalda asks, sounding clueless.

But it was apparent to him, and his teammates, that this was much more than football. Twelve days before the World Cup was to begin, on June 10, 1998, the Los Angeles Times reported that a plot to attack the American and English teams during the tournament was uncovered following coordinated police raids in ‘France, Belgium, Italy, Germany and Switzerland’.

One of the targets, the reports added, was the USA’s training base just outside Paris. “We had high security. Osama bin Laden was trying to do something to the team, blow up the team or something like that,” then USA captain Thomas Dooley says in the BBC documentary, adding that security helicopters hovered over the camp and ‘police with machine guns hid behind the trees’ outside their facility.

Dooley said when the team was on the train for their opening match against Germany, all they spoke about was ‘when do we blow up, whether it’s now, five seconds or a minute? It’s constantly thinking about that kind of stuff.’

The US lost their opener. It was a significant result because this was an era when US soccer was on an upswing following the launch of the MLS and the hosting of the World Cup in 1994. On the other hand, Iran, who suffered a defeat at the hands of Brazil in their first match, were returning to the World Cup for the first time since 1978, which was a winless campaign.

Refusal to walk up to Team USA

So, for both teams, a win was essential to stay alive in the tournament. The match was to be played on June 21, 1998, at Lyon’s Stade Gerland.

On the match eve, Steinbrecher got that call from the White House, according to the podcast American Fiasco. But a more pressing issue cropped up during the manager’s meeting a day before.

Iran, who were designated as the away team for the tie, had to walk up to the US after the anthems were played and shake hands with the players, as per FIFA’s protocols. However, the country’s establishment felt that it could be seen as a ‘weakness’ and refused to oblige. The USA offered to walk up to the Iranian players but FIFA, citing rules, did not allow that.

The stalemate was ended by Swiss referee Urs Meir, who was to officiate in that match. Since June 21 was the ‘Fairplay Day’, he suggested a group photo of both teams, which wouldn’t require one team walking up to another. Hands were shaken and a diplomatic storm was averted.

But another problem awaited the officials.

It was suspected that Mojahedin Khalq, an Iranian political opposition group, were planning to disrupt the match. And so, the match between two geopolitical rivals kicked off with around 150 armed policemen surrounding the stands.

Eventually, the match began in front of nearly 40,000 people with pleasantries with Iranian players handing their American counterparts white roses, seen as a symbol of peace.

It was a high-octane affair that saw the US making all the early moves, totally dominating Iran and hitting the woodwork a couple of times. Iran endured the early US pressure and gradually began to assert themselves before giving a master class in counterattacks.

They were denied a controversial penalty – and a possible red card to the US goalkeeper – but the Asians outwitted their rivals, scoring two goals – the first by Hamid Estili in the 40th minute and the second by Mehdi Mahdavikia in the 84th – a blazing run down the left wing, one-on-one with the goalkeeper and calmly finding the far post; a remarkable achievement for a player who had lost the ability to walk as a child due to a medical condition.

The US pulled one back through Brian McBride with three minutes remaining but Iran hung on for a win. The result condemned the US to a humiliating first-round exit while ensuring Iran’s first-ever World Cup win.

At the end of the game, when asked by ESPN whether he was going to resign, the US coach Steve Samson would deflect it saying it was up to the federation. But as soon as he found a personal space, he broke down. “I broke down emotionally and I literally cried, away from the team. I knew in that moment that we were done,” he told the ‘American Fiasco’ podcast.

In Tehran, tens of thousands poured on to the streets to celebrate in unearthly early morning hours. The BBC would report that followers of Hezbollah fired shots into Beirut air, and shouted, “Death to America”.

If they win the rematch on Tuesday, Iran will once again eliminate the US from the World Cup while making it past the group stage for the first time ever. History awaits; will the US rewrite it or Iran repeat it?

Rahul on Rahul: ‘I let go of Rahul Gandhi years ago … He is in your mind, not mine’