In an ill-tempered tie, Argentina win via tie-breaker after Messi's pass of the tournament, Wout Weghorst's brace for the Dutch and Emi Martinez's heroics in shootout; will face Croatia in semifinals. 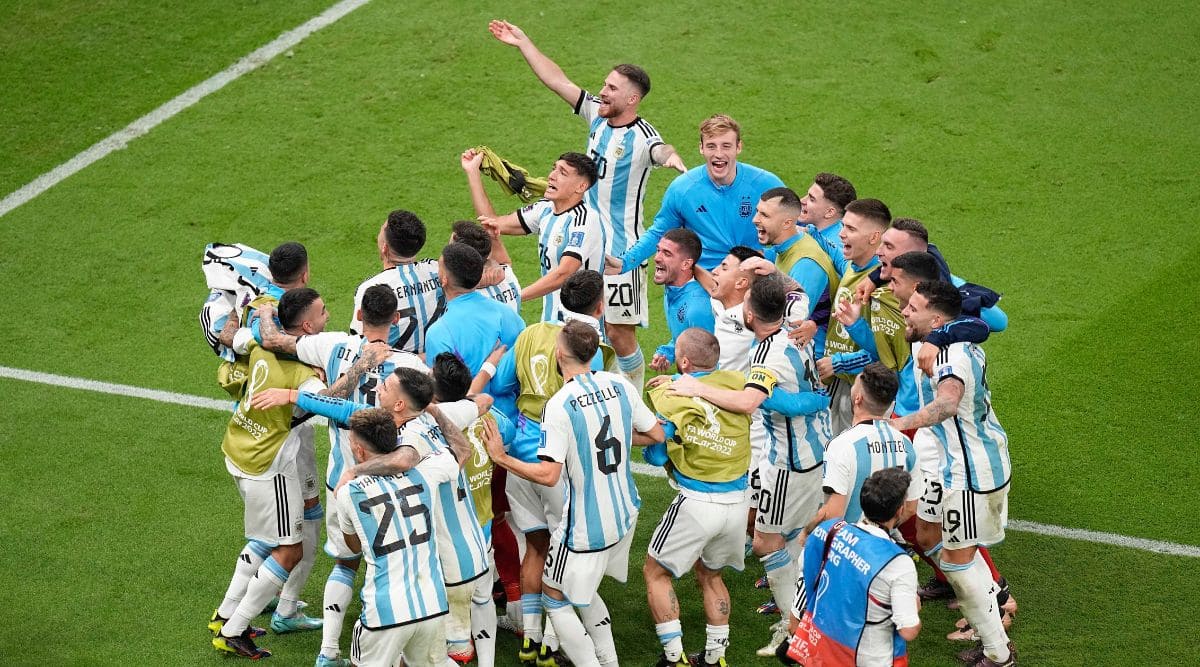 Argentina players celebrate at the end of the World Cup quarterfinal soccer match between the Netherlands and Argentina, at the Lusail Stadium in Lusail, Qatar, Saturday, Dec. 10, 2022. (AP)

Argentina and Netherlands began their World Cup quarterfinal on December 9 at the Lusail Stadium in Doha. By the time the brawl was settled and the players walked off the pitch, it was December 10.

In the intervening moments of this World Cup classic, there were 17 yellow cards, a Messi assist for the ages, a creative Dutch free-kick in the 100th minute to force extra time, which wasn’t enough to separate the two royalties of international football.

Ultimately, after the scores were level at 2-2 following extra time, Argentina prevailed in the penalty shootout 4-3. And Messi’s dream to win the World Cup lived on. Goalkeeper Emi Martinez ensured that with spectacular saves in a tense tie-breaker.

In regulation time, it was Messi who’d carried the team on his shoulders.

Argentina’s tactic in most of their games seems pass the ball to Messi and pray he can work his magic. Throughout his career, the 35-year-old has done that and a lot more.

All of the emotions… pic.twitter.com/55zBVmMf9h

On Friday, he put on a show once again.

The moment of magic came in the 35th minute. The Argentina number 10 received a pass from Nahuel Molina, who was deployed as a winger on the right flank after coach Lionel Scaloni’s tweaked formation. Molina continued his run towards the Dutch goal but Messi, it seemed, had few passing options.

Around 35 yards from the goal, Messi was surrounded by four players – one in front, who constantly shadowed him; one each on the left and right to close his angles; and the fourth closing in from behind. Ahead of him, Molina had run into a tiny pocket at the edge of the box but he too was surrounded by two defenders.

Despite no space to work with, Messi looked up with the corner of his eyes to spot Molina and cut the ball inside so delicately between two of the best defenders, Virgil van Dijk and Danny Blind, to put Molina through on goal. Molina did well to control the ball and despatch it past the goalkeeper to score his first goal for Argentina.

“A goal of sumptuous geometry. Messi seems to find an angle that doesn’t exist to create that pass,” commentator Peter Drury screamed, one of many who couldn’t mask their astonishment and hailed it as the ‘pass of the tournament.’

It was unreal vision and execution, especially since the Netherlands did nothing wrong there. The defence was compact, there were players closing down Messi. Yet, they were unable to stop him.

In the second half, Messi got his name on the scoresheet as he confidently converted a penalty – having missed once already in the World Cup – to give Aegentina a 2-0 lead.

Also Read |Modric, the mastermind while Marquinhos misses as Brazil sent out of the World Cup on penalties by Croatia

The scoreline seemed like a vindication for coach Lionel Scaloni’s strategy, after he changed his preferred 4-3-3 formation and start with a 3-5-2 to match Netherlands’s system. In doing so, the plan was to ensure the Dutch wouldn’t stifle them in the centre of the field, make sure Messi doesn’t have to drop too deep to receive the ball, and trigger fascinating 1v1 duels between the wingers, given the natural width on offer for both teams.

Wout Weghorst’s brace – including the equalising goal in the 100th minute from a cheeky free-kick routine – did give them a scare.

But at the end of an epic night, it was Messi who left the stadium smiling. He dictated play, pirouetted past defenders, came close to scoring from a free-kick, was successful from the spot – twice – and even got booked for a foul but it’ll be that pass that’ll be remembered for the years to come.