What makes this win all the more special for Argentina's number 10 is that the last La Finallisima holder was another Argentina number 10, one Diego Maradona. 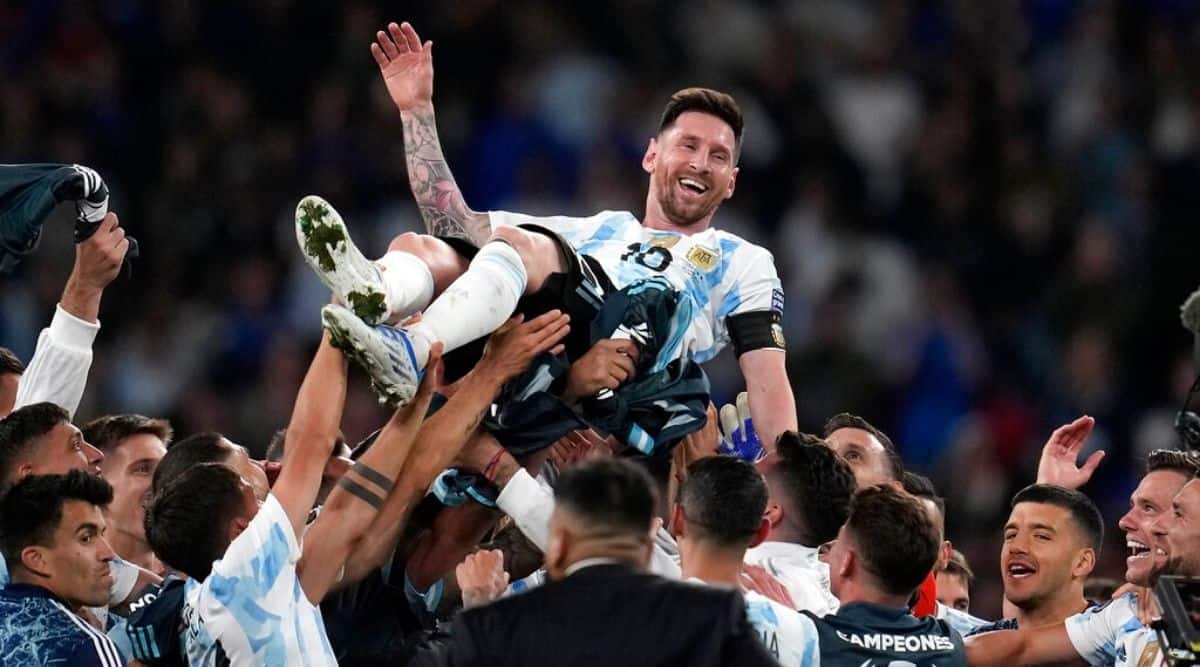 Powered by Lionel Messi’s dazzling football in front of a packed crowd at the Wembley Stadium, Argentina men’s national team celebrated a 3-0 thumping of Italy to claim La Finalissima.

The seven-time Ballon d’Or winner lifted his second international trophy with Argentina in 11 months. What makes this win all the more special for Argentina’s number 10 is that the last La Finallisima holder was another Argentina number 10, one Diego Maradona.

Messi receiving the Man of the Match award of La Finalissima pic.twitter.com/Cgkd1XjUWi

The 34-year old has now made 46 goal contributions in the 45 finals that he has played in his career. And judging by the two assists that he recorded on his record-extending 161st Argentina appearance last night, there is no sign of Messi slowing down with the chance to win a first World Cup title later this year.

“What we experienced here was beautiful,” Messi said. “We knew it was going to be a nice game and a nice setting in which to be champions.”

Argentina’s Lionel Messi holds a trophy as he celebrates with his teammates after winning the Finalissima match between Italy and Argentina at Wembley Stadium in London , Wednesday, June 1, 2022. Argentina won 3-0. (AP photo/Frank Augstein)

Lautaro Martinez opened the scoring on the night after Messi had made a brilliant solo run on the left taking him past Giovanni Di Lorenzo, leaving his teammate with only the tap-in formality to make it 1-0 in the 28th minute.

Martínez then turned creator in the dying seconds of the first-half as he threaded a through ball for Ángel Di María, who chipped it past Gianluigi Donnarumma to double Argentina’s lead having left behind Giorgio Chiellini in the process. The 37-year old Italy captain made his last appearance for his country, signing off with a 117 caps.

The win was wrapped up with only seconds left to play on the night as Messi gained possession on the halfway line and rampaged to the edge of the penalty area, evading Di Lorenzo’s challenge to set up substitute Paulo Dybala, who struck it to low into the net.

It was a second trophy lift at Wembley for Messi, who had won the Champions League Final here with Barcelona in 2011, beating Manchester United 3-1 and putting in another player of the match performance. The celebrations for La Albiceleste were not so different as they threw their captain in the air, forming a huddle around him. Same as they did after their Copa America win last year in Brazil.

It was a painful return for the Italians to Wembley Stadium, who’d won their Euro title last year on the same turf. The Azzuri will miss playing at the World Cup for the second successive time.

Argentina on the other hand will head to Qatar in November with another trophy — one created as part of a UEFA-CONMEBOL partnership that challenges the global supremacy of FIFA.

The choice of London as the venue for the game stood right as 87,000 packed the arena with UEFA picking the stadium despite the unrest caused by the local fans at the Euro 2020 final.