‘Lionel Messi is number one’: Ronaldo snubs Cristiano in his top-five list

Ronaldo Nazário, the two-time Ballon d'Or winner, picked Lionel Messi as the best player in the world, and included the likes of Mohamed Salah, Eden Hazard, Neymar, and Kylian Mbappe in his list. 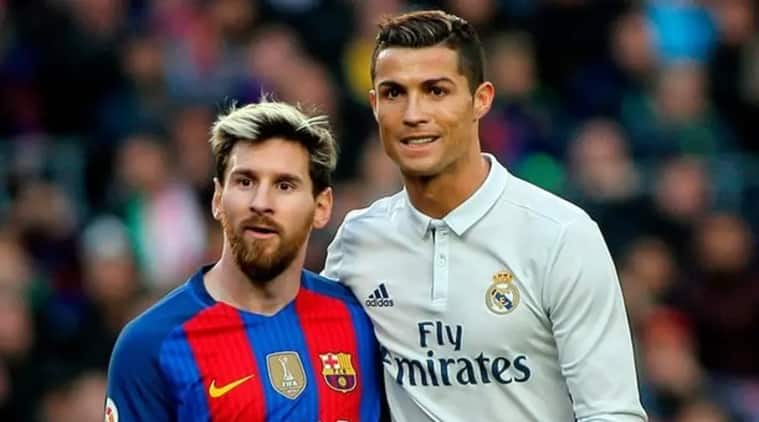 Lionel Messi with Cristiano Ronaldo in an El Clasico in 2017. (Source: File Photo)

The 43-year-old is himself a two-time Ballon d’Or winner and unlike the mercurial talents like Messi or Ronaldo, he has won not one, but two World Cups with Brazil during his playing career. His say does have weight to it.

The former Barcelona forward has always claimed that the left-footed Argentine is one of the finest to have ever graced the game, and he reiterated that again in an interview with AS on Monday.

“Messi, of course, he is number one, he is a talent that means it will take 20 or 30 years to see something similar,” said Ronaldo while mentioning his choices which also included Liverpool, Real Madrid, and Paris Saint-Germain stars.

“I also like Mohamed Salah, Eden Hazard… Neymar, I love watching him play, and of course, Kylian Mbappe.”

READ | ‘Ronaldo is the best of all time, not Cristiano or Messi’: Roberto Carlos

PSG’s Mbappe, who won Ligue 1’s Golden Boot this season, has been likened to Ronaldo, and the ex-Inter and Real Madrid striker said that he knows exactly why.

“Many people say that he [Mbappe] looks like me. He has a lot of speed, he finishes well, he has great movement, he shoots really well with both feet, he has an incredible stride,” said Ronaldo.

“We have similar attributes, but I never liked the comparisons, especially between players of different generations, because the situations are different.”

While comparing the talents of Salah, Neymar, and Mbappe, who all ply their trade in England and France, Ronaldo indicated that he considers La Liga to be the best league in the world.

“It is not clear that the Premier League is better than our league. Perhaps in television income, the clubs receive more, but the best players are in Spain, or at least, most of them,” said Ronaldo, who owns a majority stake in La Liga club Real Valladolid.

After Bundesliga restarted its season, La Liga is now set to resume on June 11 when Sevilla will play Real Betis. Premier League will also restart on June 17.