Two of a kind: How Virat Kohli is so Ronaldo and Ronaldo is so Virat Kohli

Ageing super athletes like Virat Kohli and Cristiano Ronaldo are the proud peacocks of the garden, not those nervy house sparrows. They can be down but can't be written off. 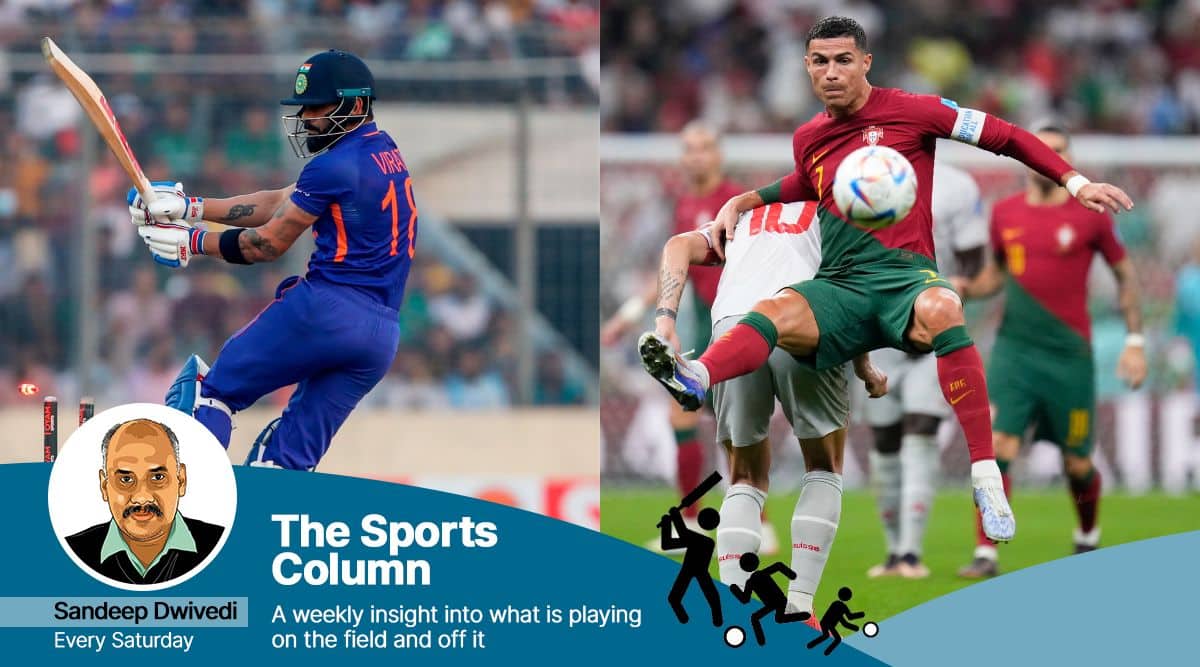 India's Virat Kohli is bowled by Bangladesh's Ebadot Hossain during the second ODI; Portugal's Cristiano Ronaldo battles for the ball. (AP)
Listen to this article
Two of a kind: How Virat Kohli is so Ronaldo and Ronaldo is so Virat Kohli
x
00:00
1x 1.5x 1.8x

Virat Kohli has often said how he and his ultimate sporting hero Cristiano Ronaldo have a lot in common. By his own admission, both aren’t naturally-gifted, say like a Messi, but it’s only through hard work that they have stayed at the top of their sport. Kohli has also mentioned how Ronaldo gets “targeted on a daily basis but has the mental strength, the will to work hard and the desire to keep coming back”.

Of late, more similarities have sprouted. A year back, it was at Abu Dhabi, an angst-ridden Kohli was replaced by his long-time team mate Rohit Sharma as India’s skipper at the T20 World Cup. This week, along the same Arabian Peninsula in Qatar, Ronaldo had reluctantly handed over the captain’s armband to his old pal Pepe. It wasn’t a coincidence that the men, who made wearing the heart on the sleeve fashionable, had looked sullen after the snub. It is never pleasant to watch the usually energetic and enthusiastic wear a glum look, silently nursing their amputated spirit.

Kohli, after the 2021 setback, would regather himself. He would take a break, confess to faking intensity and play his most memorable T20 innings in the 2022 World Cup against Pakistan. Ronaldo, three year older than Kohli at 37, doesn’t have that luxury or the time. He can’t take a break or unburden his mind. This is the football World Cup.

Days after he was benched in the last 16 knock-out game against Switzerland, Ronaldo could well be playing his last game on the grand stage. Footballing logic, and his replacement and heir apparent Goncalo Ramos’s hat-trick, shouts out in chorus – Ronaldo shouldn’t start against Morocco in the quarters too. For the second successive game, the five-time Ballon d’Or winner could end up in the water boy uniform – yellow FIFA bib that hides the country colours.

Being an ‘extra’ is excruciating. Players left out of playing XIs speak about being anxious, trying to catch the coach’s attention, waiting for the signal to start warming up. All for that ultimate kick – World Cup game-time. Those confined beyond the boundary rope also say how the mind too starts playing tricks. Somewhere deep inside you wish your mates would fumble. Having worked and dreamt to be on the field for a World Cup game, it’s human to be desperate for action on the field.

If you are Ronaldo, or Kohli, it gets tougher. There’s the unwavering camera-gaze, relaying very close-up to the voyueristic world outside the stadium. The frames work as exhibits for amateur psycho-analysis. The visuals come handy to those reporting wanting to add colour to the hastily written match reports or character sketches. Like the other day, when Ronaldo was in the dug-out. He didn’t look happy when Ramos scored. He stood up and applauded when Pepe headed the ball into the net. These threads were used, to weave stories.

To be pushed to the sidelines at the World Cup is painful for every player but for the likes of Ronaldo and Kohli the hurt is far more. It’s because two of the fittest players in their sport have sweated and sacrificed much more than the rest. They have made impossibly tough lifestyle changes, spending those extra hours in the gym to avail peak fitness. And once there, they run the extra mile, make it a marathon, and lift additional weights to remain in shape.

At 13, Ronaldo was told he was talented but too skinny. He took it to heart and transformed himself into a Greek God sculpture. Not overly modest, both Ronaldo and Kohli don’t miss a chance to talk about their ‘six pack’ commitments. Kohli has revealed how he would want to chew up the bedsheet to overcome late night acute hunger pangs in his early days of diet control. Hanging out with the boys too was ruled out since sleep, the best recovery mechanism, couldn’t be sacrificed.

Ronaldo is on the same page. He has said that there are days when he is a bit lazy, wants to spend extra time with his children, and enjoy the pleasures of family life. But he drags himself away to log extra gym miles. He makes hefty investment, endures torture to be faster and stronger. After every tough game, Ronaldo heads for his £50,000 Cryotherapy chamber. He is in it for three minutes as liquid nitrogen freezes him at a temperature as low as minus 200 degrees celsius.

Read |‘What a shame’: Cristiano Ronaldo’s girlfriend lashes out on Portugal’s manager for benching him against Switzerland

Despite these pains, professional sport is brutal. Physical fitness alone can’t be the shield to protect precious form. For all the modern-day gizmos and health regimes, late 30s remains the age when the ticking of the clock gets irritatingly loud. For those who have righteously propagated their fitness commitment and looked down upon the weak, it hurts to realize that they too have a stipulated sell-by date. Aging can be delayed, not defied – that is a bitter pill to swallow.

There is another reason super athletes detest being on the bench with the second-best and rookies. Ronaldo, like Kohli, since their junior days has this larger-than-the-dressing room persona. In team photos featuring Ronaldo or Kohli, the captions identified them can have ‘ones with halo’ in bracket. Skills, athleticism and brand make them stand out both on and off the field. Life away from spotlight, is no life for them. They are the proud peacocks of the garden, not those nervy house sparrows.

They are an aberration. Team sport celebrates collectivistic culture. Being compassionate, generous and sensitive to team-mates are considered novel virtues that coaches value and look for in leaders. Academies drill the ‘one for all, all for one’ motto in young minds.

In contrast, Ronaldo and Kohli are the brand ambassadors of the individualistic cultures that endorse assertiveness and solo performances. They have taken the less-treaded unpopular path to be proudly self-absorbed and unabashedly boastful in their successful pursuit to be the best-ever. They firmly believe, to the annoyance of the traditionalists, that team success is nothing but a sum total of individual success.

However, what they don’t understand is that with time and age equations change. Roles get redefined and periodic transition is what keeps the wheel moving. For the next Ronaldo or Kohli to emerge, the original needs to move away from the spotlight. In the shadow of the giants, the next crop wouldn’t get the sunlight it needs to grow.

The Indian sporting ecosystem hasn’t yet matured to occasionally bench their stars or tell them that the team isn’t a one-man army as it used to be. Portugal did that and is expected to repeat it. It’s tragic that Ronaldo might not even get the full 90 minutes in what could possibly be his last game on the world stage. So can he deliver?

If you take Kohli’s word, he can. In one of his many Ronaldo fanboy interviews, he goes back to a Champions League game where Real Madrid were trailing 0-2 against Juventus after the first leg. For the away game, Ronaldo invited his friends to the game and told them to be ready for a special show. He would go on to score a hat-trick, Madrid would win 3-2.

“That to me is a beast mentality. I can count people on one hand that can claim to do something like that and go on to do it. That mental strength inspires me,” he said.

If a Ronaldo faithful, Kohli, can hit those two sixes off Haris Rauf in the second last over of a high-pressure game, how can one rule out the master CR7 coming in as a substitute and score a winner in the dying minutes of World Cup quarter-final?