Manchester City were 4-0 up at halftime but continued to rip apart their League One opponents as they ran up the biggest margin of victory in an English cup semi-final. 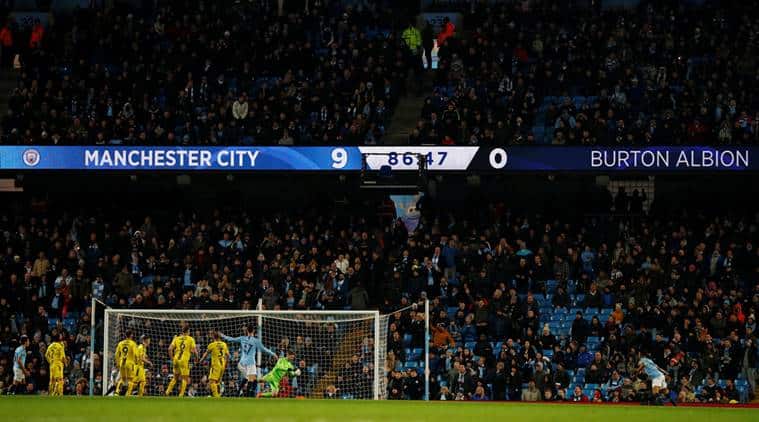 Gabriel Jesus scored four as defending champions Manchester City destroyed League One (third tier) Burton Albion 9-0 in their League Cup semi-final first leg to all but formally book their place in the final.

Burton, managed by Nigel Clough, the son of former Nottingham Forest manager Brian, must endure another 90 minutes at their own ground on Jan. 23.

City are set to face the winners of the other semi-final between Chelsea and Tottenham Hotspur, which Spurs lead 1-0 from the first-leg.

City manager Pep Guardiola fielded a strong starting line-up and his side quickly established their dominance with Kevin De Bruyne steering in a header from an excellent lofted ball from David Silva to open the scoring in the fifth minute.

It was 4-0 by halftime after two goals from Jesus and a long-range lob from Oleksandr Zinchenko and City showed no mercy after the break. Jesus added two more and substitute Phil Foden, Kyle Walker and Riyad Mahrez also found the net.

The result was the largest ever margin of defeat in the semi-final of the competition.

Merciless City approach was a form of respect: Guardiola Manchester City manager Pep Guardiola said his team’s merciless approach in the destruction of Burton Albion was a form of respect for their opponents and the competition.

“If you forget to continue (attacking) you don’t have respect for your opponent or for the competition,” said Guardiola.

“We spoke about it at halftime, to play simply and try to score more goals. That is the best way to respect the competition and opponent. The best way is to do what you have to do,” he said.

“The difference between the Premier League teams and League One teams, of course the quality of the players no doubt about that, but especially the rhythm. When you have that high intensity and rhythm for 90 minutes, in the end they go down,” he added.

Guardiola spoke with some Burton players on the field after the game and praised the club’s achievement in reaching the last four, a run which saw them beat Premier League Burnley, Championship Aston Villa, Nottingham Forest and Middlesbrough.

“Burton have had an incredible tournament. They have to be so proud, they did so well,” said the Spaniard.

“It is not very pleasant when you are losing by that scoreline but it was nothing more than we expected. The only thing we can make the players aware of is the runs their players make, but making them aware and stopping them are two different things.”

Asked if he wished that his team had not had to face such an opponent, Clough said it was important to remember Burton’s entire campaign.

“Do I wish we hadn’t played? Not at all, we have made history in getting this far,” he said.

“It wasn’t about tonight it was about the achievement of getting here. We kept going right to the end, they were shouting ‘we want 10’ and we stopped them, that’s a positive for us. Some of the youngsters have had an experience that you can’t buy.

“It’s not nice when the goals are going in and you can do nothing to stop it. Pep said come in for a glass of wine and I hope he’s got more than a glass. They are capable of doing that to Premier League teams,” he said.

Exclusive: Realme 3 to launch in Q1 2019; 48mp camera smartphone in the works